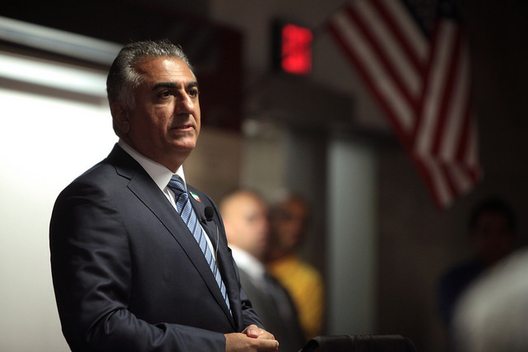 As a new round of crushing US sanctions against Iran goes into effect and the Iranian people’s frustration with their country’s economic and political situation grows, various foreign-based groups calling for the overthrow of the Islamic Republic have ratcheted up their rhetoric and activities. At the center of credible opposition forces in exile sits Reza Pahlavi, the last heir apparent to the throne of the Iranian monarchy.

Since his forced exile began in the United States following the 1979 Islamic Revolution that ousted his father, the well-spoken 58-year-old Pahlavi has consistently used his profile to oppose the policies and actions of the Islamic Republic. Though his message has evolved through the years, Pahlavi has most notably been calling for a referendum through which the Iranian people could decide their form of government within a secular democratic context.

Arguably difficult to implement without major conflict and bloodshed, Pahlavi’s vision may be starting to resonate with some of Iran’s 85 million people. Their alternative is an oppressive system that suffocates political and social reform, squanders funds on religious endowments and expansionist adventures in the region and suffers from chronic corruption, cronyism and mismanagement of economic and environmental resources.

Aside from the increasing discontent related to the Trump administration’s “maximum pressure” policy, some of Pahlavi’s surging momentum can be attributed to television programming produced by foreign-based, Persian-language satellite channels with murky sources of funding, such as the UK-based Manoto TV, which beam their monarchy-friendly content into Iran. To an extent, these networks have managed to tap into the hearts and minds of not only an older nostalgic base of monarchists, but also of younger Iranians. Many of them increasingly see no other alternatives for the future of Iran, conveniently ignoring Pahlavi’s lack of real leadership experience and his connection to another oppressive, albeit more secular and socially free, chapter in Iranian history.

Even though Pahlavi has insisted that he does not want to return and reclaim the throne, if that is the choice of Iranians, he has not had a true public reckoning of his father’s legacy. Mohammad Reza Shah was a controversial figure hailed as a modernizing and enterprising patriot while also rightfully criticized as an American-imposed strongman who advanced US interests in the region. He also crushed political dissent and ruled over a country with immense wealth inequality, ultimately sparking the fateful popular revolution led by the clerical establishment.

To the extent that Pahlavi doesn’t forcefully and unequivocally denounce specific crimes committed by his family and continues to carry his royal titles, he is marginalizing Iranians who want to break free of their past and embrace a truly democratic future. Also concerning is the lack of transparency in regard to the funding for his operations and the media outlets that promote his message, leading some to speculate the involvement of foreign governments with ulterior motives.

Perhaps the most troubling aspect of Reza Pahlavi’s growing support, however, is his supporters’ overzealousness and their clinging to his royal title. During a town hall-like event televised on another UK-based Persian-language channel, Iran International—which is directed by a Saudi businessman with possible links to Crown Prince Mohammed bin Salman—Pahlavi’s supporters asked him questions in a staged and sycophantic manner, making sure they addressed him by the title shahzadeh or ‘prince’ at every opportunity and sometimes breaking into premature applause. To them, any criticism of him or their mission equals support for the Islamic Republic, leaving no room for nuanced disagreement with their views. In fact, they routinely accuse critics on social media as being the agents of the Islamic regime. Their brand of political support is very Trumpian in that it is uncomfortably unwavering and promotes a hardline us versus them mentality. This black-and-white mindset is undemocratic and consistent with autocratic systems and cults of personality and, ironically, runs counter to the ideals communicated by the movement’s leader himself.

The Pahlavi support base must realize that even though the son of the late shah may be the leader that the opposition needs to move the ball forward, he must ultimately become one of many figures within a wider coalition that welcomes dissenting viewpoints. Otherwise, Iran will not truly progress.

Reza Pahlavi does present an ideal picture of Iran’s future, but his association with the legacy of the Pahlavi era, his lack of transparency and his supporters’ cult-like, undemocratic and backward-looking tendencies threaten the realization of his dream in its truest sense.

Saman Askari is the host of the podcast ‘talk iran’. He is also a San Francisco Bay Area technologist with an MBA from Northeastern University and an M.Eng. from MIT Zaragoza. An Iran enthusiast, he interviews various experts on his podcast focusing on political, historical and cultural issues related to Iran and Iranians. His podcast can be found on the major platforms and followed on talkiran.org or Twitter at @talkiran1.