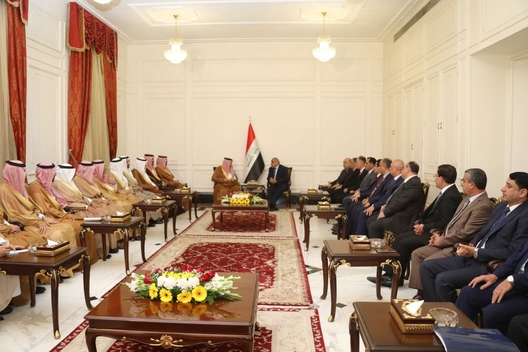 A Saudi economic delegation visited Iraq on April 3, seeking to promote the expansion of diplomatic and economic relations between the two countries—and to give Iraq an alternative to growing Iranian ties.This was the second meeting of the Iraqi-Saudi Coordination Council, which held an initial meeting in 2017. The Saudis offered a $1 billion loan for the creation of a sports complex to be known as Sport City. The council also announced the establishment of consular centers for visa services in Baghdad and two other Iraqi cities.

These positive developments in Iraq-Saudi relations are the latest chapter in a new Riyadh approach to Iraq which began in late 2015. Until then, Saudi Arabia refused to recognize the Shia-dominated government that came to power in Baghdad after the 2003 US invasion. From 2003 – 2014, Saudi Arabia tried to confront Iran’s influence in Iraq and the rise of pro-Iranian Shia political groups by supporting the Sunni insurgency against Iraq’s central government.

This policy did not succeed, and, in a major turnabout, Saudi Arabia re-established diplomatic relations with Iraq in late 2015. Diplomatic contacts and economic relations between the two countries have increased since then, as other Gulf Cooperation Council (GCC) countries such as Kuwait and the United Arab Emirates have also improved their relations with Iraq. In the meantime, the main objective of Saudi policy toward Iraq remains the same: reducing Iran’s influence in Iraq in the context of the ongoing Iran-Saudi proxy war.

Iraq’s economic, diplomatic, and religious ties with Iran have grown despite efforts by the United States and Saudi Arabia to diminish them. In 2016, Iran was the third largest exporter to Iraq after China and Turkey, and accounted for 16 percent of Iraq’s total imports. Iranian religious tourism to the Shia holy cities of Najaf and Karbala is the leading source of tourism revenue for Iraq. Even more significantly, Iraq, despite its own considerable energy sector, imports a large amount of natural gas and electricity from Iran. Iran also enjoys significant political influence in Iraq and has developed close ties with several Shia and Kurdish political factions.

From the Saudi point of view, the most important dimension of Iraq’s dependence on Iran is energy imports. Saudi Arabia is planning to provide Iraq with alternative sources of energy in an effort to reduce this dependency, but this will not be an easy task. Iraq, despite huge oil reserves, faces a shortage of electricity and relies on imported electricity from Iran to cover a portion of this shortage. Domestic electricity production in 2018 was 16,000 MWs and it also imported 1,200 MWs from Iran. Yet Iraq still faces an electricity shortage that in hot summer months exceeds 5,000 MWs.

Furthermore, in addition to direct electricity imports, Iraq relies on natural gas from Iran to produce a portion of its domestic electricity. As a result, about one third of Iraq’s electricity is produced directly or indirectly through energy trade with Iran.

In 2018, Iraqi officials intensified their efforts to find alternative sources for electricity imports for several reasons. First, Iraq has come under pressure from the United States to abide by US economic sanctions on Iran and reduce its energy dependency on that country. Given how hard this is to achieve in the short run, Washington has repeatedly provided waivers but with reluctance, emphasizing that these exemptions are temporary. The energy imports from Iran are also risky because in periods of high domestic demand, Iran might reduce or even stop energy exports to Iraq. This happened in the summer of 2018 and led to severe power outages in southern Iraq. These shortages caused massive street protests, especially in the southern port city of Basra, against the Iraqi central government and Iran.

Iran defended its reduced electricity exports to Iraq because of rising domestic needs, but Iraqi officials criticized this policy and decided to approach Saudi Arabia as a potential alternative source. This development has provided Saudi Arabia with an opportunity to use energy trade to gain more political influence in Iraq. In June 2018, the spokesman for Iraq’s Ministry of Electricity, Musab Sari al-Mudaris, announced that Saudi Arabia had agreed to launch a solar power plant with production capacity of 3,000 MWs in its northern region near the Iraqi border for electricity exports to Iraq at a discounted price. Although there has been a dispute about the accuracy of this report, the potential for energy cooperation between Saudi Arabia and Iraq remains strong and the United States is also putting diplomatic pressure on Iraq to expand these ties in order to reduce Iraq’s dependence on Iran.

The warm reaction of the Iraqi government to Saudi initiatives does not imply that Iraq will abandon its economic and diplomatic relations with Iran. Rather it appears that Iraq is trying to create a balance in its relations with Iran and its Sunni Arab neighbors. This balanced approach was evident in Iraqi President Barham Salih’s April 2 interview with Asharq Al-Awsat in which he emphasized that “Bolstering relations with the Kingdom is an integral part of our vision for what Iraq’s ties should be like.” He added, “It is in our interest to enjoy good relations with Iran based on common interests.”

In light of Iraq’s ethnic mix and the proportional representation of Sunnis, Shias, and Kurds in its political institutions, remaining neutral in the Saudi-Iran proxy war will serve Iraq’s interests well. Hence it should come as no surprise that after his April 6 visit to Tehran, Iraq’s Prime Minister Abdul-Mahdi plans to visit Riyadh later this month.

Nader Habibi is a Henry J. Leir professor of practice in the economics of the Middle East at the Crown Center for Middle East Studies in Brandeis University. He focuses on economic conditions of Iran and GCC countries. Follow him on Twitter: @NaderHabibi2.

Omid Shokri Kalehsar is a Washington-based senior energy security analyst, currently serving as a visiting research scholar in the Schar School of Policy and Government at George Mason University. Omid is a PhD Candidate in international relations at Yalova University, Turkey. Follow him on Twitter: @ushukrik.