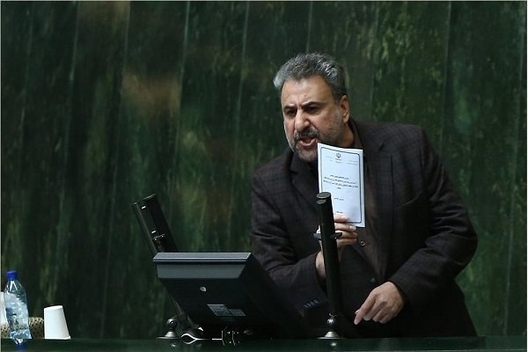 Iran’s Supreme Leader, Ayatollah Ali Khamenei, supported by religious conservatives, has the last word on major Iranian policy decisions, including relations with the United States. His long-standing position has been “no talks, no relations with America,” especially after US unilateral withdrawal from the nuclear deal in May.

But there are signs that this hard line is softening.

Heshmatollah Falahatpisheh, head of parliament’s influential national security and foreign policy commission, said in a recent interview, “There is a new diplomatic atmosphere for de-escalation with America. There is room for adopting the diplomacy of talk and lobbying by Iran with the [political] current which opposes [the policies of] Trump [toward Iran]… The diplomatic channel with America should not be closed because America is not just about Trump.”

The statement by the 47-year old Falahatpisheh, a high-ranking theorist trusted by centers of power in Iran, reveals a completely new understanding within at least part of the deep state of the dynamics of politics in the United States. Such an evolution may lead to a policy shift that could eventually break open the stalemate in Iran-US relations.

In the past, Khamenei has argued that talks that could lead to restoring diplomatic relations with the Americans would be costly. Khamenei fears that the Americans would aggressively enter the Iranian market, sideline other industrial countries and become the dominant foreign actor in Iran, thus empowering pro-US white-collar workers and technocrats in the country. This development could lead to the expansion of US economic and, more threateningly, “cultural” influence and could shake the authority of the religious establishment and system. American pop culture, according to Joseph Nye, who coined the term “soft power,” is an important element of America’s global influence.

Shortly after the culmination of the 2015 Joint Comprehensive Plan of Action (JCPOA) between Iran and six world powers, Khamenei banned further negotiations with Washington, saying, “Negotiations with the United States open[s] gates to their economic, cultural, political, and security influence.” He added, “Through negotiations, Americans seek to influence Iran. But there are naive people in Iran [implicitly alluding to President Hassan Rouhani and others who support détente with the US] who don’t understand this.”

However, since President Donald Trump withdrew from the JCPOA in May and began restoring sanctions lifted by the deal, Iran’s economy has been hit hard. The currency, the rial, has lost 80 percent of its value against the US dollar in the past twelve months.

To make matters worse, Iran faces the threat of being blacklisted by the Financial Action Task Force (FATF), an intergovernmental organization tasked with combating financial crimes including money laundering and terrorism. To avoid blacklisting, Iran must carry out nine actions. The watchdog body said on October 19 that Iran had until February to complete reforms that would bring it into line with global norms or face consequences that could completely isolate Tehran from the international banking system.

To meet the nine FATF requirements, the Rouhani administration introduced four bills in parliament. Two bills—authorizing Iran to join the Combating the Financing of Terrorism (CFT) Convention and the UN Convention against Transnational Organized Crime (the Palermo Convention)—sparked a fierce battle between hardliners and centrists. Combining resistance to financial transparency and to the “imperial West,” the deep state, dominated by hardliners, is strongly opposed to acceding to the FATF requirements.

However, Iran must satisfy these requirements to survive the coming sanctions avalanche. By doing so, it will make it easier to solidify European Union support in confronting Trump’s punitive policy of “maximum pressure” toward Tehran. The EU is reportedly setting up a special purpose vehicle (SPV) to allow Iran to trade with European companies and bypass the US financial system.

On June 20, Khamenei fiercely attacked the bills that authorized joining the two conventions. “These conventions are cooked up in the think tanks of the great powers securing their interests and for the sake of their benefits,” he remarked. Many thought that the hardliners had won the battle.

But in an unexpected reversal on September 10, Falahatpisheh announced that Khamenei had authorized the “administration and the parliament” to decide about dealing with FATF. Khamenei turned his back on conservatives, his social base, and gave the green light to the moderates to resolve the issue.

Iran’s parliament, led by speaker Ali Larijani, whose views are closer to Rouhani than to the hardliners, pushed for ratification of the bill on joining the CFT convention during a contentious closed session on October 7. At the session, lawmakers voted 143 in favor of and 120 against; five abstained. The Guardian Council, a supervisory body led by the ultra-conservative Ayatollah Ahmad Jannati, who cannot even pronounce FATF, has yet to approve the bill. However, Khamenei’s silence in this matter suggests that the Council will eventually approve it.

It was in this context that Falahatpisheh spoke of engaging Americans who oppose the Trump administration’s harsh line on Iran.

Even Iran’s Islamic Revolutionary Guard Corps (IRGC), which for two years attacked the idea of submitting to FATF requirements, has changed its approach. The latest issue of the IRGC weekly political organ, Sobhe Sadegh, features an interview with Mehdi Pazouki, an economist who supports joining FATF. In the interview, he describes the risks of rejecting the organization’s recommendations.

These developments, which seem to be coordinated and not just ad hoc reactions, will, if pursued, disappoint the hawks in the White House, who hoped by going hard on Iran to provoke a radical response and even prod Tehran to stop implementing the JCPOA and thus alienate the Europeans. The emergence of the thesis of trying to talk to Trump’s opponents, in particular, must be evaluated as to its feasibility. However, this new reality will probably determine the trajectory of Iran’s foreign policy at least until the end of Rouhani’s second term and Trump’s first and possibly only term.