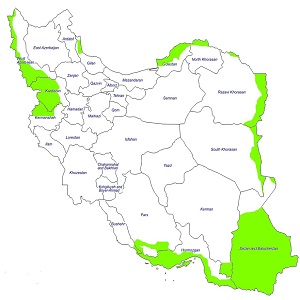 In her issue brief for the Atlantic Council, “Iran’s Sunnis Resist Extremism, but for How Long?” Scheherezade Faramarzi discusses the current situation of Sunnis in Iran. While Faramarzi’s work is valuable given her fieldwork in Iran, in the view of this author, her piece contains errors and misleading information.

I agree with Faramazi that the Islamic Republic of Iran has failed to properly integrate its Sunni population into the political system by depriving them of higher political positions such as cabinet ministries. However, I disagree with her presentation about the number of Sunnis in Iran, where they are concentrated and their socio-economic status in comparison to the majority Shia population.

According to Faramazi, “Some fifteen million of Iran’s eighty million people are Sunni Muslims, the country’s largest religious minority.” She suggests that according to Sunni leaders and observers, Iran’s Sunni population is somewhere between “12 to 25 percent” of the total population. My research suggests that the percentage is ten percent or about eight million people.

I also disagree with a map in the issue brief that highlights Sunni regions of Iran and with claims that Sunnis generally have worse socio-economic conditions than Shias.

There are no official statistics in Iran for the number of Sunnis and Shia and the last known survey on this question was conducted in 1949, when the Sunni population was put at about eight percent. However, it is possible to estimate the current Sunni population.

Using the Telegram app and Skype, I compiled data by interviewing Iranians in provinces with a significant number of Sunnis. I examined interviews by Sunni religious elites in national and local media, in which they discussed the percentage of Sunnis in their province or county. I also collected data from health centers, where information on the religious denomination of individuals is available. Finally, I obtained information from blogs, written mostly by Sunnis.

Faramarzi also suggests that almost all of Hormozgan province except for Minab and Bandar Abbas is Sunni. Yet, the three counties of Bashagard, Hajiabad, and Rudan are also Shia majority. According to a Sunni cleric of Hormozgan, Abdul Baeth Qattali, the Sunni Friday prayer Imam (Imam jomeh) of Bandar Abbas, Sunnis constitute 40 percent of the population in the province.

Below I have created a map to show what I believe are the Sunni regions of Iran.

The Sunni Minority and Development

Faramarzi argues that Sunnis have also been disadvantaged economically. She writes that “unemployment is high in Sunni-majority areas” and that they suffer from “poor government services” although she says this may be because they live in remote areas.

Using data from Iran’s Statistical Center and looking at unemployment rates, public hospital beds, health houses and literacy rates, I have come to a different conclusion.

The second figure demonstrates two different indicators. The first indicator, shown in the form of bar graph, is the number of health houses (Khaneh Behdashat), which provide medical care in rural areas, per 1000 population. The second indicator, shown in the form of a line, indicates the number of public hospital beds per 1000 population. Sistan and Balochistan, a Sunni-majority province, suffers from the lowest number of public hospital beds. However, it is followed by Kohgiluyeh, North Khorasan, and South Khorasan provinces, three Shia-majority provinces. The two Sunni-majority provinces have a higher number of health houses per 10000 people than the national average.

A comparison of literacy rate suggests no meaningful difference between Shia and Sunni counties. In fact, the Sunni-majority counties have a slightly higher literacy rate than Shia-majority areas.

West Azarbaijan is a province in the northwest of the country with a 42 percent Sunni population. While the southern part of the province is made up of Sunni-majority counties, Shias are the majority in northern counties. Each of the selected counties has either more than 85 percent Shia population or Sunni population. As Figure 4 suggests, there is no meaningful distinction between Shia-majority and Sunni-majority counties in West Azarbaijan as well.

In conclusion, I would like to emphasize three major points. First, it is true that the Sunni population in Iran is unable to reach higher political roles such as cabinet ministers and governorships as well as president and Supreme Leader, although a number of Sunnis have been appointed as Bakhshadar (district governor) and Farmandar (county governor) in recent years. Sunnis can also serve in the Assembly of Experts, contrary to what Faramazi has written. In fact, currently three members of the Assembly represent the Sunni population – one from Sistan and Baluchistan and two  from Kordestan.

Second, Sunnis constitute ten percent or eight million of the Iranian population, rather than 15 million. Third, according to my research, the government does not systematically and intentionally favor Shias over Sunnis in its socio-economic policies.

Peyman Asadzade is a PhD student in the Political Science department at the University of Central Florida.