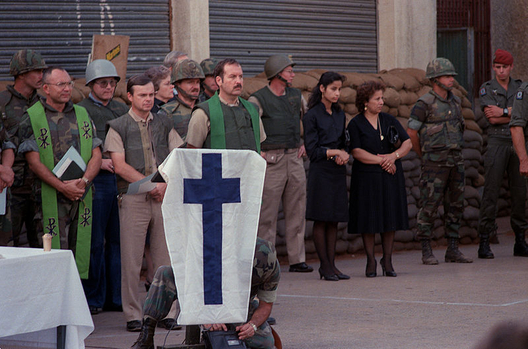 Chaplains, U.S. Marines and family members observe a moment of silence at memorial services for the 241 Marines killed during the terrorist bombing of the barracks at Beirut International Airport (Wikimedia Commons)

Thirty-five years ago, Iran-sponsored terrorists drove a truck laden with explosives into the U.S. Marine Corps barracks in Beirut, Lebanon, killing 241 U.S. service members — 220 Marines, 18 sailors, and three soldiers — and injuring many others, some severely. It was the single deadliest day for the Marines since World War II. The U.S. Embassy in Beirut had been victimized six months earlier by a terrorist bombing that left 63 people dead, including 17 Americans, among them several U.S. soldiers and a U.S. Marine.

At the time of the October 1983 attack, I served as the Marine Corps Senate liaison in the Russell Senate Office Building. The tragedy began several weeks of intense work to try to understand what had happened, and to respond to the deep concerns of senators, their staffs and the public at large regarding the welfare of the Marines and their families. The country’s pain, which intensified as the magnitude of the losses became clear, remains undiminished to this day.

It is clear that Iranian surrogates were behind the attack (it’s reported that, in 2004, a monument was erected in Tehran to celebrate the bombers), just as there is no question that Iran remains the prime exporter of international terrorism today. While the evil done that day can never be undone, the Trump administration has a chance to help achieve a measure of justice for the families of U.S. service members killed in the attack, to punish those responsible for the despicable act and to deter state sponsorship of terrorist groups and their deeds.

After a decade-long legal battle, the families won a landmark judgment against Iran in federal court for its role in sponsoring the attack. Iran, of course, refuses to honor the judgment. As a result, the families initiated an enforcement action against $1.67 billion in Iranian assets secretly laundered through New York by Clearstream, a Luxembourg-based financial institution. The legal battle over these funds has raged for years, with Clearstream and Iran arguing for the return of the funds to Iran’s central bank. Attempting to thwart enforcement of a court order, Clearstream claimed the money was located outside the United States, and therefore beyond the jurisdiction of our courts.

Last year, the U.S. Court of Appeals for the Second Circuit ruled that the funds could be ordered returned to the United States, where they could be used to satisfy the judgment against Iran. Iran has petitioned the Supreme Court to review this decision. Clearstream has committed to not returning the funds to Iran while the legal process unfolds.

The Supreme Court recently requested the Trump administration’s views on whether it should grant Iran’s petition. An interagency group led by the Department of Justice Solicitor General’s Office has been tasked with developing the U.S. government’s response to the Supreme Court’s query. By recommending that the court deny Iran’s petition, the administration could help the Marines’ families and achieve an important U.S. foreign policy objective in the process. It should be a national security priority to prevent the return of this substantial amount of money to the Central Bank of Iran, particularly given Iran’s funding of terror and since the administration plans to re-impose nuclear deal-related sanctions relating to that very same bank.

Last month, President Trump graciously invited the Beirut Marine families to the White House to commemorate the 35th anniversary of the attack. As the president noted during his remarks, Iran was instrumental in founding Hezbollah, the terrorist group that carried out the attack, “and remains its main patron today.” He pledged to reinstate all nuclear-deal sanctions against Iran on Nov. 5 to “target, disrupt and dismantle their operational and financing networks,” such as that which Clearstream used to launder the $1.67 billion for Iran. The president pledged that “we will never forget what they did to our great Marines in Beirut. We will never forget.”

Many of the administration’s most senior officials attended this unique White House event and are aware of the historic opportunity before them. While the response to the Supreme Court’s request should be obvious, there may be “pockets of resistance” within the interagency process that could actually advocate that the funds in question be returned to the Central Bank of Iran. As a matter of national security policy, this must not be allowed to happen. The irony of the Iranian government seeking the support of the Trump administration against the families of the 241 U.S. service members that Iran murdered 35 years ago is not lost on our nation. For Marines and their families, “Semper Fidelis” is not just a motto, it’s a way of life and it is what unites us in this effort.

This administration has an opportunity to teach Iran that “what goes around comes around” is not just an empty slogan in the context of the Beirut Marine families’ remarkable quest for justice. In consoling the families after the attack, President Reagan said, “Words can never convey the depth of compassion that we feel for those brave men and for their loved ones.”  Today, the actions of the Trump administration can help demonstrate it.

Like her Marines, America will never forget Iran’s attack on the morning of Oct. 23, 1983, or the nation’s enduring obligation to deter and defeat such acts of evil.

This piece originally appeared on The Hill.