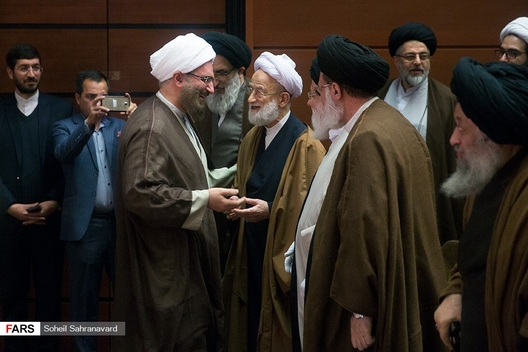 The change was the latest in a series that started about two years ago. The most important so far has been the appointment of Muhammad Javad Haj Ali Akbari as the Friday imam of Tehran in December 2018. Haj Ali Akbari had been chosen as the chief of the “Imams of Friday Prayer Policy Council” a year earlier. The organization is an umbrella body that manages Friday prayers in Iran and nominates prayer leaders to the Supreme Leader, who makes the appointments. Under the auspices of this body, 273 Friday Prayer imams have been replaced over the past two years. Most of the new prayer leaders are young clerics and often pupils of Khamenei, rather than independent traditional clerics of the Qom Seminary.

More than 900 Iranian cities have weekly Friday prayer gatherings led by imams designated by the Supreme Leader. Imams have to pass a political exam and prove their loyalty to the Iranian regime. Each week, the Friday Prayer Policy Council provides pamphlets for the imams that dictate the outlines of the contents of their sermons. Traditionally, a Friday prayer is composed of two sermons. The first is devoted to religious issues and the second to political ones. This gives the Supreme Leader a very efficient means of convoying his views to followers throughout the country in a consistent way.

Imams are the most prominent and influential representatives of the state in the realm of religion. While governors and local Islamic Revolutionary Guard Corps (IRGC) commanders represent the government and the military respectively, the Friday imams represent the religious authority of the state. As direct representatives of the Supreme Leader, the prayer leaders exert considerable influence over their cities in religious and non-religious matters.

Since the 1979 revolution, congregational Friday prayers have been one of the primary venues of support for the state. At the beginning, prayers were led by prominent clergy and supported and attended by the general religious population. Gradually, however, the weekly meetings became politicized and politics overshadowed the prayers’ devotional dimension. As a result, attendance at the prayers has declined even among traditional conservatives.

Furthermore, numerous reports of luxury lifestyles, misuse of public facilities and fraud by imams and their families have tarnished the image of the institution. For example, in February, news broke on social media that Mohammad Ali Mousavi Jazayeri, the Friday prayer imam of Ahvaz, flew to London for medical care. Though his office claimed that the trip was to “spread the message of the Islamic Revolution to Europeans,” an opposition website asserted that the trip was for liposuction surgery. Jazayeri was forced to resign shortly afterwards. Similarly, Mohammad Naqi Lotfi, the imam of Ilam, a city in western Iran, had to resign after he was spotted driving a luxury car and attending an extravagant banquet in Tehran. There have been several other such cases in the last year.

Though the reshuffling of imams is partly an attempt to restore the allure and religious image of Friday prayers for younger generations, there are also political motives. The old generation imams are often appointees of Ayatollah Ruhollah Khomeini, the founder of the Islamic Republic and Khamenei’s predecessor. They thus retain some degree of independence in their political views and religious convictions. The new generation imams, in contrast, are mostly Khamenei’s pupils and are chosen not because of their seminary status and educational rank but because of their political loyalty. Often, they have strong connections with the IRGC and are sometimes even nominated by IRGC leaders.

This conflation of local clerics and the IRGC is significant because from the beginning of the revolution, differences between young IRGC members and local clerics have been one of the main sources of tensions in the provinces. With new imams being closer to the IRGC, and traditional ulama of Qom losing their last official vehicles of influence, the political environment in the provinces is likely to become more monolithic.

The situation also reflects the progressive growth of IRGC influence in other areas of Iranian life. There is even a specific brigade of clergy: the Brigade of Eighty-Three Imam Sadeq.

While the regime seeks to shore up political unity, ironically, the weakening of the educational weight and seminary credit of Friday imams is exacerbating popular distrust of state-sponsored religiosity and strengthening non-state providers including traditional apolitical ulama.

The political system is gradually losing its religious legitimacy and rival institutions are filling spiritual demands in the marketplace of religion. This is a two-way process: Traditional centers lose their state-controlled vehicles such as Friday prayers and look for new means of marketing their message while traditional religious people become disappointed with state-sponsored religiosity and seek independent ulama. They fit together in an emerging trend: the restoration of traditional apolitical religiosity rivaling the political Islam of the government. This dichotomy is behind most of the recent tensions in the religious institutions in Iran and will likely shape the course of events in matters of religion in the future.

Mahmoud Pargoo is an expert on religion and politics of post-revolutionary Iran and a PhD graduate in Social and Political Thought from Australian Catholic University at Sydney. Follow him on Twitter: @mpargoo.