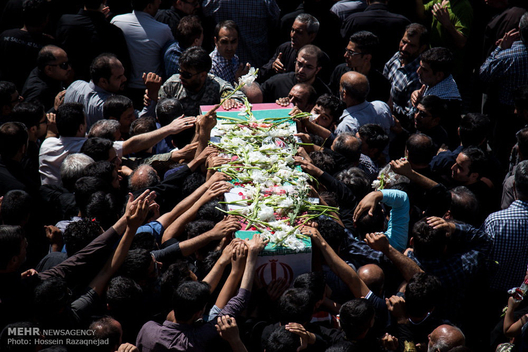 Every so often, the Iranian Committee to Find Missing Soldiers of the Iran-Iraq War announces the return of soldiers’ remains. A funeral procession of coffins draped with the Iranian flag—sometimes only containing a dog tag—is followed by hordes of Iranians wailing and mourning, as if the eight-year war only ended yesterday.

To this date, tens of thousands of Iranian and Iraqi families await news of their shahid-e gomnam, nameless martyrs. These images are a reminder of the sacrifices made thirty years ago and tells of a country in perpetual mourning about that very war. It also speaks to a reality: Each recovered shahid-e gomnam reinforces Iran’s foreign policy today.

Fresh from the 1979 revolution that toppled the shah, the newly founded Islamic Republic was caught off-guard in September 1980 when Iraqi dictator Saddam Hussein launched an invasion. A weak country preoccupied with post-revolutionary turmoil, Iran purged its armed forces of shah era military figures either by exile or execution, and dramatically reduced its military budget by one third, giving Saddam the impression he had the upper hand and an easy win as the new regional strongman.

Saddam’s plan backfired, however. If anything, the Iran-Iraq War hardened the Islamic Republic’s existence, allowing Ayatollah Ruhollah Khomeini’s government to consolidate power and further repress other political factions involved in the revolution. With many Iranians embracing nationalism and eagerly defending their country against Iraqi forces—what Iranians refer to as the “imposed war” or “holy defense”—public scrutiny of the newly-founded theocracy waned. The war also helped with the maturation of the Basij militia and the Islamic Revolutionary Guard Corps (IRGC), which still play integral roles in Tehran today.

For Iran, the war was spent in isolation, with no real allies to rush to its aid. Tehran had to rely on the black market, paying outrageous prices to purchase military hardware during the war due to an embargo—the Iran-Contra affair being a notable exception. While Baghdad was openly bankrolled by neighboring Arab countries including Kuwait and Saudi Arabia, Tehran merely relied on Libya and Syria as allies in the Middle East and North Africa. The United States and Europe discreetly supported Saddam by providing arms and even raw materials for chemical weapons. When Saddam targeted Iranian cities—including the capital Tehran—with some 200 missiles, there was minute international condemnation.

Without the international community restraining the Iraqi dictator, Saddam seized the opportunity to use chemical weapons—nerve gas, including mustard and sarin—on Iranian soldiers and civilians. On numerous occasions, Tehran complained to the United Nations about the 1925 Geneva Protocol violations, yet a case couldn’t be built against Baghdad.

The US intelligence community had hard evidence that Saddam was using chemical weapons as early as 1983, but didn’t want to help Tehran. In fact, during 1988, the US provided Saddam’s forces with satellite imagery and maps of Iranian troop movements, worried the war was tipping in Iran’s favor. According to American historian Nikki Keddie, “The United States, knowing it was untrue, also said Iran was partly responsible for chemical warfare attacks on Kurds [in Iraq] and used this story to deflect international condemnation of Iraq.”

The war ended on August 20, 1988 with a ceasefire two months after the USS Vincennes accidently shot down an Iran Air flight killing 290 passengers on board, which the United States has never formally apologized for and even provided a medal to its captain. There are various estimates of wartime casualties from one million on both sides to an estimated 680,000 lives, making the Iran-Iraq War one of the longest and bloodiest wars of the twentieth century.

The wartime isolation Tehran experienced during that period served as a lesson on the importance of self-reliance, to the point that it worked tirelessly to increase its military capabilities over the past thirty years in order defend its territory and its people. Iran views itself as continuously under threat, especially from the United States and its allies, which has created a siege mentality among the governing elite. Over the span of seven US administrations, Tehran has faced threats of sanctions, war, and regime change.

The Iran-Iraq War is frequently cited by Iranian government officials as the foundational basis of Tehran’s foreign policy today. In an op-ed for the Washington Post, Iranian foreign minister Mohammad Javad Zarif argued that the lack of defense during the eight-year conflict drives their current ballistic missile program: “It is against this backdrop that we develop and test our indigenous defensive capabilities. We have no other choice, as we continue to face major hurdles in fulfilling our military hardware needs from abroad, even as our neighbors procure such hardware in mind-boggling quantities.”

Today, Iran has over half a million troops between its army and the IRGC, many of which are poorly trained draftees. Most of its military hardware was purchased pre-1979 by Mohammad Reza Shah Pahlavi, including an aging air fleet of F-14 Tomcats—the only active ones in the world—which are outclassed by all of its regional foes. What Tehran lacks in superior military weapons systems, it makes up for by patronizing proxies throughout the Middle East as a deterrent, including Lebanese Hezbollah, Shia militias in Iraq and Syria, and limited backing of Yemen’s Houthi rebels, as well as Hamas and Islamic Jihad in the Gaza Strip. Its ballistic missile program, initially acquired in the late 1980s in retaliation for Iraq’s missile attacks, aren’t yet accurate, as demonstrated by Tehran’s medium-range missile launch in June 2017 on Islamic State of Iraq and al-Sham targets in Syria.

In truth, Tehran’s ability to project power in the Middle East is limited. However, the more the United States tries to contain Iran and threaten it with “all options on the table,” the more Tehran holds on to its Holy Defense foreign policy, though its becoming less popular amongst some Iranians on the ground. During the recent Iran protests, chants continuously broke out against the money flowing into Iran’s regional proxies.

When Iranians once spoke of the Iran-Iraq War generation, they used to be referring to those who fought in the war or were born during the eight-year conflict. Now, with an entire post-war generation born after the fact, little ties younger Iranians to the trenches beyond family stories, war relics in the form of murals and streets named after martyrs, and the occasional relative or friend with war wounds or post-traumatic stress. For this post-war generation who have now come of age, Iran’s foreign policy can be a difficult sell.

The trauma of the Iran-Iraq War still exists for many Iranians, but as the conflict fades into the pages of history, it’s becoming increasingly challenging for the Iranian government to convince the post-war generation they are the only bulwark against a perceived existential threat—although the Trump administration is fulfilling that presumption. Without an immediate tangible threat against Iran, the post-war generation are going to continue demanding change.

Image: Iranians gather to bury a 17-year-old diver who was martyred during the Iran-Iraq War on August 12, 2015. (Mehr News Agency)