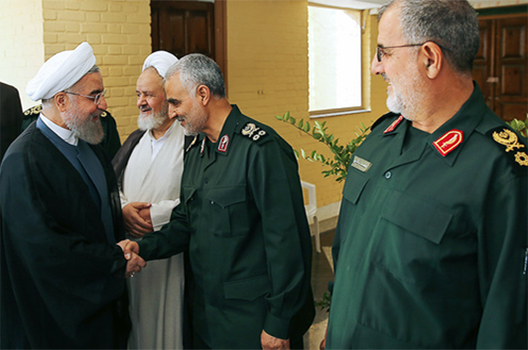 Throughout the past four decades, US observers have disagreed about the nature of Iran’s factional politics and some have even questioned whether real differences exist.

Rising tensions in the Persian Gulf seem to reflect Iran’s unified reaction to the US “maximum pressure” campaign. This campaign includes not only the imposition of a near-total oil embargo on Iran but also an increased US military presence in the region.

However, current developments—including Iran’s downing of a US drone and attacks on oil tankers—can also be seen as the initiative of the Islamic Revolutionary Guard Corps (IRGC), which felt threatened by the 2015 nuclear deal.

The behavior of the IRGC should be seen in the context of domestic incidents in Iran.

In the past few weeks, the Islamic Republic of Iran Broadcasting (IRIB), whose head is appointed by Supreme Leader Ayatollah Ali Khamenei and which is usually very supportive of the IRGC, has aired two programs undermining key figures in the government of President Hassan Rouhani.

First was a segment that visualized one of the routes Iran uses to bypass US sanctions on Iranian oil exports. This was aired at a time when Iran’s Petroleum Minister Bijan Zanganeh has been very tight lipped about such mechanisms to avoid prejudicing them. Zanganeh has also refrained from giving any data about Iranian oil production and exports since the re-imposition of US sanctions.

The second way in which IRIB sought to undermine the Rouhani government and prevent a return to negotiations with the US was the broadcast of a television series called, “Gando.” The series, produced by high level security elements in Iran, portrayed Iranian foreign minister and chief diplomat Mohammad Javad Zarif as a powerless and misguided official who made major mistakes and was not tough enough toward the “enemy,” namely the United States.

Both shows were hailed by hardline figures inside the Islamic Republic but faced harsh criticism from Rouhani’s administration. Hardline news outlets leaked a letter from the government claiming that Rouhani has threatened to cut the budget of IRIB, raising tension between the state broadcaster and government to a higher level.

The rift between the two is nothing new. During the previous round of negotiations between Iran and world powers, which resulted in the Joint Comprehensive Plan of Action, IRIB covered the process with harsh criticism and analysis based on misinformation, which often angered Rouhani. At the time Ali Younesi, an advisor to Rouhani, called IRIB the media of “opposition” and government spokesman Baqer Nobakht repeatedly called on the organization to conduct itself based on “national interests.”

Another example of how the rivalry between the IRGC and elected officials plays out is the detention of foreign and dual nationals. From The Washington Post’s Jason Rezaian to the recent case of French Iranian political scientist Fariba Adelkhah, individuals who support engagement with the West become hostages of the IRGC to preserve and, if possible, increase its power in the Iranian system.

While Iranians coalesce against outside threats, most would prefer an atmosphere more conducive to Iran’s reintegration into the international community. However, IRGC officials have repeatedly voiced satisfaction over the current climate of confrontation. For example, Qassem Soleimani, the head of the IRGC’s elite Quds force, said on July 18 that “the sanctions can be used as an opportunity.” Soleimani, who was speaking at the opening of a factory producing herbal medicine, said this opportunity could result in ending Iran’s reliance on oil revenues.

For the IRGC, confrontation with the US not only boosts its image but makes it an even more essential player in Iran’s economy. The guards were granted many contracts in different major infrastructure projects in past years, specifically when harsher sanctions hit Tehran and made IRGC companies one of the only possible substitutes for foreign firms leaving Iran. A handover of development of a phase in the South Pars gas field to the IRGC-affiliated Khatam al-Anbiya construction giant is only one example.

Ultimately, however, the Supreme Leader must sign off on the IRGC’s confrontational stance and decide what mix of diplomacy and pressure is the appropriate response to the Trump administration’s anti-Islamic Republic campaign. With tensions rising in the Persian Gulf—as the IRGC seized a British tanker in apparent retaliation for Britain holding an Iranian tanker commandeered off Gibraltar—Iran must be careful not to push too far.