International human rights organizations and the United Nations are saying a lot about the repressive “Regulatory System for Cyberspace Services Bill”—widely referred to as the “Protection Bill”—currently under review by the Iranian parliament. However, not much light has been shed on one of the most marginalized groups that will suffer the most: Iran’s LGBTQI community.

Deprived of public spaces by the state and rampant queerphobia in society, Iran’s LGBTQI persons have found solace in fragile pockets of expression online. For as long as the Internet has existed in the country, state surveillance has been intensifying and crackdowns have been reoccurring on dissenting voices. Queer expression and identities are targeted as “immoral” or “obscene” criminal acts within Iran’s Islamic Penal Code and, in some cases, are punishable by the death penalty. Despite this, the queer community has been using social media, dating apps—like Grindr, Hornet, Bumble, and Tinder—along with messaging apps like WhatsApp and Telegram in creative ways to forge a semblance of community online.

The Internet has provided the Iranian LGBTQI community with a safer space to seek human connections vital for support and survival. The community has also utilized social media to educate itself and wider society about queer issues. Most importantly, online spaces have become vital for processing and healing trauma rooted in misogyny and queerphobia.

All these hard-earned but fragile gains can be eroded, or at least severely impaired, if Iran’s parliament, as expected, proceeds with ratifying and implementing this oppressive piece of legislation.

Several key provisions in the Protection Bill pose an imminent threat to freedom of expression in Iran and endangers the LGBTQI community in particular. The bill envisions tightened state control over online spaces and aims to erode online anonymity while criminalizing VPNs (Virtual Private Networks)—essential tools for circumventing online censorship.

Under the bill, control over key communication infrastructure will be delegated to armed forces and security agencies—including the Islamic Revolutionary Guards Corps (IRGC) and police force—that have a history of cracking down on marginalized communities. These agencies, which lack transparency and have been the main perpetrators of the persecution of LGBTQI persons in Iran, would be in a position to shut down and surveil the Internet with increased impunity and ease.

Data reviewed by ARTICLE19 from 2018 research and forthcoming reports indicate that, just like the broader Middle East and North Africa region, the security apparatus of the Islamic Republic is using online surveillance and entrapment techniques for identifying, intimidating, and prosecuting LGBTQI persons. Handing these malign actors increased surveillance power could translate into heightened targeting of marginalized and at-risk communities.

One of the most concerning provisions of the bill is a chapter which, in practice, would lead to the introduction of a blanket ban against all international services, especially social media platforms and encrypted communication tools. Iran already has one of the most censored online spaces in the world, where all major social media platforms—except Instagram—are banned.

The imposition of such a blanket ban, coupled with provisions in the bill that aim to criminalize VPNs, would severely curtail access to encrypted communications and platforms outside the control of authorities inside Iran. In a country where authorities have no qualms in policing private lives and criminalizing queer bodies and expressions to the extreme of the death penalty, encrypted and independent communication tools are one of the last barricades protecting people’s online privacy.

In-depth research by ARTICLE19 senior researcher Afsaneh Rigot chronicled how digital “evidence” of queerness is central to police arrests and prosecutions of LGBTQI persons in Egypt, Tunisia, and Lebanon. This was applied under a patchwork of laws, often involving vague definitions of morality or debauchery. Rigot’s previous research, and ARTICLE19’s forthcoming work, indicate that a similar trend is emerging in Iran, where online expressions of queerness are prosecuted as “corruption on earth” and “deviant” or “immoral” acts. The organization also received testimonies about dating apps and online queer spaces being infiltrated by security forces to entrap LGBTQI individuals.

In Iran, online anonymity and encryption aren’t enough to prevent the targeting and identification of at-risk groups. Similarly, users in Iran live in a climate where state actors are on the watch to spot the smallest “blunder” in order to identify users and mount charges against them. What little protective shields there were to help users will be withered away with the enforcement of the Protection Bill.

The Islamic Republic also hopes to push people onto local platforms linked to state agencies by curtailing access to secure communication tools. These platforms don’t use encryption and would not hesitate to share user data with authorities. Bereft of privacy protections, especially from the state, online spaces will turn into hunting grounds for security agencies, where they can roam with impunity.

Furthermore, provisions in the bill aim to reinforce the Islamic Republic’s data localization push. The bill will either result in users emigrating to local services or potentially strong-arming international firms into hosting users’ data inside Iran. The latter can lead to a situation where authorities can pressure the companies into surveillance and censorship operations, as seen in countries such as Russia.

With authoritarian states increasingly relying on digital “evidence” to persecute and prosecute at-risk groups like the LGBTQI community, data localization can turn online spaces into a treasure trove for security agencies.

The bill also requires platforms to “authenticate” users, tying their legal identity to their online persona. This will remove online anonymity, pushing users toward more self-censorship if not total withdrawal from online expression.

Many Iranians, including the queer community, rely on online anonymity to evade persecution at the hands of state actors. The institutions responsible for this persecution include Iran’s Cyber Police as well as the numerous cyber divisions of the IRGC and its militia arm, the Basij. Benefiting from hefty budgets, these state actors monitor social media platforms and often orchestrate “raids” leading to the arrest of people criticizing the clerical establishment and security agencies or those “flouting morals and religious values.” Beyond the state, queer individuals in Iran rely on online anonymity to evade hate crime, which in many cases, although sanctioned by the state, is perpetrated by their relatives.

A case in point is the horrendous murder of twenty-year-old Alireza Fazeli Monfared in May 2021. A queer member of Iran’s Arab ethnic minority, Alireza was decapitated and murdered by their relatives over their queer identity. This heinous crime was first revealed during a conversation on Twitter and later verified by activists. If it wasn’t for the Internet, the crime would have gone unreported or at least underreported.

The bill also aims to criminalize the development, reproduction, and distribution of the ubiquitous methods Iranians use to circumvent censorship (VPNs and proxy software). A clause in the bill makes the use of these tools punishable by up to two years in jail. Since the Internet is strictly censored in Iran, people heavily rely on these tools for accessing the most basic services, including secure online communication tools, video sharing platforms like YouTube, and dating apps.

By creating a new criminal offense, which is likely to entail phone searches and online surveillance, the bill will expose the LGBTQI community to higher risk of persecution.

Over the past couple of years, confiscation of electronic devices and unwarranted laptop and phone searches have become the norm for Iranian security forces, even when arresting women for “disregarding hijab rules.” The criminalization of VPNs would provide officers with additional legal justification to conduct such searches that have been known to create double or layered legal consequences and charges for communities such as LGBTQI people.

VPN criminalization is also widely known to be a part of a wider policy of a multi-tiered system of Internet access. The creation of “legal VPNs” has long been discussed by top officials such as President Ebrahim Raisi. The policy would mean users are ranked based on their profession and proximity to centers of power and given different levels of access to the Internet.

Marginalized groups are certain to take the brunt of such policies. Iran is a society where people not conforming to heteronormative social constructs are shunned and systematically deprived of basic human rights, including the right to work. Those openly associated with the LGBTQI community will be left deprived of a layered-access system to the Internet. If they are included in such a system, their exposure or “outing” will surely be guaranteed under these new intensified surveillance conditions.

Nightmare in the making; high time to act

Depending on the Islamic Republic’s technical capabilities and its resolve to implement the bill in full, the ratification of the Protection Bill could deal a fatal blow to online freedoms in Iran. The manner in which the queer community will have to retreat from its safe online spaces is a genuine cause for alarm for a community that will suffer through more persecution and isolation.

Civil society inside and outside Iran has done a lot of work to raise awareness about the bill and the ramifications of its ratification. Now the international community must act against the bill. While the queer community inside Iran has grown exponentially over the past few years, foreign-based outlets, NGOs, and human rights organizations have yet to catch up with their progress and pace properly. There is also room for further documentation, consultation, and devotion of resources to the community inside Iran as well as in the diaspora.

Additionally, those working on Iran from outside the country should perceive and acknowledge the layered persecution marginalized and at-risk groups face in such hostile environments. This understanding, which can only be acquired by direct and consistent engagement with the communities inside Iran, can and should lead to better advocacy and robust safety and security responses to avoid harm to these at-risk communities.

Iran’s LGBTQI community presents a heavily surveilled, censored, at-risk, and often internationally isolated population. Despite all these, ARTICLE19’s Rigot says, “The community’s ingenuity in navigating internet controls, repressive laws, and anti-queer policing, has been fine-tuned due to necessity.”

All these capabilities will be eroded overnight if the Islamic Republic goes ahead with its draconian plans for the Internet.

NOTE: This blog post was written as part of ARTICLE19’s Tightening the Net series on Iran.

Iran: Tightening the Net 2020 (Social Media Organization Bill, the initial version of the Protection Bill, was mentioned and analyzed in TTN 2020)

Iran: Parliament’s “Protection Bill” will hand over complete control of the Internet to authorities 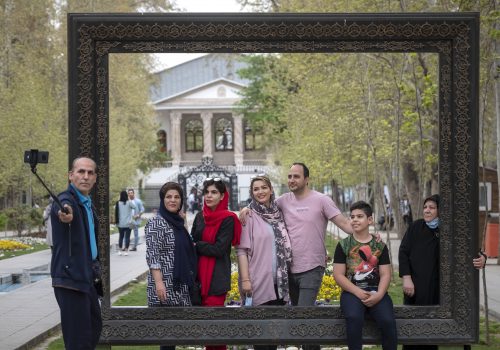 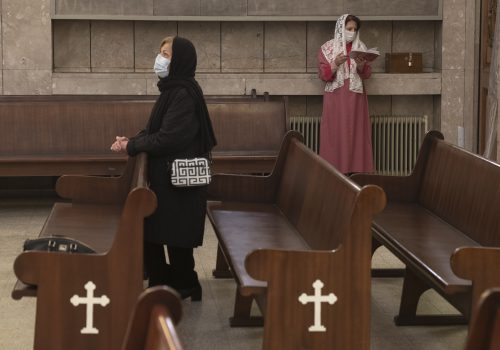 In practice, Iran’s discriminatory law affects almost all aspects of minority children’s lives, such as safety and well-being and access to health and education. 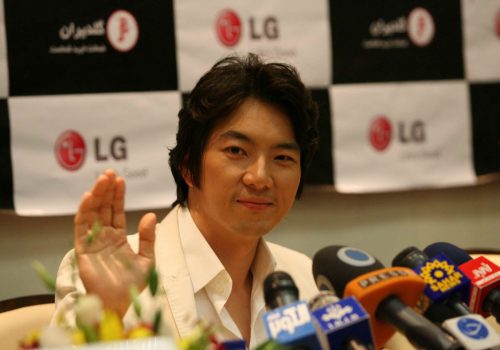 Image: An Iranian young woman uses her smartphone while sitting in a park in northern Tehran during the day of Sizdah Bedar, also known as Nature's Day, on April 2, 2022. Sizdah Bedar also known as Nature's Day is an Iranian festival held annually on the thirteenth day of Farvardin (the first month of the Iranian calendar) which people spend time outdoors and mark the end of the Nowruz holidays in Iran. Iranian Government allowed people to go out of their houses and attend outdoor places two years after the new Coronavirus disease (COVID-19) outbreak in Iran. (Photo by Morteza Nikoubazl/NurPhoto)NO USE FRANCE