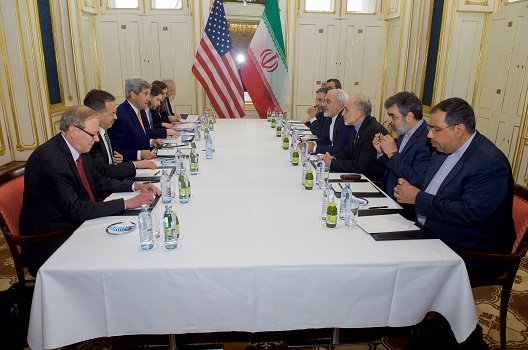 The Islamic Republic of Iran has relied on enmity with the United States for its own legitimacy throughout its existence, using it – and the threat of US allies such as Israel and the Persian Gulf littoral sheikdoms — to excuse violence against its own citizens and intervention in regional conflicts. Similarly, the US government and its allies have used Iran as a bogeyman to justify the large US military presence in the area, and huge military spending by its allies.

This is a win-win situation for politicians and arms merchants; and a lose-lose situation for ordinary people, particularly Iranians, and all peace lovers who would rather see their resources spent on economic development.

Given the deteriorating reality of social, economic, and political life in their country, Iranians would generally hope to see a metamorphosis of their government but not another bloody revolution. They are acutely aware of the unfulfilled promises of the last 40 years by all factions of the regime and are not looking for another round of empty promises and heartbreaks. Iranians want a modern, healthy, energetic, forward looking and forward moving government that does not substitute slogans for a real plan of action.

The United States, on the other hand, cannot seem to learn from history. In general, Iranians, unlike their government, sentimentally have been pro-American. Yet, they have been shunned by the Trump administration, through the imposition of an unjust travel ban and now resumed sanctions, and to a lesser extent, even by the Obama administration, which allowed restrictions on US visas for foreigners who had visited Iran. “Extreme vetting” by both administrations has been a burden on Iranians and their relatives in the United States. The Iranian government has exploited these issues to whitewash social, economic and political failures caused by its own mismanagement and corruption.

The antagonistic attitude of the IRI toward the US and the deep disdain of the American political establishment towards the IRI provide a great opportunity for creative diplomacy. However, neither side seems willing to let go of old and tired prejudices and alliances, which could lead to a bloody confrontation without mutual benefit.

Iranian-Americans, who pointedly did not figure prominently at Secretary of State Mike Pompeo’s recent address in alleged support of Iranian “voices,” stand largely at arms length from US policies because of Trump’s unilateral abandonment of the Joint Comprehensive Plan of Action (JCPOA), re-instated economic sanctions and the travel and immigration ban.

Trump, who unexpectedly offered recently to meet with Iran’s president without preconditions, is making the same mistake that former President Jimmy Carter did by assuming that the president of Iran could deliver a deal with him on behalf of the entire regime. Trump may have poisoned the well so much that even Supreme Leader Ayatollah Ali Khamenei, who is the final decision-maker, has become incapable of negotiating with the US.

At the same time, Iran is an orphan within the US political establishment. It is similar to a piñata for US politicians, regardless of their party affiliations. Even Iranian-American expatriates are reluctant to openly advocate a pro-Iran position because of the poisonous US political environment as well as the unfortunate policies and attitudes of IRI leaders.

Trump’s demands from Iran have been enumerated in an infamous list of 12 conditions required for Iran to meet to earn a respite from sanctions. These demands basically require Iran to give up its sovereignty by allowing the International Atomic Energy Agency unfettered access to the country’s military sites when, where, and as many times as the inspectors deem necessary. The demands also include giving up uranium enrichment as well as ballistic missile development, which means depending on others for defense and know-how for the foreseeable future. Regionally, it requires Iran to pull back from every corner of the Middle East, from Yemen, Syria, Lebanon, and Iraq and to hope for the best. Also, for good measure, Iran must promise and declare a “good neighbor policy” toward Afghanistan, Saudi Arabia, the United Arab Emirates, Bahrain, Kuwait, Iraq, and Israel. Finally, Iran must cut off its long cyber tentacles that might reach the US.

In analyzing US-Iran relations, some have noted a similarity with North Korea but there are many and marked differences between Iran and the isolated north Asian state. First, the Iranian regime, while authoritarian, is not a one-man show. Although Khamenei might have the last word, political currents and counter-currents in Iran are vibrant and obvious for those with their eyes open and the desire to see.

Secondly, the US alliance against Iran is limited to the Persian Gulf littoral states and Israel. Pompeo’s call for “every nation, every nation who is sick and tired of the Islamic Republic’s destructive behavior, to join our pressure campaign,” has fallen mostly on deaf ears, if not producing outright ridicule. However, almost all nations are on the same side against North Korea and want to see it give up its nuclear weapons. Iran, on the other hand, has no nuclear weapons and accepted stringent curbs on its ability to produce them in the next 15 years.

So far, the Trump pronouncements – including a tweet that threatened Iran with total destruction — seem to have pushed Rouhani into a harder-line camp. He is now sounding like Khamenei and dismissing negotiations with the US as a “waste of time.” Whether or not this attitude is strategic or a stalling tactic is not clear. This could be a way of buying time to suppress and further marginalize those who have been vocally protesting against the regime, specifically those who have been sticking their necks out against Khamenei. There is also the danger that Iran will respond to US provocations by withdrawing from the JCPOA and the nuclear Non-proliferation Treaty and actually seeking nuclear weapons.

Both Iranians and Americans are mistaken in seeking some sort of Messiah to transform the social, economic, and political ills of Iran. At this juncture, peace and prosperity for Iranian citizens and a lucrative free market for the rest of the world, look unlikely to materialize in the near future, if ever.

Hamid Zangeneh is a former professor of economics. His areas of specialization are macroeconomics, money and banking, and international economics. His writings are published in English and Persian in both the US and Iran.

Image: Then US Secretary of State John Kerry, Iranian Foreign Minister Javad Zarif, and their respective advisers sit across from one another on January 16, 2016, at the Palais Coburg Hotel in Vienna, Austria, before a meeting about the implementation of the Joint Comprehensive Plan of Action outlining the shape of Iran's nuclear program. [State Department Photo/Public Domain]