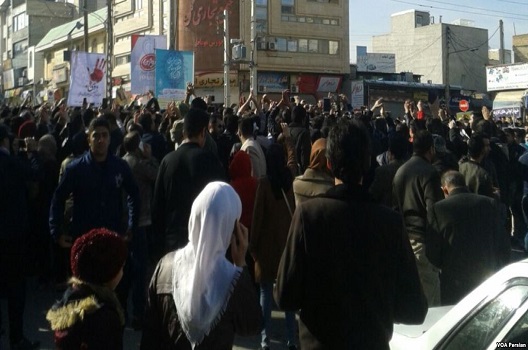 The protests that spread across Iran in late December and early January turned a lot of people into Iran “experts.”

Iranian expatriates ranging from physiotherapists to rocket scientists offered analyses on Twitter, alongside non-Iranians with an interest in the political dynamics of the country. A majority asserted that the protests were the precursors to the final days of the Islamic Republic. Now, that the dust has settled, it is perhaps easier to gauge what happened and what should come next.

There are numerous reasons for the protests, starting with inter-factional fighting. A powerful cleric in Mashhad, Alam al-Hoda, still wounded by the loss of his son-in-law, Ebrahim Raisi, in presidential elections last year, used his local fan base to attack President Hassan Rouhani. The initial protests were like lighting a cigar in a room filled with gas and caused an explosion. People fed up with chronic economic problems found a venue to sound their opposition. The slogans being chanted soon morphed from anti-Rouhani to anti-establishment and spread to provincial towns and cities around the country.

The underlying causes for discontent are clear. Iran has been suffering from the diseases of nepotism, gerontocracy, corruption and other forms of mismanagement. By appointing ministers, directors and other high-ranking officials based on their allegiance to the system, family relations and religious credentials rather than experience and expertise, sector after sector has become infected and hasn’t been functioning very well. There is also a tendency to overemphasize local over national priorities. Thus if someone from Isfahan gets a high-ranking post, he would strive only to get benefits for his home town and prevent anything good from going to rivals such as Mashhad, Tabriz and Shiraz.

Meanwhile, ordinary Iranians have contended for decades with unemployment, inflation and corruption.

With the price of oil still low and funds going to unaccountable religious foundations and on-going intervention in Syria, the government needs to generate additional revenues. Instead of reforming its economic management, however, it has sought to reach into the pockets of those already under pressure by increasing the price of gasoline and reducing the recipients of monthly cash subsidies.

Everyone who lives in Iran knows that the tax system is not functioning properly and doesn’t generate the revenue the government needs. The only people who pay their taxes fully are government employees.

Organizations connected with the clergy receive vast amounts of money but never report how they spend it. While clerics live in comfort, factory workers in dozens of cities are owed back pay and their livelihoods challenged by imports by well-connected people. Put this alongside news of mass embezzlements and other corruption scandals that have afflicted the banking sector, social welfare fund and retirement schemes and it is easy to understand the depth of popular discontent. One example is an Oil Ministry employee who had been misusing funds for more than eight years and was reported to have fled to Canada with $22 million in public funds.

Another example of mismanagement that affects the pocketbooks of ordinary is the automotive industry. The government charges high tariffs for imported cars, ostensibly to support domestic production. This forces Iranians to pay the same amount for an outdated and inefficient vehicle made at home instead of a high-quality, fuel-efficient and safer car from abroad. At the same time, the government is asking Iranians to pay higher prices for gasoline.

Despite the slogans chanted in favor of changing the Islamic Republic to an “Iranian” republic, most Iranians prefer the current system to anarchy, civil war and foreign interference. The people of Iran have seen what has happened in countries such as Syria and Libya and don’t want to see Iran turned into ruins. At the same time, the system needs to reform and to stop blaming outsiders for its own shortcomings.

Although a blame game is currently going on in the country, the sound of the protestors has been heard and some actions are being taken.

The system should try harder to remove pressure on the people by easing restrictions on social liberties such as the bans on women performing solo concerts and interference with social media.

The government should also give youth a chance to help govern the country and deal with major challenges, including environmental degradation and the likely demise of the Iran nuclear deal. Iran has well-educated young people who could contribute much more if given the opportunity. Get rid of the same set of ministers and deputies who have been running the country for the last forty years. Don’t use social media as a scapegoat, reform and you can stay.