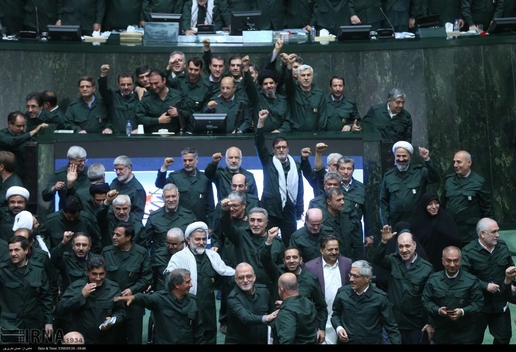 The recent White House designation of Iran’s Islamic Revolutionary Guard Corps (IRGC) as a foreign terrorist group is the latest extension of the Trump administration’s “maximum pressure” policy toward Iran. Yet this policy, aimed at containing Iran’s regional role and limiting its advanced missile program, has backfired, strengthening the status of the IRGC in Iranian domestic politics and further legitimizing its regional and missile activities in the view of many Iranians.The result is the opposite of the Trump administration’s announced goal in withdrawing in May 2018 from the Joint Comprehensive Plan of Action (JCPOA), to reach a “better” nuclear deal. Re-imposed draconian sanctions were meant to challenge the value of the country’s regional policy in domestic politics, weaken Iran’s deterrence strength and push Tehran to accept political and security trends favored by President Donald Trump and his regional allies—Israel, Saudi Arabia and the United Arab Emirates.

The sanctions are designed to weaken Iran’s economy, exacerbating domestic splits and promoting fragility in Iran’s political system. While sanctions have sharpened a critical debate in Iran’s domestic politics about its regional presence, they have not resulted in any policy changes. Indeed, there is a correlation between increased national power and deterrence strength in the regional balance of power.

Iran’s defensive deterrence is based on two foundations.

First, relying on “massive missile fire” to respond to attacks by hostile states and targeting their military bases in the region that could be used to hit Iran. In this respect, the extension of economic sanctions has not limited Iran’s missile program as the main source of the country’s deterrence. In fact, sanctions make national missile production more attractive from an economic standpoint than buying foreign advanced fighter jets. Missiles are fast, precise and hit their targets effectively. Their mobility makes them less vulnerable to air defenses. Accordingly, an advanced missile strategy is institutionalized in Iran’s defense policy.

Second, Iran relies on its strategic depth through benefiting from territorial connectivity with the region and local networks with friendly political forces. Iran uses financial and military support as well cultural-societal commonalities to strengthen regional partners, consolidate their status and institutionalize their political positions at the local and national levels. Iran’s logic of supporting an “axis of resistance” is based on strengthening Iranian deterrence power through this territorial attachment. Despite—and in some ways because of—the efforts made by rival states, Iran cannot afford to retreat from its current regional positions and partnerships.

In this regard, the IRGC is the main force responsible for confronting national security threats to the “state” of Iran. This massive force, experienced in symmetric and asymmetric conflicts, is in charge of tackling challenges from across Iran’s fragile borders in Kurdistan and Sistan and Baluchistan provinces, the Persian Gulf, and the Strait of Hormuz. The force is also responsible for securing and preempting any possible emergence of anti-Iran political-security trends and forces in the region.

Interestingly, there is a critical debate in Iran about whether the IRGC’s role in defeating the Islamic State of Iraq and al-Sham (ISIS) in Iraq and Syria will ultimately be detrimental to Iran’s national security. Because it reduced the direct dangers to hostile states such as Israel and the US, Iran may have inadvertently made it easier for them to use their forces to attack Iran. On the other hand, the IRGC’s offensive strategy in dealing with anti-Iran forces is the natural duty of the force to preserve Tehran’s geopolitical interests and thus based on Iran’s long-term strategic calculus.

The IRGC’s prompt decision to confront ISIS in 2014 prevented the fall of Baghdad and Erbil, which would have toppled governments friendly to Iran and handed Iraq over to the terrorist forces. This power vacuum condition would have resulted in a “failed state” situation, as was the case in Afghanistan during the Taliban era, that undoubtedly could have opened a new front-line and a potential space for hostile states to put pressure on Iran. Beyond preserving national interests, the IRGC strategy shows Iran’s determination to confront terrorist groups that are a direct danger to global security. As Iranian Foreign Minister Mohammad Javad Zarif has tweeted, “ISIS would have held two Arab capitals and fielded a terrorist army on Europe’s doorstep, had IRGC not fought alongside brave peoples of Iraq and Syria.”

Trump’s withdrawal from the JCPOA and imposing maximum sanctions on Iran that has now gained a new dimension by designating the IRGC as a terrorist group—together with Europe’s inability to effectively confront this policy—has brought massive frustration to Iranians who fear that the West’s and its regional allies’ fundamental goal is to weaken Iran’s national power from the inside.

This development is a turning point in changing the perspective of Iran’s public and intellectual circles towards the significance of national security issues and the necessity of enhancing the country’s deterrence strength, consequently legitimizing Iran’s regional policies and missile program. At present, any possibility of talks or negotiations on Iran’s missile program is considered a red line to national security and an element of weakening the power of the “state” of Iran.

The White House action has also led to more solidarity within Iran’s political spectrum, whether reformists or conservatives. In a symbolic move, members of Iran’s majority moderate parliament turned out in the dark green uniforms of the IRGC the day after the US designation in a sign of comprehensive support. This wave has been increasing and extends to the media, university students, intellectual circles, and even some opposition forces abroad. The logic of this support is clear: The IRGC is being perceived as the main custodian of Iran’s national security.

Indisputably, designating the IRGC as a terrorist group will impose further economic hardships on the Iranian people in terms of depressing oil exports, devaluing the currency, and frightening away foreign companies and investment. Yet this simultaneously leads Iranians to the conclusion that resistance against US policy will secure their country from a bigger ongoing security threat of internal destabilization and even dismemberment. In effect, the US policy has narrowed the scope for debate within Iran and forced all factions to focus on the state’s survival.

Kayhan Barzegar is the director of the Center for Middle East Strategic Studies in Tehran. He is also an associate professor of international relations at the science and research branch of the Islamic Azad University. Follow him on Twitter: @kbarzeg.