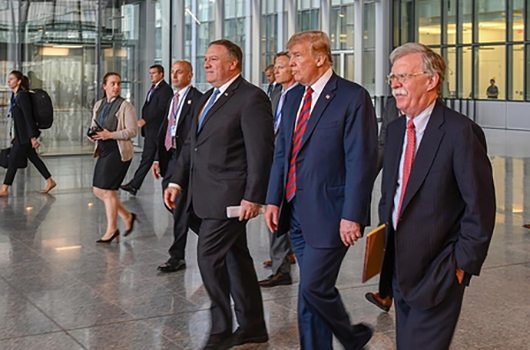 US President Donald Trump has always advocated talking to Iran. As early as 2011, the business mogul claimed to be open to talking to then hardline President Mahmoud Ahmadinejad. Even so, Trump never trusted President Barack Obama’s ability to negotiate with Iran. Trump would later call the 2015 multilateral nuclear agreement reached under the Obama administration a “bad” and “disastrous” deal.

As a 2016 presidential candidate, Trump campaigned on making a “better deal.” His suggested approach: “double up and triple up the sanctions and have them come to us.” As president, the Trump administration has carried out this policy but has not achieved a new agreement, a reduction in Iran’s regional footprint or even a coherent negotiating process.

Trump waited until his second year as president to formally withdraw from the Joint Comprehensive Plan of Action (JCPOA). He did so after reshuffling his cabinet to eliminate JCPOA supporters and appointing Iran hawks John Bolton and Mike Pompeo as national security adviser and Secretary of State respectively. Bolton was one of the architects of the 2003 Iraq War and a long-time proponent of regime change in Iran. The blueprint for US withdrawal from the JCPOA on May 8, 2018 was based on a Bolton “Iran nonpaper,” which listed ways the US could pressure Tehran.

Shortly afterwards, on May 21, 2018, Pompeo announced a list of twelve demands supposedly intended to make Iran act like a “normal country.” It included curbing Iran’s regional interventions, ending uranium enrichment and stopping ballistic missile development. Known as the maximum pressure policy, the list seemed to be partly inspired by Peter Schweizer’s book, Victory: The Reagan Administration’s Secret Strategy that Hastened the Collapse of the Soviet Union. The demands—to which improving Iran’s dismal human rights record was added in October 2018—were so broad as to be unrealistic and instead appeared to be a thinly veiled push for regime change.

Despite Iran’s continued compliance with the JCPOA, the Trump administration began in August 2018 to re-impose all the sanctions suspended by the deal. It then went further, designating the Islamic Revolutionary Guard Corps (IRGC) as a foreign terrorist organization against the advice of the US intelligence community that this would put American forces in the Middle East at risk. The biggest blow came on May 2, 2019 when the US cancelled waivers to a handful of nations purchasing Iranian oil and sought to impose a total embargo on the export of Iranian crude.

Despite claims that these extreme measures were intended to push Iran into new negotiations, some administration officials clearly hoped that they would, in the parlance of Pompeo, cause an “economic collapse” or “lead the Iranian people to rise up and change the behavior of the regime.” That is, until Trump undercut Iran hawks in his own administration and re-iterated that he was open to talking to Tehran—regardless of its actions—and offered to sit down with “no preconditions.”

The mixed messages have been perplexing to say the least. And the result has escalated tensions in the Persian Gulf region.

The US goal of zero Iranian oil exports—which Iran calls economic warfare—prompted threats from Iran that it would deprive the rest of the world to access to the strategic Strait of Hormuz, through which 20 percent of the world’s oil passes. Since May, Iran has followed through on these threats by sabotaging a half dozen oil tankers and seizing several others—including a Panamanian-flagged vessel (that Iran claims was smuggling) and a British-flagged vessel in retaliation for the British seizure of an Iranian oil tanker off the coast of Gibraltar on July 4.

Similarly, when it comes to Iran’s proxy groups, there has been no sign that they are losing their relevance for Tehran. During a prior period of heavy sanctions from 2011–2016, Iran not only propped up the Bashar al-Assad regime in Syria, it fought the Islamic State of Iraq and al-Sham (ISIS) in both Syria and Iraq, and armed Houthi rebels in Yemen. As veteran Congressional Research Service Iran analyst Kenneth Katzman notes, “events and trends demonstrated just the opposite or, at best, suggest that sanctions and Iran’s regional influence are independent of each other.”

Today, the IRGC maintains a presence in Syria, while Iran-backed Houthi rebels continue to push back against a Saudi-led coalition. Though some articles point to Hezbollah’s financial cutbacks, there is no evidence of it losing clout in Lebanon or abandoning its presence in Syria. As the New York Times recently explained, “recent history suggests that financial pressure on Iran does not necessarily lead to military cutbacks.”

In terms of non-proliferation, withdrawal from the JCPOA has also backfired. Sanctions have reduced incentives for Iran to stay within the boundaries of the accord. Iran has gone above limits for the amount and potency of enriched uranium and threatened other steps, citing article 26 of the JCPOA under which Iran has the right to “cease performing its commitments under this JCPOA in whole or in part,” if sanctions are re-imposed.

While sanctions have had a devastating effect on many ordinary Iranians, they have not caused the Iranian economy to collapse. The national currency, the rial, has lost about 70 percent of its worth since May 2018. The International Monetary Fund reports that the Iranian economy will contract 6 percent this year, but that is a recession not a Venezuela-scale catastrophe. With reforms and better economic planning and diversification, Iran can likely survive with exports of about 720,000 barrels of oil a day, worth $17 billion a year.

On the domestic front, meanwhile, hardliners that vehemently opposed the JPCOA and warned against trusting the US are feeling vindicated. Some hardliners have continued to pressure and blame President Hassan Rouhani, going so far as attempting to impeach Foreign Minister Mohammad Javad Zarif, the lead nuclear negotiator, in November 2018. Though there are differences between factions about how to confront the United States, the heavy US pressure on Tehran in recent months has led to a rally-around-the-flag effect as Iranians push back against what many view as a Western imperialism.

So if the Trump administration’s goal has been to change Iran’s “malign behavior,” it hasn’t succeeded. The “maximum pressure” policy has instead caused Tehran to lash out.

Image: US Secretary of State Michael Pompeo participates in a press conference with US President Donald Trump and National Security Advisor John Bolton during the NATO Foreign Ministerial on July 12, 2018. (State Department)