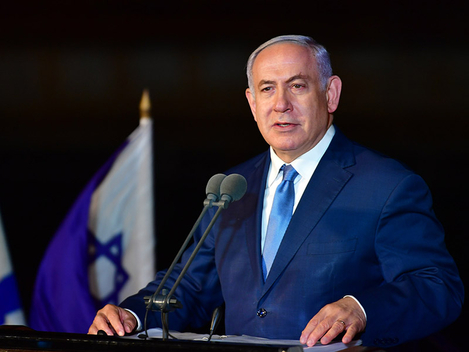 The Israeli elections are well underway and the Iranian issue is taking a central part in Prime Minister Benjamin Netanyahu’s electoral campaign. Putting Iran on the agenda helps the prime minister maintain a never-ending security tension. Thus, the 2015 Iran nuclear agreement, also known as the Joint Comprehensive Plan of Action (JCPOA), has become a regular feature in Netanyahu’s speeches against his political rivals.

Moreover, Netanyahu’s role as defense minister also promotes his security agenda while he makes regular appearances at military bases as part of his electoral campaign. Netanyahu’s March 6 speech at the graduation ceremony of the Haifa naval cadets, contrary to what Hebrew language press reported, was not without controversy.

Although Israeli media covered the event on the same evening, two elements slipped under the radar. One—which related directly to Iran’s nuclear issue—was completely absent from the official Hebrew and English transcripts issued by the Prime Minister’s Office. As a result, the subject was completely absent from the international media coverage and therefore not seen by international observers.

The first issue in Netanyahu’s naval ceremony speech was widely covered and quoted around the world. Netanyahu unexpectedly set the Israeli navy a task that, to date, has not been announced: to participate in the enforcement of unilateral sanctions regime by preventing Iranian oil trading in the Persian Gulf. According to Netanyahu, Iran is bypassing US sanctions by covert oil smuggling and that the international community, including Israel, should work to stop this sanctions violation.

Netanyahu’s statement is problematic and raises a number of questions. First, it’s unclear how the Israeli navy could enforce sanctions in the Persian Gulf, when according to its traditional doctrine, its role is to operate in the Mediterranean. Second, it’s not certain that the US navy could give its blessing to a joint operation. Third, it’s also unclear whether Netanyahu’s declaration is based on an orderly decision-making process or if it received backing from the security cabinet and the chief of staff. Fourth, were the implications of international law examined? Enforcement of sanctions through searches and boarding foreign merchant vessels in international waters without permission is a violation of the Convention on High Seas. Finally, it’s unclear if the implications were weighed of an action that is likely to be interpreted as a naval blockade and a declaration of war against Iran. This is an especially sensitive issue for Israel that set out to war in 1967 using casus belli of the closing of the Straits of Tiranand international sea lanes for its commercial fleet.

Within days of Netanyahu’s declaration, the Iranian Defense Minister Amir Hatami reacted to the Israeli navy’s new mission and declared that Tehran would protect its shipping lanes and that it had the means to give a “crushing response.”

This saber-rattling exchange between Israel and Iran is not without danger. An intense public exchange that includes threats and military offensive scenarios can lead to war through miscalculation. A misunderstanding is likely to push the other side into a preventative war. Neither Iran nor Israel has a monopoly on threatening declarations—which are often made for internal consumption—and in turn could lead to local tactical confrontations that can easily deteriorate into a strategic complication.

During his speech, Netanyahu also raised a second issue which was removed from the Prime Ministers Office’s official publications.

At the naval cadets ceremony, the prime minister referred directly to the Iranian nuclear threat and said in an unambiguous tone that “thanks to the navy above and below the sea—those who aspire to annihilate us will not succeed and will put themselves in terrible danger.” This was not reported in the international press, but only reported in the Hebrew press. Paradoxically, and in spite of the stern tone, this line did not receive particular attention in Israel. It was treated as if deterrence strategy messages are simply something that should be repeated at every opportunity.

Declarations about strategic deterrence in the Iranian context are central for Netanyahu. For example, at the name unveiling ceremony of the Dimona Nuclear Research Center in honor of Shimon Peres during August 2018, Netanyahu declared that “those who threaten to wipe us out put themselves in a similar danger.” Nevertheless, the prime minister was careful not to repeat this declaratory threat in the context of submarines.

The last time Netanyahu did this was during the 2016 ceremony for the new Rahav submarine purchased from Germany. On this occasion, Netanyahu referred in the most detailed and concrete manner to the special deterrent and striking role of the submarine fleet in distant and global quarters against “the enemies who want to destroy us,” adding that they “need to know that Israel is capable of striking in a very great strength at all those who would harm it.”

Since then, there has been silence regarding deterrence threats relating to submarines. Was this just a slip of the tongue that led Netanyahu last week to again repeat the threatening formulation in the context of submarines? Perhaps he was seeking to impress Israeli public opinion during the election campaign with an important strategic achievement. Or, Netanyahu may have been trying to justify his strategic achievements regarding the purchase of the German submarines now that Israelis connect it to his corruption scandals and police investigations.

So what led to the removal from the official English transcripts of the “deterrent threat” at the naval cadets speech? It’s possible that after Netanyahu gained political points, a small group of Israeli officials who work on nuclear issues—such as the military intelligence and Atomic Energy Commission—felt the need to keep a low profile on the subject.

Declarations in the realm of strategic deterrence are sensitive and should be used in a careful and measured way. Belligerent rhetoric relating to the strategic issue is not part of the discourse in the club of democratic countries to which Israel wants to belong. Furthermore, these declarations cannot be seen as a response to a concrete threat.

There’s also a possibility that some Israeli officials reminded Netanyahu that intelligence reports and IAEA monitoring reports estimate Iran does not have nuclear weapons and is abiding by the JCPOA.

Shemuel Meir is a strategic blogger for Ha’aretz focusing mainly on nuclear issues, Iran, and a Middle East Nuclear Free Zone. He is a former IDF analyst and Tel Aviv University researcher. Follow him on Twitter: @ShemuelMeir.