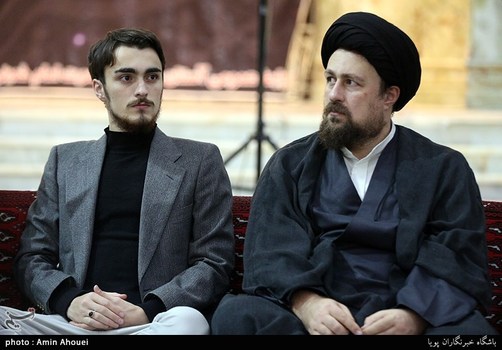 “Your smile smells of someone who stays, so stay! Make me a poet again, make me fall in endless love.” These cheesy lines are from a Persian language Instagram post on May 25 by Fatemeh Daneshpajooh dedicated to the 21st birthday of her husband, Ahmad.

They could be any ordinary couple, but the husband’s last name gives it away. Ahmad Khomeini is a great-grandson of Ayatollah Ruhollah Khomeini, the founder of the Islamic Republic.

Khomeini’s last name, words and images permeate today’s Iran. His successor, the current Supreme Leader Ayatollah Ali Khamenei, cannot escape Khomeini’s shadow because he lacks the founder’s charisma and high-ranking clerical status. There is something else about the late ayatollah that is a thorn in Khamenei’s side: three decades after Khomeini’s death on June 4, almost none of his surviving clan support Khamenei. Of those who are active in politics, almost all prefer the reformist faction.

In 1933, almost nine decades before Fatemeh’s Instagram post, Khomeini was a young newlywed missing his wife while on a pilgrimage trip to Mecca. From Beirut, the cleric wrote her a letter: “Your beautiful face is etched on my heart. I am now in the beautiful city of Beirut and I truly miss you. The sight of the city and the ocean are so pleasant. Alas that my lovely darling is not with me.”

By all accounts, Khomeini had an amicable marriage to Khadijeh Saqafi, the daughter of a wealthy merchant. Though she never had a public profile, Saqafi was the subject of many rumors until she passed away in 2009 at the age of 93.

Together, Khomeini and Saqafi had five children—two sons and three daughters—all born in Qom, where Khomeini lived before he was exiled by Shah Mohammad Reza Pahlavi in 1964. The eldest son, Mostafa, died a suspicious death in Iraq in 1977, before he could see his father found the Islamic Republic in 1979.

Khomeini’s other son, Ahmed, was a key player in the early years of the revolution and his father’s closest aide in the last decade of his life. When Khomeini passed away in 1989, Ahmed also played a role in Khamenei’s rise.

In 1990, Ahmed went on the record as saying: “We are obliged to stand behind the Supreme Leader, His Excellency Ayatollah Khamenei and listen to everything he says. To obey him is to obey Imam Khomeini.”

Having Ahmed as a key supporter was a relief because Khamenei knew the Khomeini clan could become lose cannons. In 1980, Khomeini had to rebuke his own grandson, Hossein, after he backed President Abolhassan Banisadr over his supporters. Banisadr was to lead the domestic opposition but was impeached shortly after by a parliament dominated by supporters of Khomeini.

In the early 2000s, Hossein Khomeini would go to the extremes of supporting the 2003 US invasion of Iraq and speaking at the Washington-based think tank, the American Enterprise Institute. During 2006, he called for the overthrow of the Islamic Republic in an interview from his home in Qom. Hossein has since been banned from interviews.

Once Ahmed passed away in 1995, Khamenei would never again get a glowing endorsement from a Khomeini. The heir apparent of the Khomeini name became Ahmed’s son, Hassan. In charge of Khomeini’s mausoleum complex near Tehran and the head of a massive institution which is financed by millions of dollars from the public sector, Hassan has something of a royal air to him. He is also hated by hardliners for his open endorsement of the reformists.

In 2016, Hassan was barred from running for a seat in the Assembly of Experts, a body tasked with supervising the Supreme Leader and picking his successor. His father-in-law’s candidacy was also blocked, as was the parliamentary candidacies of two other grandsons of Khomeini.

Zahra Mostafavi, Khomeini’s most politically active daughter who teaches Islamic philosophy at Tehran University, is not politically aligned with Khamenei, either. She endorsed the candidacies of reformist Mohammad Khatami in 1997, Green Movement leader Mir Hossein Mousavi in 2009, and pragmatist Hassan Rouhani in 2013.

The Khomeini clan have continued the venerable tradition of marrying into notable clerical families. Interestingly, this has created a nexus of influential households that are almost always on the reformist side of Iran’s official politics. A notable example is the 55-year-old Zahra Eshraqi, a granddaughter of Khomeini who is married to Mohammad-Reza Khatami, brother of the former president and a key reformist politician. Eshraqi has never agreed to run for office herself but ran the youth campaign for reformists in local and parliamentary elections in 2006, 2008 and 2013.

Many Khomeinis are also related to the family of Musa al-Sadr, the Iranian-Lebanese cleric whose offspring and relatives are invariably reformist supporters. Sadr’s nephew was a deputy foreign minister under Khatami and his daughter married Yasser Khomeini, another grandson of Khomeini who endorsed Mousavi in 2009.

Hardliners have a special hate for the Khomeini clan and often compare them to the story of Noah, the patriarch whose offspring became ungodly. This hate is shared by some stringent opponents of the regime who consider Khomeinis to be hypocritical, especially since some live in the West.

Another of Khomeini’s grandchildren offended all sides of the political spectrum when she sent her daughter, Nayima Taheri, to study in Canada because she claimed it was a more devout place for daily Islamic players. When Nayima won an award for her studies at McMaster University in 2013, she caused a controversy by wearing leggings that were deemed un-Islamic. Her mother made it worse by doctoring the photos to make her look more modest.

In January 2018, as Iran was burning in mass anti-regime protests, Nayima posted stories of her helicopter tour over southern California on her private Instagram account, noting with excitement that singer Justin Bieber was having a pool party.

Beyond the luxurious lifestyle of the Khomeinis which enrages hardliners and Iranians alike, questions remain as to their political influence three decades after the founder of the Islamic Republic’s death.

Hassan—the scion of the family—though able to keep his public profile, is effectively neutered. He is merely allowed to give an annual speech on the anniversary of Khomeini’s death, but barred from running for office. Despite this, Hassan is known to have long held dreams of succeeding Khamenei as the Supreme Leader and is likely to be a contender in the crowded field when the day comes.

Whether 21-year-old Ahmad, who wears Nike and Tommy Hilfiger, or any of the other Khomeini clan will ever launch a successful political career is anyone’s guess. But decades later, the Khomeini last name and the lives of its family members continue to be a spectacle for Iranians.

Arash Azizi is a New York-based writer and academic. He previously co-hosted a program on London-based Manoto TV, which was one of the most watched news shows in Iran, and was a former international editor of Kargozaran, an Iranian daily. He is currently a doctoral student at New York University, where he researches the history of the Middle East during the Cold War. Follow him on Twitter: @arash_tehran.