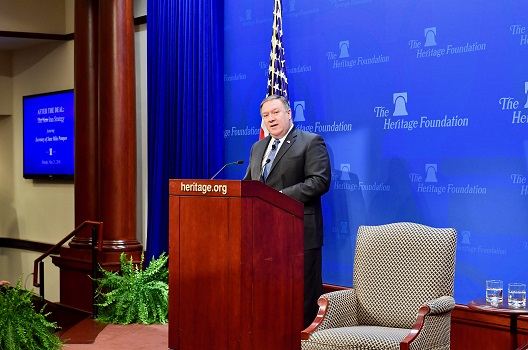 US Secretary of State Mike Pompeo used his first speech in his new position on May 21, 2018, to send a message to the Iranian leadership and people.

Pompeo asserted that these demands were broadly shared by Washington’s European allies. However, it is not clear that is the case.  In response to Pompeo’s speech, British Foreign Secretary Boris Johnson said that packaging all of Iran’s “worrisome conduct” into one agreement would be a daunting challenge. He added, “If you try to pull all of those into a giant negotiation, a new jumbo Iran negotiation, a new treaty, I don’t see that being very easy to achieve in anything like a reasonable timescale.  The idea of a jumbo Iran treaty is very difficult.”

Similarly, European Union foreign policy chief Federica Mogerhini cast doubt on the new US policy as an adequate replacement for the safeguards in the Joint Comprehensive Plan of Action (JCPOA).

“Secretary Pompeo’s speech has not demonstrated how walking away from the JCPOA has made or will make the region safer from the threat of nuclear proliferation or how it puts us in a better position to influence Iran’s conduct in areas outside the scope of the JCPOA,” she said. “There is no alternative to the JCPOA.”

Perhaps the most glaring flaw in Pompeo’s speech was that the conditions he laid out failed to add up to a clear strategy. His maximalist demands were divorced from reality and revealed ignorance about the political dynamics that govern post-revolutionary regimes such as those in Iran or Cuba in a post-colonial era. The demands also betrayed a profound lack of appreciation for Iranian nationalism. What Pompeo was asking for was complete capitulation and political submission that only conquering armies can demand of countries defeated in war.

No government with any national legitimacy would concede to such a list and the Trump administration knows well that the Iranian government would not be able to meet these requirements, save face, and maintain power. Thus the question is: What is the motivation behind the unilateral abrogation of the nuclear deal and this list of impossible demands?

The policy appears intended to achieve several objectives: First, intensify economic strangulation of the Islamic Republic in hopes of inducing an uprising that would topple the regime. Second, to reduce the financial assets of the regime and its ability to project power regionally.  Third, to provoke Iran to overreact and drag it into a military confrontation, thus ushering in regime change from without, which has long been the favored course of action of national security adviser John Bolton.

Let’s look at these objectives more closely. First, Iran has been under sanctions for the last 39 years and the regime has survived. In fact, the sanctions have strengthened the position of the Islamic Revolutionary Guard Corps (IRGC) in the economy. The IRGC is the main pillar of support for the regime.

Second, the spread of Iranian influence in the region is not tied to its financial assets. If that were the decisive factor, Saudi Arabia, which marshals much larger economic resources, would be the preeminent regional political power.

The expansion of Iran’s regional influence is primarily due to two factors. The first is a Shi’ite awakening and movement for empowerment among hitherto suppressed communities in countries such as Iraq and Lebanon, in part inspired by the example of the 1979 Iranian revolution. The second factor is the US toppling of Iran’s regional foes, in Afghanistan in 2001 and Iraq in 2003.

Iran’s regional policies are tied to its perception of threats and opportunities, not to its bank account. Iran’s intervention in Syria, for example, was motivated by a perceived need to preserve a long-time ally, the Assad regime, and to defeat Sunni Muslim fundamentalist militants linked to al-Qaeda and later the Islamic State.

Another reason why Pompeo’s demands are unrealistic is that they do not take into account Iranian nationalism. However much they may dislike the Islamic regime, Iranians do not welcome foreigners deciding the type of government they should have. Bitter memories of the 1953 CIA coup that overthrew a popular prime minister and restored an absolute monarch still linger. The death and destruction in Afghanistan and Iraq since 2001, under the guise of exporting democracy, have destroyed any illusions in Iran about the outcome of US military intervention and regime change. What government should rule in Iran is the prerogative of Iranian people, not right-wing Islamophobes such as Bolton and Pompeo.  What is more, the main victims of restored US sanctions will be very same Iranian people that the Trump administration purports to want to save.

Shutting the doors to diplomacy and escalating tensions with Iran while it was abiding by all the provisions of the nuclear deal reveals that these US hawks—in alliance with Israel and Saudi Arabia and their powerful lobbies in Washington—were all along intent on disarming Iran and ultimately, overthrowing its government.

Fearful of the impact of US secondary sanctions and expulsion from the larger US market, many European companies are winding down their operations in Iran. This will compel Iran to expand trade ties with China, Russia and India. The Iranian government will find other ways to work around the sanctions, meaning that the real casualty of Trump’s Iran policy will be US credibility.

Absent political legitimacy and soft power, what remains is brute force and military might. However, US military interventions in Afghanistan and Iraq reveal that the power to destroy is different from the power to control. Iran is a much larger country, with a population of 80 million and many more capabilities to deter foreign intervention. The advocates of regime change in Iran should look closely at the lessons of Iraq and Afghanistan and the high human, financial and political costs of choosing the wrong political course.

Manochehr Dorraj, PhD, is professor of International Affairs and Middle Eastern Studies at Texas Christian University.  A frequent commentator on global affairs and Middle East politics, he is the author and editor of six books, including From Zarathustra to Khomeini: Populism and Dissent in Iran,  and Iran Today: An Encyclopedia of Life in the Islamic Republic.

Mahmood Monshipouri, PhD, is professor and chair of the Department of International Relations at San Francisco State University.  He is also a visiting professor at the University of California, Berkeley.  He is editor of Inside the Islamic Republic: Social Change in the Post-Khomeini Iran, and Information Politics, Protests, and Human Rights in the Digital Age. He is also the author of Democratic Uprisings in the New Middle East: Youth, Technology, Human Rights, and US Foreign Policy.

Image: US Secretary of State Mike Pompeo delivers a speech, “After the Deal: A New Iran Strategy”, at the Heritage Foundation, in Washington, DC, on May 21, 2018. [State Department photo/ Public Domain]