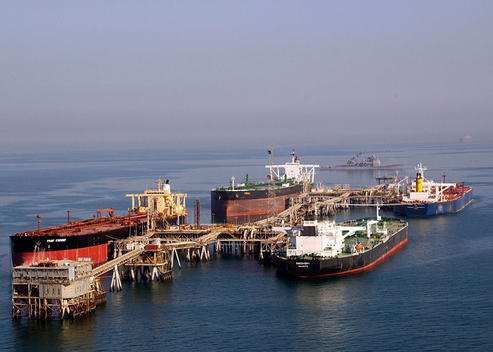 How many oil tankers laden with Saudi or Emirati oil need to be attacked around the Strait of Hormuz for the US to use force in the Gulf? That is not an American problem, according to US President Donald Trump. The world’s major geopolitical chokepoint for global oil supplies, that Arabian Gulf countries leveraged in pursuit of garnering American support, against Iran has now become irrelevant under the Trump administration. Iran’s security wildcard—closing the Strait of Hormuz—has become obsolete. Six tankers sabotaged around the strait and the markets didn’t even flinch, with crude oil benchmark prices continuing to decline over the two-month period of the attacks.

The Trump administration buck-passing Gulf oil security has sent shivers down the spines of leaders on both sides of the Gulf. By shifting security responsibility to Gulf oil exporters and Asian importers, Trump is overturning geopolitical axioms that for decades were taken for granted such as the vitality of the Strait of Hormuz as a global energy bottleneck and the importance of the stability in the Gulf region. Additionally, Trump is accelerating the restructuring of global oil markets by cementing the importance of American shale oil globally, and thus contributing to the volatility surrounding oil economies in the Gulf.

Around 21 million barrels of crude oil, condensates, and petroleum products pass through the strait daily—around 20 percent of globally traded oil—in addition 4.1 trillion cubic feet of liquefied natural gas (LNG)—a quarter of global supplies. It is shipped on thirty-five super tankers passing through the strait on a daily basis loading and delivering crude oil, LNG and oil products from Gulf exporting countries. The main destinations for around 80 percent of the oil and gas exports from all the Gulf countries passing through the strait is predominately Asia—specifically China, India, Japan, South Korea, and Singapore.

The Trump administration’s “maximum pressure” policy toward Iran is focused on the nuclear development of Iran, not Gulf oil security. President Trump has repeatedly stated that he is willing to go to war with Iran to prevent it from acquiring nuclear weapons. However, he left it open on whether he would authorize the use of force to ensure the security of oil in the Gulf. This signals Trump’s view that it is not a threat to the US—unless American interests or personnel are directly threatened—but rather an Asian and European problem.

For Trump, detaching Gulf oil security from Iran policy is a natural consequence of a realistic approach towards the regional geopolitics: it removes a trigger for having to go to war with Iran—a diplomatic wildcard that Tehran has threatened to play for decades—and it creates a headache for China. The US is also no longer reliant on oil originating from the Gulf, importing only around 900,000 barrels a day, around 9 percent of total US crude and petroleum products imports. Gulf oil security has lost its strategic importance for the US.

The sabotage of Saudi and Emirati oil tankers also opens the possibility of an equal chance of actions against—including sabotage—of super tankers laden with Iranian products. The British seizure of an Iranian crude tanker in Gibraltar on July 4, the resultant Iranian attempted reprisal, along with the continuing Iran-backed Houthi rebel attacks on oil tankers, pipelines, and facilities in Saudi Arabia and UAE, raise fears that Gulf oil security is rapidly unraveling.

Trump’s policy towards the evolving Gulf oil security crisis undermines all the stakeholders, including Iran and Saudi Arabia, the major two contenders across the Gulf and the region, because it subverts the basic understandings that have informed strategy-making by all the regional players. If we learned anything from the 1984 tanker war ensued between Iran and Iraq that affected Kuwaiti and international tankers and mired the US in a decade of Gulf water policing, it is that nobody can dominate Gulf oil security, but anyone can disrupt it, and everyone will suffer.

Even though the Trump administration is separating Gulf oil security from the nuclear policy towards Iran, the maximum pressure policy could mean maximum disruption by Tehran. It could engage in a self-defeating strategy of closing the Strait of Hormuz, even if it prevents Iran from exporting its own oil and further devastating the economy.

For Saudi Arabia, and other Gulf Cooperation Companies (GCC) countries, the risks compound exponentially. In the event of closing the strait, the export of crude and oil products for all Gulf nations will be blocked. This means a major loss of income—as most GCC economies depend on oil revenue for up to 80 percent of the national budget—and the continued set back to the recovery of GCC economies from the oil price crash of 2014. It also undermines the financial basis for reform and development of the Gulf rentier economies, such as the Saudi Vision 2030.

By un-pegging Gulf oil from American security assurance, the Trump administration is removing the underwriting of oil export prices from GCC countries, adding layers of transaction costs and risk premiums to the final export price, pushing Gulf countries to slash their export prices and trimming their margins to stay competitive.

The increased risk premiums for insuring tankers and declining of orders for transportation by major tanker operators—to and from the Gulf—will affect all Gulf exporting countries, as well as Far East importers. With the region accounting for about a third of all global seaborne petroleum shipments, the shipment rates out of the region have almost doubled over June after the sabotages, with tanker insurance rates increasing six-fold since the beginning of 2018.

Gulf oil insecurity—and Trump’s compartmentalization—is also cementing the rise of US shale oil exports and making it more competitive. The US is already exporting around 3.5 million barrels of oil, 5 million barrels of oil of natural gas liquids, petroleum products, and around 24 million metric tons per annum (MTA) of LNG—making the US the third largest LNG exporter after Qatar and Australia.

It is in the interest of all Gulf oil exporting countries—especially Saudi Arabia and Iran—to separate Gulf oil security from all political tensions and regional rivalry and to ensure security and freedom of navigation to all stakeholders. The alternative to ensuring this common good—as difficult and unpalatable it may seem especially to Arab Gulf countries—is further losses of oil margins and market share, economic and security instability in the short term, and assured irrelevance in terms of influence in oil markets in the long term.

Hadi Fathallah is director for Levant and Gulf Cooperation Council at NAMEA Group. He is also a fellow at the Cornell Institute for Public Affairs, and a Global Shaper, an initiative of the World Economic Forum. Follow him @Hadi_FAO.