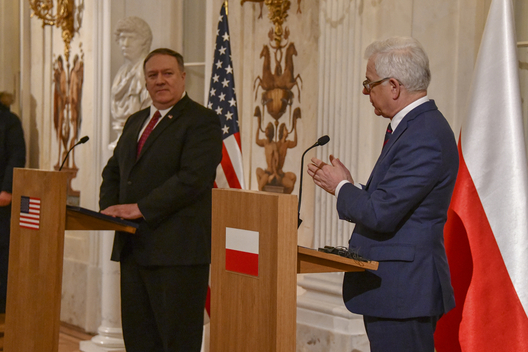 US Secretary of State Mike Pompeo participates in a joint conference with Polish Foreign Minister Jacek Czaputowicz in Warsaw February 12, 2019 (US Department of State)

The Trump administration’s policy of containing and weakening the Islamic Republic of Iran may appear to be going well to causal observers of Iranian affairs, and there is some evidence to support such a view.

The United States has withdrawn from the 2015 Iran nuclear agreement, also known as the Joint Comprehensive Plan of Action (JCPOA), that solely addressed the regime’s efforts to obtain nuclear weapons but failed to address its menacing actions towards neighboring countries, continued support of international terrorism, and ongoing efforts to develop ballistic missile technology. The JCPOA also completely failed to address the horrible human rights situation inside Iran itself.

The Trump administration has resumed economic sanctions against Iran, which are indeed weakening the Iranian economy and currency. State Department staffers have traveled the world to press upon allies the importance of implementing and broadening these sanctions until the Iranian economy is crippled and the regime comes back to the negotiation table for a broad and comprehensive deal that would address all outstanding issues. If the Iranian regime doesn’t come to the table, however, the administration doesn’t appear to mind a gradual collapse of the regime itself, or a soft regime change.

Secretary of State Mike Pompeo constantly talks about Iran’s support of terrorism, its dangerous adventurism in Yemen, Iraq, Afghanistan, and Syria, as well as the dire human rights situation in Iran. Pompeo even went as far as giving a well-publicized Iran policy speech in front of a large diaspora audience in July 2018 that included several members of Iran’s civil society, who now work from the US.

There are even some indications that Europe—Iran’s largest trade partner—is ready to resume additional sanctions on Iran after alleged Iranian efforts to bomb a gathering of an opposition group in France, and a foiled plot to assassinate an ethnic rights activist in Denmark.

Furthermore, French Foreign Minister Jean-Yves Le Drian recently stated that Paris was ready to impose sanctions unless the Iranians agreed to curb their ballistic missile program. Now the United States is organizing a summit in Warsaw on February 13-14 and Iran is scheduled to be the primary topic of discussion.

A long-awaited report from the US Army War College recently concluded that Iran was the only winner of the 2003 US invasion of Iraq.

The Islamic Revolutionary Guard Corps (IRGC) and Hezbollah continue to further entrench themselves in Syria, despite heavy bombardments by Israel. Meanwhile, President Donald Trump has declared that US forces are withdrawing from Syria.

The Saudis, despite help from the United States, have failed to defeat the Iran-backed Houthi rebels or bring an end to the Yemeni civil war. Indeed, according to a report by the United Nations Security Council, Tehran continues to finance the Houthis.

Iran’s oil continues to be purchased despite US sanctions. It doesn’t appear that the US will be able to lower Iran’s oil exports to zero, even after waivers expire, which was the stated aim of the Trump administration. The Iranian currency, which had crashed after the imposition of sanctions, has made a recovery and has been stable the past few months. In addition, the Europeans have announced that a Special Purpose Vehicle (SPV)—to circumvent unilateral sanctions—is ready.

US actions and declarations of support for human rights in Iran have also not paid off. The Iranian regime continues to execute more people per capita than any other country. According to Amnesty International, Iran accounts for half of the executions in the entire world. There is continued deterioration of the treatment of ethnic and religious minorities, homosexuals, and women. The US hasn’t even been able to win the freedom of the US citizens that have been arbitrarily detained in Iran.

US efforts to bring about a more democratic Iran haven’t borne any fruit, either. Any effort to reform the broken Islamic Republic system failed a long time ago, despite support from the Clinton administration and repeated efforts of the Obama administration to revive the so-called reformist camp.

The Trump administration hasn’t engaged in any serious attempt to topple the regime, though it never stated that was one of their objectives. The US government funds US-based groups that support civil society, free press, women’s rights, environmental awareness, and so forth, but it doesn’t fund Iranian opposition groups whose stated goal is the overthrow of the Islamic Republic.

The Trump administration, more than half way through its term, still hasn’t staffed major positions that will have great influence on Iran policy and efforts. The nomination of David Schenker, the candidate for the top Middle East position at the State Department, continues to languish in the Senate. The nomination of Michael Pack as the head of the US Agency for Global Media also appears to have stalled. This hinders any efforts to reform the US tax-payer funded Voice of America Persian, which has become a joke among Iranians who follow the constant staffing changes, policy changes, and lacks diverse views, damaging US credibility and its public diplomacy efforts day by day.

The Trump administration itself appears to know that its Iran policy isn’t working. The International Crisis Group’s new report states: “A preliminary internal assessment by the administration described to the Crisis Group purportedly concludes that the US approach has yet to curb Iran’s behavior or entice Tehran back to the negotiation table.”

The Iranian regime knows how democracy works. They know there will be another presidential election in 2020 and are ready to wait it out to deal with a possible future administration instead. This is what the Islamic Republic has been doing since 1979. This is why many, including this author, believe that the only Iran policy that will work is a serious and long-term commitment by successive US administrations that will lead to a free and democratic Iran.

The Trump administration hasn’t engaged in any serious effort to unify Iran’s pro-democracy opposition groups to lead a free and democratic Iran in the future. Any further delay to do so may have tragic consequences for Iran and the Middle East. The Iranian regime may fall in the complete control of the IRGC who may continue to expand their menacing behavior in the Middle East against US forces and allies. The Iranian regime may collapse, and foreign actors may try to force unpopular and undemocratic forces to head the possible new regime. Worst yet, foreign actors may fan the flames of ethnic tension in Iran and cause a civil war. None of these should be acceptable to the Trump administration or any future US administration that is interested in an Iran that will be a force for stability and prosperity in the Middle East and the world.

An uncontrolled and unintended collapse of the Iranian regime will further destabilize the Middle East and further push back the hopes and aspirations of the Iranian people for democracy and freedom. There is vast dissatisfaction with the regime amongst the Iranian public and they exhibit their dissatisfaction daily through demonstrations, labor strikes, hunger strikes and other acts of non-violent civil disobedience. However, Iranians revolted forty years ago and didn’t get the regime they were hoping for.

If the Iranian people are to suffer through more sanctions or are to risk life and limb, they need to know why they are doing so and what future awaits them.