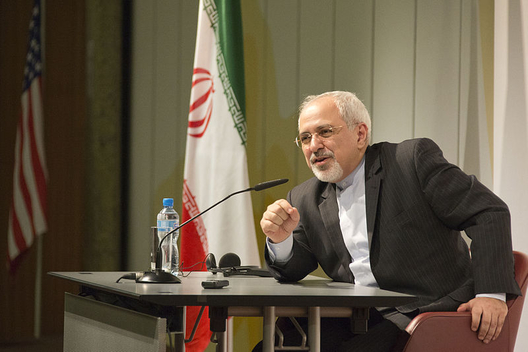 As is so often the case with the current occupant of the White House, a presidential tweet muddied the message of the rest of the Trump administration.

Iranians had been focusing on Secretary of State Mike Pompeo’s “Supporting Iranian Voices” event at the California-based Ronald Reagan Presidential Foundation and Library. But shortly after Pompeo finished speaking on July 22 about US support for Iran’s beleaguered people, President Donald Trump tweeted an all caps warning to Iranian President Hassan Rouhani to “NEVER, EVER THREATEN THE UNITED STATES AGAIN OR YOU WILL SUFFER CONSEQUENCES THE LIKES OF WHICH FEW THROUGHOUT HISTORY HAVE EVER SUFFERED BEFORE.” The tweet, which suggested the US was poised to destroy Iran, was posted just as Iranians were waking up on Monday morning.

The threat was supposedly prompted by Rouhani’s statement earlier that day, warning the US not to attack Iran. “America should know that peace with Iran is the mother of all peace, and war with Iran is the mother of all wars,” Rouhani had said. His comment, suggesting that any conflict between the US and Iran would be both bloody and long-lasting, echoed Iraqi dictator Saddam Hussein threats after his troops invaded Kuwait in 1991.

National security advisor John Bolton doubled down on the Trump tweet claiming that the president had told him that if “Iran does anything at all to the negative, they will pay a price few countries have ever paid.”

The Iranian government response was slower and more measured.

Mohsen Rezaee, a former commander of the Islamic Revolutionary Guard Corps (IRGC) and the current head of a body assigned to resolve disputes within the government, responded on Twitter: “you have more than 50,000 troops under Iran’s blade and you are making maniacal threats. You must be cautious.” Similarly, the head of the Basij paramilitary force, Gholamhossein Gharibpour, called Trump’s tweet “psychological warfare” and claimed that the US president wouldn’t dare take “actions against Tehran.” The Iranian Students News Agency (ISNA) reported that Judiciary Chief Sadegh Larijani—singled out by Pompeo as a “thieving thug” worth $300 million—had said that “any illogical move by the United States would entail a memorable response.”

It wasn’t until evening, Tehran time, that the Rouhani administration reacted directly. The Twitter-savvy Foreign Minister Mohammad Javad Zarif tweeted: “COLOR US UNIMPRESSED: The world heard even harsher bluster a few months ago. And Iranians have heard them—albeit more civilized ones—for 40 years. We’ve been around for millennia and seen fall of empires, including our own, which lasted more than the life of some countries. BE CAUTIOUS!” Meanwhile a senior advisor to the Iranian president tweeted that the biggest threat to the United States was its own president and called Trump not only a “danger” to the American people, but to the international community.

State-run Mehr News Agency editor Ali Rajabi tweeted, “Tonight, I retweeted tweets from reformists that under normal circumstances I would’ve never retweeted. The opposite has happened for sure, too. Mr. Pompeo, you’re a fool to have united us!”

Throughout Rouhani’s presidency, in the lead up to and after the signing of the Joint Comprehensive Plan of Action (JCPOA), there has been a tug-of-war between his pragmatic faction and more hardline groups. The US decision to quit the JCPOA and the mounting propaganda war emanating from Pompeo’s State Department have managed to convince the factions to put aside their differences in opposition to the United States.

After the State Department announced in June that the Trump administration was pushing for zero Iranian oil imports by Nov. 4, the official Islamic Republic News Agency (IRNA) quoted Rouhani as saying that the United States had not thought about the consequences of such a policy, hinting at the possibility of closing the Strait of Hormuz. This prompted much praise from hardliners including IRGC Qods Force Commander Qassem Soleimani. In a letter published by IRNA, Soleimani said that he kisses Rouhani’s hand for his “wise and timely comments.”

As the Trump administration tests the Iranian government’s resolve, it’s becoming clear that Rouhani will have to match his US counterpart’s posturing. Rouhani not only has to defend the nation of Iran from outside pressure, but to save face in order to stay in office.

When protests broke out last month in Tehran’s grand bazaar and neighboring shopping centers over the continued devaluation of the Iranian rial against the US dollar, a hardline member of parliament proposed impeaching the Iranian president if he is unable to resolve the issue.

But Trump’s Iran policy has given Rouhani an opportunity to deflect dissatisfaction with his performance. Every time Rouhani puffs out his chest, he gains the respect of his opponents and secures his presidency.

This is what the Trump administration doesn’t understand. Pressure from the outside—particularly threats of war—only rallies the Iranian government and people. Thirty-nine years of hard stick US diplomacy has neither changed Iran’s policies nor toppled its government.

If Trump was hoping that his threats would get Tehran to the negotiating table, in the way that his “fire and fury” tweet did with North Korea, he was wrong.

Instead, Trump is giving fuel for the Iranian government to maintain a policy of resistance until the next US president takes office. Maybe then they’ll sit at the bargaining table again.