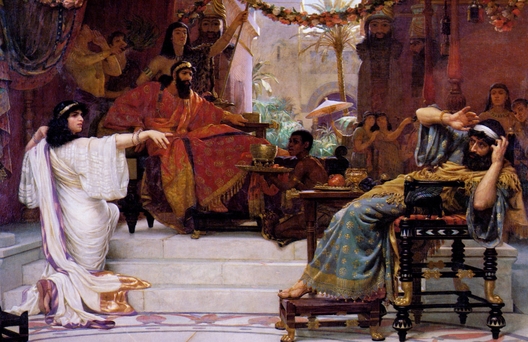 Those of us who use social media as a means of procrastination are familiar with the “Which… Are You?” tests. These quizzes are obviously not exact. This author was classified as a Hufflepuff when she obviously should have been a Ravenclaw, while Ringo Starr took the “Which Beatle Are You?” test and got John Lennon.

It seems that the currently trending quiz is “Which Biblical Iranian Character Is Donald Trump?” In late March, while the Jewish people celebrated Purim, the Feast of Lots—which commemorates events described in the Biblical Book of Esther—US Secretary of State Mike Pompeo visited Israel, and the media feasted with the headlines such as: “Mike Pompeo said it’s possible that Trump is the modern-day Esther,” “Holy Moses. Mike Pompeo thinks Trump is Queen Esther,” and “Mike Pompeo says it’s ‘possible’ Trump was sent to save the Jewish people from Iran.”

On March 21, Pompeo gave an interview to CBN, the Christian Broadcast Network in Jerusalem. Its host, Chris Mitchell, posed this long question: “Esther, 2,500 years ago saved the Jewish people, with God’s help, from Haman. And now, 2,500 years later, there’s a new Haman here in the Middle East that wants to eradicate the Jewish people just like Haman did—the state of Iran. Could it be that President Trump right now has been raised just for times as this, just like Queen Esther, to help save the Jewish people from an Iranian menace?” To which Pompeo replied: “As a Christian, I certainly believe that’s possible.”

That’s all he said. Pompeo was merely responding to the CBN host’s comparison. And probably without properly reading the Book of Esther.

Esther saved the Jewish people, but there are a few differences worth noting. First, Esther was Jewish herself. After the Persian King Xerxes gave an illegal order to the queen, his first wife, she is then expelled for failing to comply. Xerxes then marries Esther, a young girl, who hides her identity and takes orders from her adult male cousin, Mordechai. In the end, Esther uses her wisdom and charm to save her own people from her husband’s decree, issued under the influence of his conniving grand vizier, Haman. Historicity aside, US President Donald Trump does not possess any of Esther’s characteristics.

The character in the White House most similar to Queen Esther is First Lady Melania Trump: a beautiful, young immigrant girl who is married to the most powerful man in the world. However, Melania was already married to Trump when he took office, did not hide her identity, and has not had a chance to save the Slovenian people from any menace.

There are other points to be compared between the two stories: Haman was not Iranian but an Amalekite. What’s also worth noting is that the Persian court essentially serves as a setting for the last fight between two Semitic peoples, which Iranian Foreign Minister Mohammad Javad Zarif pointed out in a tweet, among other truths.

One may compare the current regime in Iran to Haman: Islam being a Semitic religion and the black turban on the Supreme Leader’s head signifying he is a descendent of Prophet Mohammad. However, as known to anyone who has read Supreme Leader Ayatollah Ali Khamenei’s book Felestin (Palestine) or follows Iranian discourse on the subject, the Islamic Republic’s official stance is not anti-Jewish but anti-Zionist. Jews in Iran are treated pretty fairly, and even have a representative in parliament. Moreover, Iran is not an enemy of Israel. Iran and Israel have a common enemy: the Islamic Republic. And while the discourse de jure is different, de facto the Islamic Republic is an enemy of Iran much more than it is of Israel. So if Trump is saving anyone, it would be the State of Israel, not the Jewish people.

Days after Pompeo’s remark, while visiting the White House on March 25, Israeli Prime Minister Benjamin Netanyahu compared President Trump to King Cyrus the Great. This is not the first time such a comparison was made by Netanyahu, or others. The comparison was also made by Evangelical Christians as early as 2016—long before Trump’s inauguration. Jewish movements such as the Nascent Sanhedrin, Mikdash Educational Center, and Temple in Zion have even minted two coins depicting the profiles of Trump and Cyrus.

However, Trump is not the first foreign leader who is compared to Cyrus the Great. Lord Balfour in 1917 was compared to Cyrus when he—as representative of the British Mandate at the time—announced the right of the Jewish people to return to their land, and Harry Truman, the president of the United States at the time of the establishment of the State of Israel, likened himself to Cyrus.

In the Bible and in Jewish tradition, Cyrus the Great is regarded as a Messiah, and as such he was even assigned Jewish genealogy. Although historically he is the son of a Median princess and Xerxes’ maternal grandfather, in some Jewish Iranian traditions he becomes the son of Queen Esther.

Cyrus’ declaration in the books of Isaiah and Ezra explicitly states that the God of Heavens spoke to him and told him to let the Jews go back to Judea and rebuild their temple. But in the Cyrus Cylinder—the archaeological evidence for this declaration, known as the first declaration of human rights—Cyrus allows all the people to go back to their lands and rebuild their temples. In order to be a real Cyrus the Great, Trump would have to allow all peoples to go back to their homelands—which is more complicated today than in 539 BCE.

While Trump’s support of Israel against international public opinion is commendable, his comparison to Cyrus actually likens the US embassy in Jerusalem to the holy Temple of the Jews.

If this author had to liken Trump to an Iranian Biblical character, he would be King Xerxes. It was this ancient Persian king who ultimately saved the Jews in the Purim story. Xerxes allowed them to defend themselves against their enemies—and Trump does give Israel legitimacy against international public opinion. But that would not be an exact comparison either. Xerxes is depicted in the Book of Esther and by Greek historians, not only as a hedonist and adulterer, but also as a man who is controlled by women and sometimes respects them—and that comparison is a whole other story.

Thamar E. Gindin is a core faculty member in the Department of Middle Eastern Studies at Shalem College of Liberal Arts in Jerusalem and a research fellow at the Ezri Center for Iran and Persian Gulf research at Haifa University. She is the author of several books on Iran, including The Good, The Bad and The World: A Journey to Pre-Islamic Iran and The Book of Esther Unmasked, which was also published in English. She hosts two Hebrew podcasts about Iran. Follow her on Twitter: @thmr.