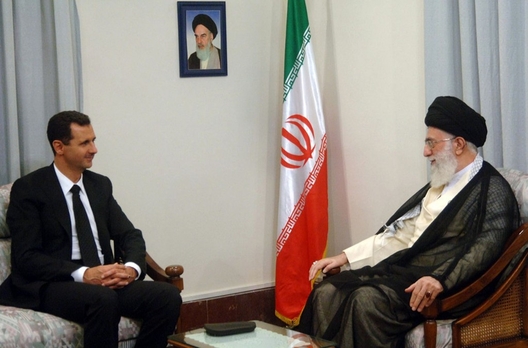 The Tehran-Damascus-Hezbollah trilateral partnership has been decades in the making. It pre-dates the Syrian civil war, has strengthened as a result of the war and will likely endure in the post-war years.

After the Iranian revolution in 1979, shared enmity of Iraqi President Saddam Hussein, Israel and the United States brought Damascus and Tehran together. Following the Israeli invasion of Lebanon in 1982, Tehran and Damascus joined forces to found Hezbollah, mainly to enhance their respective deterrence capabilities against Israel and the United States. The withdrawal of Syrian forces from Lebanon in 2005, the 2006 Hezbollah-Israel war and Hezbollah’s role in the Syrian civil war since 2012 turned the Lebanese proxy into a strategic partner and earned the Party of God a seat at the grownups’ table.

Tehran has played a careful long game in the Syrian civil war. One component of this game is to outsource most of the fighting to thousands of loyal Syrian militias, Hezbollah and Shia fighters from Iraq, Afghanistan, and Pakistan. By doing so, it minimized Iranian casualties and claimed it had only sent advisors to Syria. Another component is to work with the Syrian authorities to integrate Syrian militias trained and funded by the Islamic Revolutionary Guards Corps (IRGC)—like the Local Defense Forces (LDF)—into Syrian military structures.

Bashar al-Assad needs Tehran and Hezbollah’s assistance to solidify his hold on power. Having emerged victorious from the war against the Syrian armed opposition, Assad now reigns over a destroyed country, an economy that is a fraction of its pre-war size, a deeply polarized population, and a military that will need years to replenish its ranks and to strengthen its capacities. Assad’s ambition to restore and hold control over all of the Syrian territory requires sustained military support from Tehran and Hezbollah. Withdrawal of US forces from Syria adds another stressor on Syrian forces and its allies as it requires diverting resources to sustain the fight against the Islamic State of Iraq and al-Sham (ISIS) which until now has been mainly shouldered by the US and the Kurdish-majority Syrian Democratic Forces (SDF).

Moreover, Assad does not have other allies he can trust. Russia is not the reliable and trustworthy ally Iran and Hezbollah have proven to be. Unlike Iran and Hezbollah, Russia does not share Assad’s enmity to Israel and the United States. Moscow’s acquiescence, if not blessing, to the ongoing Israeli air campaign against regime, Iranian and Hezbollah assets in Syria reinforces Assad’s belief that Russia cannot be counted on in a future confrontation against Israel.

Moscow’s prioritization of its relationship with Ankara has also been a complicating factor to Assad’s quest to restore sovereignty over Syrian territories. Rather than allowing Assad’s military campaign to regain control of Idlib, Russia instead struck a de-escalation agreement with Turkey. While maintaining the need for Damascus to regain control of the territories from which US forces will withdraw in northeastern Syria, Russia has been engaging in talks with the leadership of the Kurdish-majority SDF about future governance arrangements that will prevent a Turkish military invasion east of the Euphrates and preserve some of the political autonomy they have secured thanks to the US military assistance.

Tehran and Hezbollah claimed President Donald Trump’s decision to withdraw US forces from Syria as another victory for the Resistance Axis. But this claim can prove to be a double-edged sword for the decision-makers in Tehran. On one hand, it denies them the argument justifying divesting resources outside the country for the war in Syria in the name of countering the US military presence there. On the other hand, as Iran continues to find it difficult to translate its military victory in Syria into economic gains, more questions will arise in Iran about the necessity of continuing to shoulder the costs of military and economic support for the Assad regime in the midst of an ongoing economic crisis in the country. A battered Syrian market, US sanctions, competition from Russian and Turkish businesses, and Assad’s prioritization of his Syrian cronies in the process of post-war reconstruction have so far limited Iran’s efforts to increase its economic clout in Syria.

While Trump’s withdrawal decision expands Iran’s maneuvering room in Syria, it also accentuates the ongoing competition among the three Astana guarantor states for influence in shaping Syria’s future. Russia and Turkey have worked separately and jointly to restrict Iran’s ability to forge Syria as part of its sphere of influence. While Moscow has to date not prevented Iranian military entrenchment in Syria, including what is being reported as permanent military bases outside Damascus with armed drones capable of reaching Israel, senior Russian officials have said on numerous occasions they do not see justification for a permanent Iranian military presence in Syria.

Turkey’s Olive Branch operation in Efrin in northern Syria reflects Ankara’s intention to play a central role in shaping the future of northern Syria even if this means ignoring Iranian interests. Tehran’s reserved reaction to the operation partly reflects its recognition of Turkish interests in Syria and partly approval of Turkey’s role in providing a counterweight to the American designs for northern Syria. The US drawdown of forces will create new tensions between Ankara and Tehran as it eliminates the common ground between the two countries formed on the basis of their shared opposition to US policies in northeastern Syria, instead shining the spotlight on their divergent policies vis-à-vis the Assad regime as Tehran pushes for Damascus’ regaining control of the areas now controlled by the US-trained SDF.

The US withdrawal decision pushed Moscow, Ankara and Tehran into a scramble about who will get to decide the future of northeastern and northwestern Syria. The trilateral Damascus-Tehran-Hezbollah axis is again pushing for a military campaign to retake Idlib, similar to what they did in Aleppo. They argue that the takeover of Idlib by Hay’at Tahrir al-Sham (HTS) has eliminated the possibility of a negotiated end game since HTS is a UN-listed terrorist organization. In that eventuality, Damascus will again be depending on its strategic partners to provide “boots on the ground.”

In the northeast, Assad is least incentivized to reach an agreement with the SDF now that he has all the cards. There are indirect talks between Damascus and Ankara over the future of that region. A negotiated endgame that will ensure return of the Syrian regime forces to the Syrian-Turkish border region is an increasingly likely scenario.

Randa Slim is a senior fellow and the director of the Program on Conflict Resolution and Track II Dialogues at the Middle East Institute, and a nonresident fellow at the Foreign Policy Institute of the Johns Hopkins University School of Advanced International Studies. Follow her on Twitter: @rmslim.