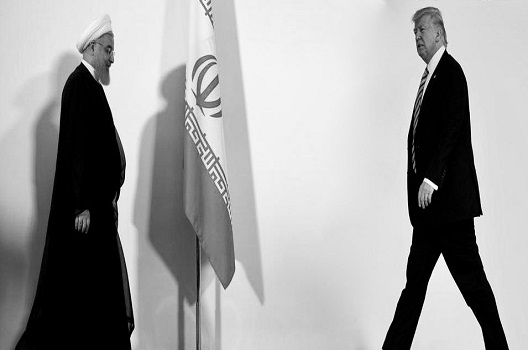 The telephone conversation between Presidents Hassan Rouhani and Barack Obama in 2013, the numerous talks between Secretary of State John Kerry and Iranian Foreign Minister Javad Zarif during two years of nuclear negotiations, and a multilateral meeting last year that included Zarif and then Secretary of State Rex Tillerson, demolished many taboos in regard to direct contact between Iran and the US.

The US and Iran should negotiate, but meaningful steps need to be taken in advance and the objective must be to solve all major bilateral issues.

Donald Trump’s victory in 2016 has complicated the road ahead even as he has recently signaled a willingness to meet with Rouhani in the interest of “world peace.”

Trump’s objections to the Joint Comprehensive Plan of Action (JCPOA) have often seemed more personal than strategic. In August 11, 2015, the then newly minted presidential candidate stated his objections to the just-concluded JCPOA in an interview with CNN. “First of all, I would have doubled the sanctions,” Trump said. “Then I would have said, before we start, I want our prisoners back, then after that, I would have made a good deal.”

Trump, who called the JCPOA “the worst deal ever negotiated,” carried out his threat to withdraw unilaterally from the agreement on May 8. On Aug. 7, the US re-imposed the first tranche of sanctions that had been lifted under the deal. Yet days before, Trump said in response to a question at a press conference that “I would certainly meet with Iran if they wanted to meet. I don’t know that they’re ready yet. They’re having a hard time right now…  If we could work something out that’s meaningful, not the waste of paper that the other deal was, I would certainly be willing to meet.”

Continuing the good-cop, bad-cop routine, a statement published by the White House on Aug. 6 with respect to the re-imposition of sanctions called the Islamic Republic “a murderous dictatorship that has continued to spread bloodshed, violence, and chaos.”

The disparate statements and tweets are not lost on the Iranian leadership. The fact that the US abandoned its obligations under the JCPOA and re-imposed illegal unilateral sanctions on Iran seriously damaged the credibility of the current and future US presidents.

Rouhani responded to Trump’s offer in a televised interview Aug. 6. that “negotiations have no meaning next to sanctions…If an enemy has stabbed you and asks you to negotiate, it is expected that he first removes the knife.” Rouhani thus appeared to condition new talks on a US return to the JCPOA.

A number of Iranian officials have ruled out any direct talks. The head of the Islamic Revolutionary Guard Corps, Gen. Mohammad Ali Jafari, said to Trump in a statement: “You will take to the grave the dream of Iranian officials asking you for a meeting or getting the permission to meet you from their nation. You would never live to see that day.”

The realization that conflicting interests need to be solved in a collaborative manner is a necessary prerequisite for meaningful dialogue. In line with William Zartman’s ripeness theory, Iran and the US are stuck in a mutually harmful stalemate. The persistence of unilateral efforts to undermine each other has only led to hardening blockage, rising costs, and damage to the national interests of both countries.

The Trump administration’s policies have negatively impacted Iran’s economy and created a sense of uncertainty about the future. The value of the Iranian currency has dropped significantly in the unofficial markets, prices have risen sharply and many producers are hesitant to sell their goods fearing loss of access to raw materials. There is little doubt that mismanagement has exacerbated these problems and Iranian leaders have been trying to formulate a package to minimize the impact of US sanctions while changing decades-old policies that have hurt the national economy. However, hampering global trade with Iran will only make this process more difficult and harm the Iranian people without achieving US goals of changing Iranian policies.

China and Russia will be the primary benefactors of the sanctions. China has rejected US pressure to end imports of Iranian crude, and reports state that China is preparing to fill the void if French carmakers abandon their joint ventures in Iran. Russian companies will benefit from the re-imposition of sanctions as well. Russia is promoting its new Sukhoi Superjets as a replacement for the Airbus and Boeing contracts that have been abrogated. Iran is also seeking to boost trade with other Asian countries and signed a Treaty of Amity and Cooperation with the Association of Southeast Asian Nations on July 21.

Negotiations involve what Aristotle called “deliberative discourse,” in which actors seek negotiations not as an end, but as a means of arriving at a win-win outcome. The will to arrive at a mutually agreed upon solution is a key requirement.

Seyed Hossein Mousavian, a former Iranian diplomat now a nuclear policy specialist at Princeton University, argued in a conversation with this analyst that, “By departing unilaterally from the JCPOA, President Trump practically killed confidence and credibility of any further possible agreement with the United States. That is why the idea of a Trump-Rouhani summit has been ignored by Tehran.” To make Trump-Rouhani summit possible, he said, “the White House should take some meaningful confidence building measures.”

Amir Handjani, a senior fellow at the Atlantic Council’s South Asia Center, agreed that, “If Iran sits down with Trump it needs to walk away with something tangible.” He argued that “President Rouhani can ill afford a Kim Jung-un-like photo op without the US taking tangible steps to ease sanctions. Anything short of that and Rouhani and the entire Iranian system will be viewed as incompetent and impotent, which will lead to even more despair among Iranians and make it almost impossible for a future Iranian government to sit down across from American negotiators and discuss anything of significance.”

In return, Iran should offer a good will gesture, perhaps the release of dual nationals as occurred in 2016. Iranian-Americans Bagher and Siamak Namazi, as well as Chinese-American Xiyue Wang are the most publicized cases that the US government has raised.

Another key area for talks is the conflicts in Syria and Yemen, where both Iran and the US are keen on finding durable solutions. In Rouhani’s televised interview, he mentioned that all foreign militaries will have to leave Syria soon, including US forces, hinting that Iran might do so as well.

Agreements on principles are necessary for successful negotiations along with adhering to the basic tenets of international relations that are enshrined in the Charter of the United Nations. Furthermore, Iran and the US can utilize aspects of the 1955 Treaty of Amity, Economic Relations, and Consular Rights  that established a reinvigorated relationship, and the Algiers Accord of 1981 that ended the hostage crisis. A list of twelve demands by Secretary of State Mike Pompeo, and fifteen demands by Zarif can be points of conversation, not preconditions for holding talks.

According to a HuffPost/YouGov survey, only twenty-three percent of Americans would support a US war on Iran, while fifty-three percent are opposed. Americans also object to a further rise in gasoline prices, which would be inevitable if tensions between Iran and the US continue to rise.

Instead of deriding moderates in Iran as “unicorns,” the Trump administration should take advantage of the most competent foreign policy team in the Islamic Republic’s history. Both Iran and the United States have missed multiple opportunities for dialogue and détente in the past thirty-nine years and allowing another opportunity to pass would be a loss not only for Iran and the US, but for the international community.

Rouhani and Trump will attend the 73rd United Nations General Assembly in New York and are scheduled to give their speeches on Sept. 25. Not only Iranians and Americans, but the entire international community, should encourage, mediate and set the stage for the two leaders to initiate a constructive dialogue that leads to fruitful negotiations.

Mehran Haghirian is a PhD Candidate at Qatar University’s (Persian) Gulf Studies program in Doha, and a graduate of American University’s School of International Service in Washington, with a Master’s degree in international affairs and a focus on Iran and the Persian Gulf. Read his Thesis: “Effectuating A Cooperative Future Between Iran and the Arab States of the Persian Gulf.” Follow him on Twitter @MehranHaghirian