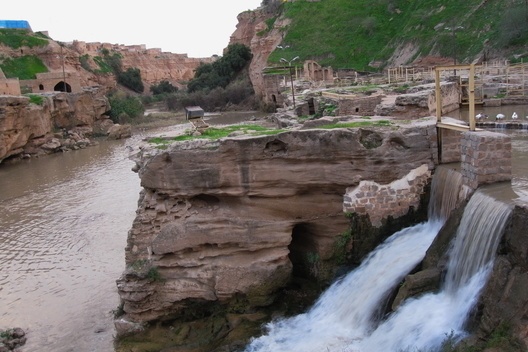 A drinking water shortage set off this week’s round of protests in oil-rich Khuzestan province, home to much of Iran’s ethnic Arab minority. Protesters in cities including Abadan and Khorramshahr damaged property and clashed with police, leaving at least one demonstrator injured.

Protests over water are not unprecedented in Iran. Similar protests have popped up in various provincial towns and cities for over a decade, sparking security and sociopolitical challenges.

Rather than address the growing water crisis, a top Iranian official accused Israel and unnamed neighboring countries of robbing Iran of its clouds and snow. Ahmad Vazifeh, an official from the Iranian Meteorological Organization, dismissed the statement, saying that “it was not possible for a country to steal snow or clouds.” Vazifeh also acknowledged that drought was a worldwide trend that had hit not only Iran, but Iraq, Turkmenistan, and other countries.

The Israeli prime minister’s Persian-language twitter account was quick to troll the comment. “Don’t be surprised, we use these clouds to put out the Hamas fires backed by the Iran regime,” a reference to the fire kites from the Gaza Strip that have costed Israel $2.5 million in damage.

On June 10, Israeli Prime Minister Benjamin Netanyahu released a video with Persian subtitles offering his country’s expertise to Iran as it faces a drought. The video included links to the Israeli government’s Persian-language website and Telegram channel with information about Iran’s water shortage. (Since its launch, the channel has garnered about 92,000 subscribers.) Iranians on social media mostly criticized the prime minister and suggested that Israel use its knowledge to help Palestinians.

The Iranian foreign ministry called Netanyahu a “deceitful showman,” and claimed Tehran was capable of solving its own problems. Weeks later on June 29, Iranian Energy Minister Reza Ardakanian warned that Israel “is using all the latest scientific tools to steal water in the Middle East and we should not let it interfere in our water crisis.”

Though President Hassan Rouhani has called Iran’s water scarcity a national security issue, a toxic mix of paranoia and blaming external enemies has become the modus operandi for various echelons of the Iranian government.

According to Iran’s National Drought Warning and Monitoring Center , the period betweenSeptember and December 2017 was the country’s driest in over sixty-seven years, and about 40 percent of Iran is undergoing a “serious drought”. A recent Atlantic Council issue brief by ecologist David Laylin described the country’s environment as “reaching a crisis point.” Aside from climate change, Iran is also facing biodiversity loss, deforestation, desertification, land degradation, and severe air and water pollution.

The excessive construction of dams, which commenced under the shah, was exasperated by the Ahmadinejad administration and the Islamic Revolutionary Guards Corps’ engineering arm, which redirected rivers and in turn intensified the drought in places like Esfahan and Urmia. However, some of Iran’s climate change problems—the burning of fossil fuels and the mismanagement of water resources—predate 1979.

While the shah attempted to resolve environmental problems by inaugurating the Department of Environment, the monarchy had little support from the Iranian people and turned much of its focus on economic development. After the 1979 revolution, the Department of Environment suffered budget cuts as well as corrupt and incompetent management. President Rouhani has attempted to remedy some of these issues by increasing the budget and appointing experts, but his reform attempts have met several road blocks.

The Rouhani administration hired the Imperial College London’s Iranian-born water conservation expert Kaveh Madani to serve as the deputy head of the department, an “outsider” charged with tackling Iran’s water challenges directly. Butfrom the beginning of his term, hardliners viewed Madani as well as fellow environmentalists with great suspicion.

In the wake of the December-January Iran protests, a dozen environmental activists were arrested by the intelligence arm of the IRGC, including Kavous Seyed-Emami, a prominent Canadian-Iranian academic and environmentalist. The IRGC accused the group of passing information to Israel’s Mossad and the CIA on Iran’s missile bases during their work studying the endangered Asiatic cheetah. On February 9, weeks after Seyed-Emami’s incarceration, officials said he committed suicide in Tehran’s notorious Evin Prison—which shadowed a string of other suspicious prison deaths. Following this news, it became apparent that Madani, the deputy head of the Department of Environment, was also brought in for interrogation.

On April 17, Madani broke the news on Twitter that he had left Iran. He wrote, “Yes, the accused fled from a country where virtual bullies push against science, knowledge and expertise and resort to conspiracy theories to find a scapegoat for all the problems because they know well that finding an enemy, spy or someone to blame is much easier than accepting responsibility and complicity in a problem.”

Iran’s environmental problems will worsen as long as hardliners view environmentalists with suspicion. The government needs to be clear-eyed about the consequences of ignoring these problems and to find viable solutions.

They only have to look at Syria’s civil war to understand why they can’t continue to kick the water can down the road.

Holly Dagres is editor of the Atlantic Council’s IranSource blog and an Iranian-American analyst on Middle East affairs specializing on Iran. She is also the curator of the weekly newsletter, The Iranist. Follow her on Twitter: @hdagres.