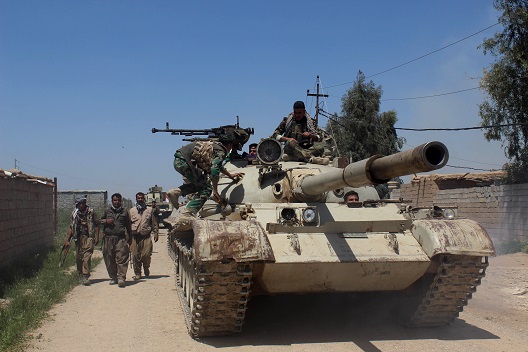 Should the United States arm the Kurdish Peshmerga directly, without the consent and participation of the government in Baghdad? This is a critical question that US officials, both in the White House, the Defense Department, and the US Congress, have no doubt asked themselves ever since mechanized US troops stormed across the Iraqi border in March 2003 to overthrow Saddam Hussein’s regime. The debate, however, has become far more pronounced in Washington this year: the long, start-stop war against the Islamic State (ISIS or ISIL) in Iraq’s northern and western provinces has given added impetus to the option. Send arms to the Peshmerga, the argument goes, and the Kurds will have the military resources, armored vehicles, and counter-IED equipment they need to speed up the anti-ISIS offensive.

To date, the Obama administration has resisted calls to circumvent the Iraqi government, for understandable reasons. Authorizing the export of weapons to the Peshmerga would publicly challenge the authority and sovereignty of the central Iraqi government, an embarrassment that Prime Minister Haider al-Abadi does not need now. Providing weapons and ammunition to Kurdish units, according to Secretary of Defense Ashton Carter, “could put some of our personnel at risk” and could potentially encourage the Kurdistan Regional Government to work for independence far sooner than they originally planned. Bypassing the central government in Baghdad would also run contradictory to what US policy in Iraq has been since 2003: to support and work for a unified, federal Iraq for all Iraqis, regardless of ethnicity or sectarian identity.

Yet, at the same time, the benefits could be just as monumental: assisting a critical US ally in the Middle East and the most trusted US partner in Iraq at a time when the Kurds are doing much of the leg work against ISIS militants in the north.

Washington is divided on the Kurdish question. The White House, Pentagon, and State Department remain opposed (a position supported by Prime Minister Abadi’s administration), but a growing constituency in the US Congress have recently pushed to make direct arms shipments to the Peshmerga as the law of the land. House Foreign Affairs Committee Chairman Ed Royce has reintroduced a bill (with forty-four cosponsors) first crafted last year that would authorize defense exports to the Kurds for an emergency period of three-years for the sole purpose of defending the people of the Kurdistan region and facilitating military operations against ISIS. Senators Joni Ernst and Barbara Boxer introduced a companion bill in the Senate for the same purpose. The House Armed Services Committee, in the meantime, went a step further—designating the Peshmerga and “Sunni tribal security forces” as countries in order to accelerate US weapons shipments under the Arms Control Export Act. This proved to be a bridge too far for Prime Minister Abadi, who said in a statement released by his office that his government “reject[s] the proposed bill… which will only lead to further divisions in the region.”

Unfortunately, the debate in Washington on authorizing US defense exports to the Peshmerga (and Sunni tribal forces on the ground in Anbar fighting ISIS) has clouded a question that is far more fundamental: are the bills filed in Congress even necessary to achieve the objective of cutting bureaucratic and political delays in Baghdad?

The short answer is no. Although the Peshmerga undeniably need more weapons of better quality, the fact is that the United States does not need to change the law or pass a controversial provision in the National Defense Authorization Act in order to do it. A far easier solution for getting these weapons into the hands of the Kurdish security forces (and the Sunni tribal fighters in Anbar province, which is sorely needed after ISIS militants humiliated Iraqi security forces out of Ramadi) entails President Barack Obama giving a tough, credible ultimatum to the Iraqi government. If the Iraqi Ministry of Defense does not deliver to the Kurds the needed defense materiel previously agreed upon by Washington, Baghdad, and Erbil, the United States will reevaluate its policy of routing all weapons shipments through the Iraqi government and extend its support to members of Congress who are working to change the law. The Iraqi government could avoid this outcome provided it makes good on its promises. In short, Iraq needs to act like a responsible power by recognizing the vital need for unity-of-effort to counter ISIS.

Such an ultimatum may seem like a foolish thing to do. The Iraqi security forces, after all, already struggle against ISIS in several parts of the country, including in and around the Baiji oil refinery and most recently in the effort to recapture Anbar’s provincial capital of Ramadi, taken over in an ISIS offensive that Iraqi forces were under-equipped to combat. But, the desperation of the Iraqi army is precisely why this ultimatum should be made now: it would be incredibly difficult for Prime Minister Abadi to refuse it. If the choice is between doing what the Iraqi government promised to do in the first place and losing valuable political support from Washington, it is not really a choice at all.

Passing legislation that would mandate US assistance to the Kurds and Anbari tribes, outside of Baghdad’s authority, is not needed at this time—nor would it do Prime Minister Abadi, who needs to manage a vast governing coalition heavily dependent on Shia Islamist politicians, any favors. Abadi would likely get far more blame from his political allies if the United States signed legislation into law than if he agreed to fast-track weapons to local forces, as he pledged to do when he was elected. Washington should do itself, the Kurds, and Abadi a favor by using pressure through private channels instead of taking the spat public through a high-profile bill.

Daniel R. DePetris is a Middle East analyst at Wikistrat, Inc. and a contributor to The National Interest.

Image: Kurdish peshmerga forces sit on top of a tank on the outskirts of Kirkuk April 18, 2015. (Reuters)