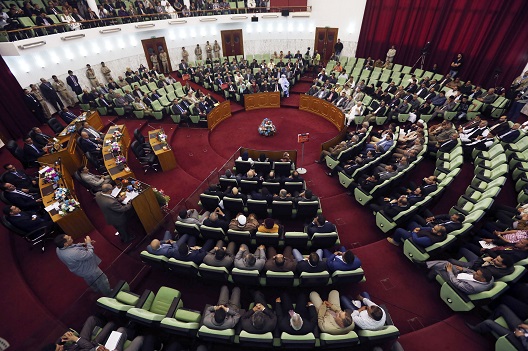 Members of the special body tasked to draft a new constitution for Libya and members of the General National Congress (GNC) gather during the body's first meeting in Bayda April 21, 2014. (Reuters)

Talking about and discussing a constitution for Libya at this moment may seem a futile exercise. The situation on the ground is such that even the simplest idea of a Libyan State may seem surreal, given the diverse interests battling for control of the country and its resources. Three governments are currently competing for power: the Tobruk-based House of Representatives (HoR), UN-brokered Government of National Unity (GNA), and Tripoli-based General National Congress (GNC). Unless the political leadership can reach a shared vision for Libya’s future, the competition for political power between these groups could lead to protracted conflict.

The HoR exercises limited control over parts of the historical province of Cyrenaica, the eastern portion of Libya. The international community had recognized this government as the only legitimate authority in Libya until recently, when this recognition was given to the GNA led by Fayez Serraj. A product of a lengthy and flawed UN-led negotiation, the internationally supported GNA sits in Tunis, waiting to see if the factions that exercise control over the former Libyan capital of Tripoli will agree to lend it their support. In the meantime, Khalifa Ghwell leads the GNC and enjoys the support of some Islamist-leaning militias from Tripoli and the city of Misrata. The GNC exercises its functions as if it were the only legitimate authority. The rest of the country exhibits a highly fragmented power structure among hundreds of village and tribal militias, Islamist jihadist groups, and criminal organizations.

Any reference to a constitution in this context appears anachronistic at best. But a deeper analysis of how the country got to this point may lead to a different conclusion. This analysis would focus on a vital missing ingredient in the post-2011 era: a serious discussion among Libyans regarding their national identity. No polity can thrive, no state can exist, and no authority can legitimately rule unless and until its citizens have subscribed to a shared vision that unites them and allows them to build meaningful institutions. In hindsight, rushing to the 2012 elections without previously engaging in a national dialogue process that would lead to national reconciliation between feuding actors—and to a shared concept of national identity—directly contributed to the power struggle that has paralyzed Libya today.

The fear of repeating this mistake should compel Libya’s political elite and its foreign advisors to pause and reflect—without rushing to empower one actor over the others. Unfortunately, given the volatile security climate, a broad, inclusive debate on the terms of citizenship is practically impossible. Still, for the sake of the success of the UN-led negotiation and the establishment of the new government to bring order and security in the country, a point of reference to unite all Libyans around a shared identity should be found. The national anthem and the flag chosen the day after the revolution of 2011 represent a positive start, but remain insufficient. The Constitutional Declaration enacted by the provisional National Transitional Council in August 2011—rushed and redacted to fill the post-Qaddafi void—also lacks the transparency or inclusiveness needed to provide a unifying reference point. The 1951 Constitution, as amended by Law No. 1 of 1963 which repealed the federal character of the political system and declared the Kingdom of Libya, does offer an opportunity around which Libyans could rally.

The constitution represented the efforts of a group of devoted patriots supported by the majority of the population in their struggle for independence. It identifies the character of Libyans, their religious values, and their political and social ideals. The Qaddafi regime later replaced these characteristics with an emphasis on transnational values such as Pan-Arabism, Pan-Africanism, and an uprooting of the traditional social system through a bizarre structure of direct popular governance, defined as Jamahiriya.

In February 2014, partially to offset this history, Libyans elected a Constitutional Drafting Assembly (CDA) to produce a draft of a new constitution to be put to a referendum within a year. This has not happened for many reasons. It is unrealistic to think that this task could be completed in the near term, given the fragmentation and polarization in Libya. So far, the CDA had only managed to develop an insufficient and hastily cobbled draft in October 2015. Rather than producing another non-transparent, non-inclusive, and therefore flawed document, the Assembly should immediately proceed to adopt (with some necessary modifications) the 1963 version of the constitution. With time and improved security in the country, lawmakers could and should engage experts and citizens at large in a process to modify the constitution that would provide the inclusiveness, transparency, and consensus necessary for such a fundamental document. In this way, the CDA would provide a great service to the country and give the new government and its institutions a legal framework within which to act. It would also provide the population with a point of reference from which they could recognize their common existence as a nation state.

The United Nations and the other members of the international community that have a stake in seeing stability and rule of law established in Libya should push for such a solution. Time is of the essence, but a rushed decision, such as adopting a hasty and improperly elaborated new constitutional draft could this time potentially be fatal to any resolution at all.

Fadel Lamen is a Nonresident Fellow with the Atlantic Council’s Rafik Hariri Center for the Middle East and chair of the Libyan National Dialogue Committee.