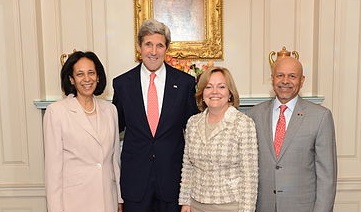 With the arrival of Ambassador Deborah Jones last month in Tripoli to assume the months-vacant ambassadorial post, there is a newfound opportunity to reinvigorate the relationship between Libya and the United States. Reports indicate that she received a warm welcome from the Libyan government and people who are eager to elevate their country’s engagement with the United States. Indeed, for the past nine months since the tragic events in Benghazi claimed the lives of Ambassador Chris Stevens and three members of his team, US-Libyan engagement declined as violent clashes continue throughout Libya and US policymakers grapple with securing their missions in Tripoli and around the world.

The United States still enjoys a great deal of popularity in Libya. An inert but well-meaning government and an inexperienced but vibrant civil society hold the United States in high regard and look to it for technical assistance and capacity building that would help Libya move forward. With the US mission in Tripoli now under the direction of a highly qualified and ambitious ambassador, there is a tremendous opportunity to harness that goodwill and lend more robust political support to fulfill Libya’s democratic aspirations.

There are several ways in which the United States can reinvigorate its partnership with and assistance to Libya, but it is important to understand that the deteriorating security situation in Libya is a consequence—not the cause—of a weakened central government with limited capacity to govern the transition, provide its citizens with public services, or respond to security breaches. As a result, its credibility and legitimacy are on the line in the face of emboldened armed militias, criminal organizations, and terrorist groups throughout the country. Armed militias, in particular, however disparate, are suspicious of efforts to disarm them and to empower opaque figures that they allege are part of the former regime. With the challenges of territorial control, credibility, and capacity intertwined, the issue of security and dismantling militias should be tackled with a multipronged approach:

These suggested measures will require a robust and shared commitment between Libyans and Americans. Fortunately, unlike its neighbors, Tunisia and Egypt, which have large, ineffective, and dysfunctional institutions, Libya is in this respect a tabula rasa. In working with their Libyan counterparts, US policymakers can be creative and original in devising solutions to Libya’s challenges without the burden of previously entrenched structures. With Ambassador Jones now at the helm of the US embassy in Tripoli, now is the time for the United States to rekindle its engagement with Libya, harnessing that country’s goodwill to address the shared security concerns and to realize hopes for its successful transition to a stable democracy.