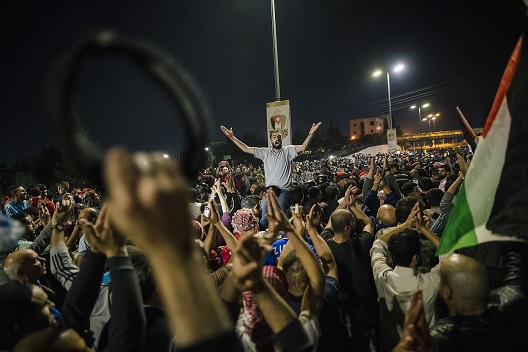 A mere eight days after protests against an unpopular tax law rocked the Hashemite Kingdom, Jordanians shot fireworks celebrating the June 7 government announcement to withdraw the legislation. A strong supporter of the austerity measure, Prime Minister Hani al-Mulki submitted his resignation on June 4 following the demonstrators’ calls for his ouster. “And popular will prevails,” declared a banner at one of the crowded victory rallies following incoming Prime Minister Omar al-Razzaz’s decision to drop the controversial measure. But with Jordan still suffering from deep economic woes and few signs of political liberalization, some in Amman are questioning whether these protests have actually achieved a dramatic victory.

While demonstrators commended Mulki’s removal, this step in itself hardly inspires confidence. Razzaz is the seventh Jordanian prime minister since 2011. “The prime ministers are there as scapegoats,” noted Rana Sabbagh, a former editor in chief of the Jordan Times. “Playing the musical chairs game is no longer going to help.” Suffice it to say that King Abdullah, who maintains substantial power in Jordan, retains his position indefinitely without being held accountable for any of the country’s financial woes.

When Mulki came to power in 2016, the debt had spiraled to about 90 percent of Jordan’s Gross Domestic Product (GDP), doubling Amman’s debt in less than five years. A senior European diplomat in Amman explained in an interview that he received warnings from Jordanian ministers that “hell could break lose” due to the IMF-backed austerity measures. Yet, Mulki removed subsidies and increased taxes to stop the debt to GDP ratio from climbing by five percent annually. “Mulki’s measures were essential in preventing Jordan from going insolvent,” noted Kirk Sowell, an Amman-based political risk analyst.

Mulki’s quick dismissal following popular pressure will make it more challenging for his successor to make the structural economic reforms necessary to reduce Jordan’s debt of nearly $40 billion, Sowell noted. To cut the ballooning debt, Razzaz will likely be forced to raise revenue by expanding the tax base, removing subsidies or cutting government employment, directly impacting Jordanians’ pocketbooks and leading to significant discontent.

Although street protestors rejoiced following the tax bill’s withdrawal, this legislation would not have significantly impacted the lives of average Jordanians. With only about four percent of Jordanians paying income tax, the current budget is unsustainable. The proposed bill would have lowered the taxable income for families to $22,520 per year while the intended taxable amount would still have been around three times higher than the average Jordanian income. Mulki’s law, critical in raising revenue, spared the working class.

Many in Amman are astounded by how little progress has been made in countering Jordan’s fiscal woes. “We really want to know how a country like Jordan ended up with this huge debt— 96 percent of the GDP—over all these years when we have started the IMF and World Bank economic reforms in 1989?” Sabbagh asked.

Razzaz could try cutting one of the largest expenses: government employment. Over a third of Jordanians work for the state’s bloated bureaucracy. But, facing an 18 percent unemployment rate—the highest in 25 years—this policy would likely cause additional mass protests. Razzaz’s hands are tied with no easy moves available to solve the economic nightmare.

Jordanians largely face the same financial hardships with the new prime minister. Bread prices are still double with subsidies unlikely to resume. Amman has remained the most expensive city in the Arab world, according to the Economist. And Razzaz hasn’t cut the burdensome February sales tax increase on 164 food and beverage items.

Razzaz’s government has also disappointed Jordanians who call for political reform. While many were hoping for fresh perspectives, his administration includes 23 cabinet members who previously served as ministers including 15 who served under Mulki. Jordanian activist Mohammed Shamma, expressed disillusionment at the return of Interior Minister Samir Mubaidin who has used his authority to suppress civil society.

Razzaz was not elected to the post. The former senior World Bank official received no public mandate to serve as prime minister even though the position wields significant influence over the nation’s economy. “The underlying concerns of all the different protest movements were the disconnected authoritarian nature of policy making and lack of popular input into the political process” explained Sean Yom, professor of political science at Temple University. “None of those underlying concerns have been fundamentally addressed.”

With Razzaz serving in the Mulki government, Jordanians have lost patience with the political system. “For the past 20 years, we keep recycling the same elite following the same path and expecting a different destination,” Oraib Rantawi, director of the Amman-based Quds Center for Political Studies charged. To prevent future fiscal mismanagement, Rantawi called for a stronger parliament that could act as a “watchdog” and hold authority accountable to prevent future mistakes.

Yet, dramatic political reform necessary to achieve such transparency faces roadblocks. A more inclusive parliament requires changing the election law, which is institutionally designed to favor tribal East Bankers at the expense of Jordanians of Palestinian origins. There is consistent talk of reforming the election law to make the legislature more democratic, but Sowell noted, “it’s a Houdini act: it’s always the same results,” cementing the status quo of a weak parliament which is disproportionately represented. Upending this system would upset King Abdullah’s base and add uncertainty during an already challenging period.

Some point to the Gulf States pledge of $2.5 billion in assistance to Jordan at a June 11 Mecca Summit as a tangible victory for the protestors. However, the current aid package is half of what Gulf States provided to King Abdullah in 2011, even though Amman’s debt has doubled and a tiny fraction of the $25 billion Saudi Arabia pumped into Egypt’s economy following the 2011 uprisings. The aid package includes World Bank loans and a deposit in Jordan’s Central Bank. Jawad Anani, a former Royal Court Chief, notes that the direct budgetary support will only be approximately $200 million annually, a relatively small amount given Jordan’s mounting debt of nearly $40 billion.

Cleaning up the streets after the protests and joining with security forces for a “group cigarette,” Jordanian demonstrators inspired the country. But following Mulki’s departure, Amman still faces a nightmare of skyrocketing debt, record-high unemployment, unaffordable cost of living, and weak political institutions. Razzaz’s government will be granted a honeymoon phase. However, since the economic woes will almost certainly remain and without any political horizon, it’s unlikely that the next wave of protests will end in such a peaceful and orderly fashion.

Image: Protests in Amman, capital of Jordan, in response to the proposed revision of the income tax law, and resulting price hikes. These pictures show protests happening in Amman's fourth circle, which is among the principle gathering points for protesters as it's located near the Prime Ministry of Jordan. Al Saadi