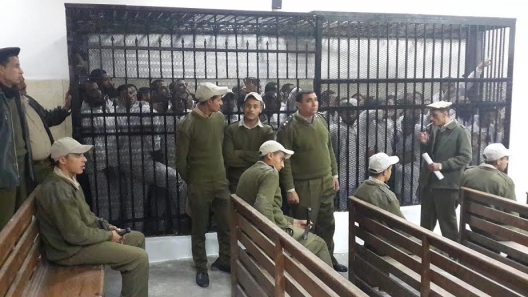 Since its establishment in the 1960s, the military judiciary in Egypt has caused much controversy. This controversy persisted after the 2011 Revolution, despite substantial legal and constitutional changes on the issue. With acts of violence increasing across Egypt in the past two years, the number of people referred to military trials has increased as well. In the most recent ruling, 273 defendants were referred to military courts on charges related to acts of violence in the Minya governorate, in conjunction with the August 2013 dispersal of the Raba’a al-Adaweya sit-in. This is not the first time civilians have been referred to military courts, nor will it be the last. The position of military courts within the Egyptian legal and constitutional system should therefore be examined, to closely understand the nature of these courts, apart from political considerations.

Military courts were established in Egypt by Law No. 25 of 1966, a law that has undergone several amendments, most recently on February 3, 2014. The most significant debate on the military judiciary focuses on its classification: whether it should be part of the judiciary, or a division attached to the armed forces?

While broad constitutional amendments were issued in January 2014, this article was only slightly amended to read: “The military judiciary is an independent judiciary that adjudicates exclusively in all crimes related to the armed forces, its officers, personnel, and their equals.”

Amendments to the Military Judiciary Law were then issued in February 2014—only days after the 2014 constitution was issued, with Article 1 now stating that: “The military judiciary is an independent judicial entity.” The military judiciary has thus become a fully-fledged judicial authority, whereby the judges (i.e. armed forces officers) are subject to the provisions of the law governing the ordinary judiciary in terms of the rights and duties of judges.

The appointment of military judges is subject to Article 54 of the law, stipulating that: “Military judges shall be appointed by a decision issued by the Minister of Defense, upon a nomination by the head of the military judiciary.” Furthermore, as per Article 3 of the Military Judiciary Law, as amended in 2010, military judges have legal immunity against dismissal, as in the case with civilian judges, as stipulated in the last paragraph of the 2014 constitution: “Members of the military judiciary shall be independent and may not be dismissed. They shall have all the guarantees, rights and duties stipulated for members of the judiciary.”

Jurisdiction of the Military Judiciary

This issue has long been in the broader political and legal discussion in Egypt over the past decades because of the referral of civilians to military courts, rather than the civilian legal system. This threatens one of the most fundamental rights of citizens: the right to a trial before a common law judge. Furthermore it is a violation to the independence of the judiciary, particularly if the crimes in question are of a purely political nature.

This has been the case since the enactment of the Military Judiciary Law in 1966, which stipulated in Article 6 —repealed in May 2012—that the President has the right to refer civilians to military trials for crimes committed in violation of the Penal Code or other laws. In other words, crimes were never a matter of military affairs. Article 6 used to state that: “upon declaration of a state of emergency, the President of the Republic may refer any crimes punishable under the Penal Code or any other law to the military judiciary.” A state of emergency was in effect throughout the rule of former president Hosni Mubarak—expiring only in May 2012—and so this Article enabled the president to refer civilian politicians and members of the opposition to military courts. At the time, these trials lacked the most basic guarantees of judicial independence and protection of the rights of the defense.

In light of the above, and after repeated demands by various forces in society—particularly after the January 2011 Revolution and expiration of the state of emergency in 2012—a significant amendment was made to the constitution. It stipulated that: “Civilians may not stand trial before military courts, except for crimes that harm the armed forces, and the law shall define these crimes.” The constitutional amendments of 2014 list the cases that are considered as attacks on the armed forces and related entities. These amendments were criticized for significantly broadening the jurisdiction of military courts over civilians. According to the broad interpretations in Article 204 of the constitution, any attack on armed forces personnel or facilities, the perpetrators, even if civilians, will be referred to military prosecution.

In this context, the incumbent president—who has the authority to pass laws, given the absence of a parliament—issued Law No. 136 of 2014 in October 2014, extending military jurisdiction to “crimes perpetrated against public facilities, utilities, and properties, referred to in Article 1 of this decree by law. The public prosecutor shall refer cases related to such crimes to the appropriate military prosecutor.” The most significant element of the law is that it subjects attacks on civilian facilities to the military courts jurisdiction. Hence, a new jurisdiction is introduced, not stated in the aforementioned Article 204 of the constitution, specifying that only attacks against military facilities fall under the jurisdiction of the military judiciary. The fundamental argument used to justify this law is that Egypt has been subject to acts of violence and terrorism that need to be confronted swiftly through the military judiciary. However, despite this justification, many jurists and analysts view law No. 136 of 2014 as unconstitutional, as it gives the military judiciary authority not stipulated in the constitution. Furthermore, it detracts from the jurisdiction of the common justice system, hence, a violation of its independence.

With the expansion in referring civilians to the military judiciary, nearly 3,000 civilians were referred to military courts since the Egyptian president issued Law No. 136 of 2014, according to the “No Military Trials for Civilians” rights group.

Referring civilians to trial before military courts for non-military related crimes, in order to expedite sentencing, shows a lack of confidence in the common justice system and its ability to create public deterrents as quickly as necessary. Furthermore, referral to the military judiciary, based on the political desire to pass certain sentences to deter political opposition, is a clear departure from the rule of law, and will continue to be a significant obstacle to the true democratic transition sought by the popular revolution of 2011.