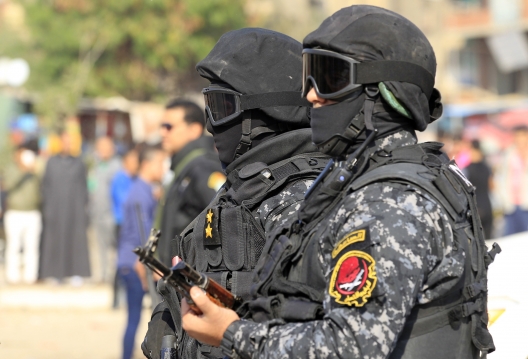 Four months after the congressionally mandated due date, the US State Department finally released its 2014 Country Reports on Human Rights Practices.  The report on Egypt paints a disturbing picture of the human rights crisis afflicting the country since the military ousted former president Mohamed Morsi of the Muslim Brotherhood on July 3, 2013, following mass protests against his rule.   Even though the report covers events that occurred last year, it is still worth a close read.   It shows how the immediate post-coup crackdown, which many observers hoped would be temporary and limited before a swift return to a democratic transition, expanded in 2014 into a systematic policy to crush nearly all dissent and reestablish an authoritarian system.  And nearly all the problems described in the 2014 report have continued, and in some cases worsened, in 2015.

President Abdel Fattah al-Sisi made clear upon taking office that fighting terrorism was his top priority. As the shocking July 1 coordinated attacks in North Sinai by the Islamic State’s Egypt affiliate, Sinai State, which left twenty-one soldiers dead, and the June 29 assassination of Prosecutor General Hisham Barakat—the first killing of a top Egyptian official since 1990—frighteningly illustrate, Egypt is facing rising and deadly terrorism.  Even before these recent episodes, throughout 2014 armed militants and other opponents of the state were carrying out regular attacks, killing hundreds of soldiers, police officers, and civilians. But as Assistant Secretary of State Tom Malinowski commented in the press conference releasing the report, “Egypt has used a real threat of terrorism to justify the prosecution of nonviolent opposition figures, human rights activists, and demonstrators.” Moreover, some observers worry that wide-scale repression carried out in the name of national security could help create a large pool of Egyptians who feel deeply aggrieved against their government—and ripe for recruitment by extremist groups.

Four of the most severe violations in 2014 documented in the report, as well as by Egyptian and international rights groups, are violence against demonstrators; widespread arrests; abuse of detainees; and pervasive impunity for officials suspected of involvement in such violations.

Following the security forces’ August 2013 violent dispersal of pro-Morsi mass sit-ins in Cairo, which Human Rights Watch (HRW) estimates may have killed as many as 1,000 protestors, and the November 2013 enactment of a highly restrictive protest law, along with a media campaign vilifying the opposition, 2014 saw a significant decline in large demonstrations. But many smaller demonstrations still took place, and the report states that “the government or its agents committed arbitrary or unlawful killings” while dispersing some of these gatherings.  It references reports that at least seventy-four Egyptians were killed at protests in 2014—sixty were killed on January 25, 2014 alone; local and international media reports suggest the total last year was more than ninety.

The report states that “human rights groups and international observers maintained the government detained or imprisoned as many as several thousand persons solely or chiefly because of their political beliefs or opposition to the government.” Many were Brotherhood members and Salafis rounded up following Morsi’s ouster. In 2014, the arrest campaign broadened to ensnare non-Islamist activists, especially prominent youth leaders.  The report also refers to “numerous reports” of security forces arresting bystanders who were simply “sitting in nearby cafes” or walking by protests, and of detaining family members and friends of wanted persons.

Regarding the scale of arrests, the report cites the Egyptian authorities’ estimate, provided to the Associated Press, of 16,000 persons arrested between July 2013 and March 2014.  It also states that “some NGO sources alleged authorities arrested as many as 40,000 persons” from July 2013 through December 2014.  According to the Cairo-based Arab Network for Human Rights Information (ANHRI), there were 42,000 detainees at the end of 2014.  Local rights groups have explained to the authors that it can be very hard to track detainee numbers accurately due to the opacity of the penal system, the fact that not all detentions are recorded immediately, and government harassment of those trying to document the plight of those in custody.

The authorities often used a combination of repressive legal powers—such as the protest law, the penal code, and an October 2014 decree extending military jurisdiction over “vital public facilities” defined to include roads and universities—to charge detainees with committing violence, disturbing public order, and threatening public security. This meant that nonviolent activities, such as demonstrating outside government buildings, often resulted in charges that could lead to the death penalty or life imprisonment.

Authorities kept some of these detainees locked up prior to trial indefinitely.  The report cites an official Egyptian government figure of 7,389 people in pre-trial custody at the end of 2014.  While pre-trial detention limits range from six months for misdemeanors to two years in cases involving crimes against a person, in September 2013, an amendment to the Criminal Code of Procedure allowed for unlimited renewals of pre-trial detentions for individuals accused of committing crimes punishable by death or life in prison.  According to ANHRI, the amendment means that detainees charged with the broadly-defined crimes of disturbing public security or public order and compromising public freedoms, along with “inciting violence” and “joining an illegal organization” can be kept in custody indefinitely as investigations languish or are never begun. Rights groups have expressed concerns that charges were brought against many detainees with insufficient or no evidence.

The report notes that some detainees were kept in custody for long periods without charge, while others were effectively disappeared. It cites Amnesty International research last year that between thirty and as many as 400 civilians were being held in secret at a military facility in Ismailia without being charged, referred to court, or given access to lawyers or families.

Egyptian police stations, prisons, and other detention centers were overflowing in 2014.  The report states that detainees faced “harsh” conditions including overcrowding, abuse, lack of basic medical services, and widespread abuse by security officials.  The problem became so grave that even Egypt’s National Council for Human Rights (NCHR), a cautious, quasi-governmental body, criticized the use of pre-trial detentions and stated that holding cells at police stations were filled to 400 percent capacity and prisons to 160 percent capacity. A pretrial detention facility has since been established, with a capacity of up to 4,000 people.

Torture, a systemic problem under the regime of former president Hosni Mubarak, returned with a vengeance in 2014.  The report bluntly states: “reported techniques were beatings with fists, whips, rifle butts, and other objects; electric shocks; sexual assault; and forcing detainees to crawl on broken glass.”

The report cites the Forensic Medical Authority’s confirmation that at least ninety people died in prisons and detention centers from January to November 2014. The El Nadeem Center for Rehabilitation of Victims of Violence, a well-known Egyptian human rights organization, documented 100 deaths in custody in 2014 as a result of torture, untreated health conditions, or brutal prison conditions.  The Egyptian Commission for Rights and Freedoms, another watchdog group, documented cases of minors being held in “black site” prisons, or secret detention centers notorious for torture.  Egyptian authorities denied the use of torture and insisted that deaths in custody were caused by detainees’ pre-existing health conditions or by “mistakes or transgressions” by security forces.

The report conveys how the post-Morsi climate of impunity became the norm in 2014.  Almost no perpetrators of killings, torture, and sexual violence were held accountable for their actions.  As the report mentions, one prominent example of impunity in 2014 was the acquittal of six police officers accused of killing eighty-three protesters during the 2011 revolution. Lawyers of the defendants reportedly claimed that the Brotherhood was responsible for the killings. According to the Egyptian Initiative for Personal Rights (EIPR), Egypt’s criminal justice system in 2014 “left thousands of victims of gross human rights violations outside the protection of the law while giving carte blanche to the law enforcement establishment to act above the law without any fear of accountability.”

The State Department report highlights the tensions in US policy toward strategically-important countries like Egypt.  On the one hand, the US administration has issued a highly critical, detailed account of Egypt’s human rights record, demonstrating that it is at times willing to speak openly about the authoritarian practices of a leading Arab ally.  Moreover, US officials are on record asserting that repression can exacerbate the very terrorism from which Egypt is suffering.  Speaking about global efforts to confront terrorism, President Barack Obama himself said in February, “When people are oppressed, and human rights are denied…when dissent is silenced, it feeds violent extremism.” On the other hand, this awareness has little material impact on policy right now toward Egypt, which has become even more heavily focused on counterterrorism in recent months as the security situation there, and across the region, worsens.  The United States seems to be betting, against the lessons of the 2011 uprising, that Egypt’s human rights crisis won’t boil over into mass unrest and instability anytime soon.

Amy Hawthorne is a senior fellow at the Rafik Hariri Center for the Middle East at the Atlantic Council.  Elissa Miller is a Program Assistant at the Hariri Center.