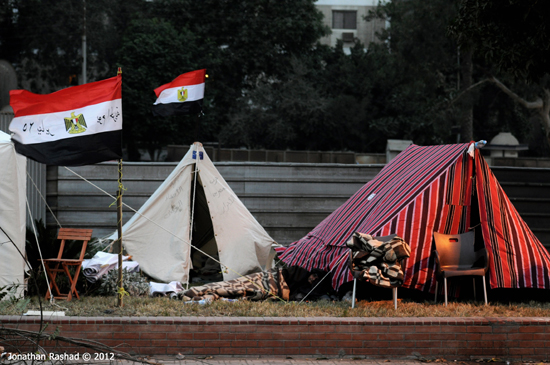 “They are killing Egypt slowly. Strangling it. She is suffocating day by day. Until one day there will be nothing left.” A taxi driver said to me. “Who?”, I asked. “Everyone. The Opposition. The Muslim Brotherhood. Everyone. Morsi is no good. I don’t even think he is calling the shots. But dealing with such a situation should not be like this (referring to the opposition’s strategy, I assume). Tourism is dead. Fuel is scarce. Prices are soaring. And ordinary people, like myself and my family, are suffering.”

The man described the situation in Egypt in a brilliant succinct manner. But will anyone listen?

With Egypt in a constant state of flux: street protests, civil disobedience, unconstitutional decrees, brutal attacks on protesters in the vicinity of the presidential palace, a constitution rammed forward (the same constitution rejected by 57% of the Egyptian capital’s voters), a flailing economy, and complete political polarization, instead of amending the constitution as promised in the “National Dialogue”, Morsi called instead for parliamentary elections. Morsi’s decree was based on an electoral law and the redistribution of voting districts, which the opposition say is designed to give the Brotherhood a significant edge through gerrymandering. They say it also fails to secure guarantees required for free, fair and transparent elections. Today, Egypt’s Administrative Court has thrown a wrench in the parliamentary plans, suspending parliamentary elections and referring the electoral law back to the Supreme Constitutional Court.

At the end of February, Dr. Mohamed ElBaradei, the head of al-Dustor Party and a leader of the National Salvation Front (NSF), called upon Egyptians to boycott the upcoming elections. “I called for a parliamentary elections boycott in 2010 to expose sham democracy. Today, I repeat my call, and will not be part of an act of deception (to Egyptian People),” he said on Twitter. Hamdeen Sabahi, a leader of both the Popular Current Movement and NSF made a similar announcement three days later. The NSF as a whole announced it will boycott elections a few days later on grounds that Morsi has failed to meet the NSF’s demands necessary to guarantee fair elections.

Al-Wafd sources, who spoke on grounds of anonymity, said that the general mood within the party was in support of participating in the elections but that ElBaradei’s pre-emptive announcement placed moral pressure on members to support the boycott. Al-Wafd members from Port Said, which has seen unprecedented violence, with a call for civil disobedience lasting several weeks coming at a high cost of human life, also insisted that al-Wafd must boycott the elections. People from Port Said and several other governorates have gone so far as to launch campaigns, signing affidavits authorizing the military to assume power for another transitional period.

In 2010, in an interview with Michele Dunne, I myself described why I thought the Egyptian opposition should boycott the November 2010 parliamentary elections and later proposed and promoted a mechanism to form a “Parallel Parliament” which the National Association for Change (NAC) enacted just before the revolution. I agree, in principle, that there are instances when boycotting elections is a legitimate act of non-violent resistance, usually practiced when rules of the democratic game do not allow for fair results let alone rotation of power no matter how well-prepared or strongly-supported the opposition may be. But is the Egyptian opposition well-prepared? Is this one of those instances?

What is the NSF betting on? If the presidency pushes forward with the elections “as is”, and the government manages to administer the elections despite protests, attracting a decent voter turnout and winning an overwhelming majority with no need for manipulation or violations, since it would be running almost unopposed, in what position would that leave the opposition? And if the FJP and the presidency acquiesce and accept court-ordered amendments to the law, will the actually NSF run?

The NSF hopes to delegitimize the coming parliament if Islamists run alone. But it is certain that other opposition parties, among them Strong Egypt and al-Ghad al-Thawra, will run. It is also likely that NSF candidates will run as independents. Does the NSF secretly wish for the army to intervene? What if the army chooses not to become embroiled in this mess, especially with the bruises left from the sour experience of the first transitional period, inflicted on it by the very same forces now calling for its return; what would the opposition then do? The army would likely only interfere when things become truly dire and the country is drowned in bloodshed. Is the opposition willing to take that risk? Is it willing to be excluded from the political process for years to come and continue in the discourse of street protests? How much longer before the Egyptian State collapses under this “asymmetric warfare” where the Muslim Brotherhood plays elections and the opposition protests in the streets, and neither side seems willing to agree on a common playground. Such an “asymmetric” conflict undoubtedly could dislocate the limbs of an already bleeding Egyptian State. In January 2011, Egypt’s foreign currency reserves stood at US$37 billion. Since then, hard cash has been depleted month after month, and Egypt must now borrow hard currency to import wheat used to fulfill just half of its demand for bread, as well as buy other imported raw materials and basic commodities. Can Egypt afford another long stretch of protests?

The sentiment in social networks is mixed. For instance, one poll, dominated mainly by activists favored boycotting the elections; Another poll with much wider participation shows a strong intention to participate. Average Egyptians, it seems, think that political forces should settle their disputes through ballot boxes.

Assuming that the army intervenes toppling the Muslim Brothers, what would the response of the group or its Jihadist militant supporters be? Should the opposition risk exposing Egypt to years of violence and even civil war similar to what happened in Algeria when the Salvation Front, ironically with a similar name, won the 1991 elections but the government decided to rerun elections? After such military intervention in Egypt, if any, the opposition must still go through elections, at which point they may be penalized by Egyptian voters for prolonging their suffering.

The Muslim Brotherhood at this moment is at the lowest point of its popularity. A neutral Egyptian Bureaucracy is still almost completely intact, despite the Muslim Brotherhood’s feverish attempts to “Brotherhoodize” it, infiltrating it and controlling its power structures by appointing officials who are blindly loyal to its secret society. This situation will be very different after a few years or even months when the next elections must eventually be run. So, although election guarantees may now seem to favor the Muslim Brothers, things are likely to get much worse with time if they continue to rule alone.

On the other hand, the Muslim Brotherhood is pushing through with a similarly losing bet. Even if the government miraculously manages to run relatively peaceful elections despite wide clashes and violence currently taking place, the absence of the NSF will make the resulting Parliament non-inclusive if not unrepresentative and most likely irrelevant. It will fail to gain the required consensus to introduce reforms and austerity measures needed to save the country from bankruptcy. And when such measures are inevitably introduced they will be met with severe resistance and more protests as Egyptians will naturally hold those in power responsible for their suffering.

Today’s move by the Administrative Court could prove to give both the government and the opposition a chance to step back, and reach true consensus. The Freedom and Justice Party’s official response to the court-ordered suspension is to respect the ruling. However, the presidency announced it would appeal the court’s decision, arguing that election decrees are sovereign acts immune to judicial overview. The possibility of continued judicial and political struggles, and the Brotherhood’s failure to comply with the ruling, could only serve to further delegitimize the coming parliament, as well as the entire regime. So, while each side clings to its position, they both stand to lose in the long term, while the country braces itself for the worst.

Wael Nawara, an Egyptian writer and strategist, and has been active at the intersection of marketing, social media, learning technology and development. He was a co-founder of El Ghad Party (2003) and Secretary General of the Party until April 2011 and a co-founder of the National Association of Change and al-Dostour Party.