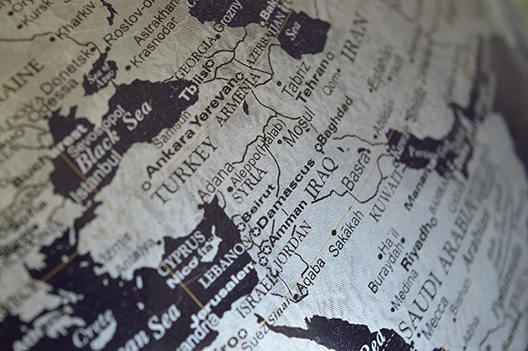 As Hillary Clinton emerges as the presumptive Democratic nominee for the 2016 presidential elections after an endorsement by rival Bernie Sanders, challenges loom ahead, both as policy issues and as strategies that need to be planned for when a potential presidential term begins.

In the wake of the 2011 Arab uprisings, inter-Arab and intraregional politics have evolved. The wave of protests that shook the entire region, albeit to varying degrees in each country, has unleashed a host of tribal, sectarian, and extremist struggles for power across the region. The struggle for power will have to be resolved, extremism defeated, and despotism weakened before democracy can take root.  The United States – along with the rest of the world – is implicated in that struggle.

The US-backed Syrian Democratic Forces (SDF) has been an effective fighting force against ISIS, and, with the proper support, can be an effective force to promote Syrian national unity. It has made significant gains in the strategic Manbij Pocket, which has undermined ISIS’s ability to send supplies and recruits to its key stronghold in Raqqa. By expanding the group beyond its current Kurdish majority to include more Arab fighters on the ground, the United States can encourage its Turkish ally to work with the SDF. The Syrian Kurdish force is currently dominated by the YPG, which Turkey has labeled a terror organization. SDF activity in the Manbij Pocket also serves to support the Turkish goal of closing off the corridor from Turkey into Syria which not only will shut down a smuggling avenue, it would also prevent attacks from ISIS territory on Turkey.

If the US provides financial and arms support to the National Coalition of Syrian Revolutionary and Opposition Forces, contingent on these groups working with the SDF, it can become a central force to be reckoned with. Full Kurdish-Arab unity, which can be achieved through a concerted diplomatic effort from the United States, will be needed for this effort to succeed. This will also require that the United States better support opposition forces against the Assad regime, as well as ISIS, and promote negotiations between Arabs and Kurds to resolve issues of ethnic tension such as reports of Kurds displacing Arabs as well as policies dating back to the days of Hafez al-Assad.

The strength of this force and the full buy-in of Arab forces would allow it to hold the dual role of pushing ISIS out of eastern Syria and holding the line against any further advancement by regime forces from their current defensive positions.

Countering terrorism also needs a nonmilitary arm. A leading reason Syrians have joined extremist groups like the Nusra Front has been the effectiveness of the group in fighting the Syrian regime. A collapsed education system and an abusive state have also left a dangerous gap that groups like ISIS have filled. As a first step, these opposition groups must focus their attention on key areas where extremists dominate, to attract potential recruits away from the extremist organizations. This also applies to a post-conflict Syria.  Creating a democratic environment will isolate extremist groups that insist on using violence to achieve their ends. Groups that work within the democratic system will find themselves reaping the rewards of democracy, such as being able to promote their views freely. In times of peace, the Syrian public has overwhelmingly come out against extremist groups like Nusra, as was seen in Maarat al-Nu’man during the cessation of hostilities.

Iraq:  With a strategy that simultaneously eliminates ISIS from both Syria and Iraq, the US and its allies can avoid the whack-a-mole syndrome. The current strategy in Iraq is already working and has produced results in several Iraqi cities, Fallujah being the most recent. US-trained special forces and the regular armed forces, working with US intel and logistical assistance and a carefully managed role for the Popular Mobilization Forces (PMF), were able to defeat ISIS in the strategic city. If carefully choreographed, and if ISIS lines of supply from across the Syrian border are cut, Mosul could also fall.

The essential follow-up in Iraq is two-fold. If local police forces familiar with the Sunni communities are placed in charge, atrocities towards civilians in the aftermath of victory can be prevented. This will avoid a sense among these Sunni communities that they are being controlled by hostile militias. Reconstruction and assistance to the civilian population is also important. Unless the government in Baghdad makes a concerted effort to reach out to its Sunni population in Iraq’s major cities—by instituting anti-corruption reforms called for from within the Sunni communities and seeing more accountability for PMF forces responsible for sectarian violence—ISIS will return. In liberating Fallujah from ISIS, PMF forces, for example, tortured some Sunni residents, accusing them of being ISIS sympathizers. Some perpetrators have been arrested in a sign that Prime Minister Haider al-Abadi’s government is sending the right message.

Rather than merely offering this advice during a state visit, if the US calls on Iraq to sign a binding agreement, with agreed upon follow-through steps made conditional for the continued receipt of US assistance, the post-conflict phase in Iraq will be more likely to succeed.

Yemen: While the presence of al-Qa’eda in the Arabian Peninsula (AQAP) and ISIS near the Horn of Africa and the entrance to the Red Sea is worthy of US and NATO counterterrorism efforts, when those operations predominantly depend on the use of drones, this is neither a policy, nor a military strategy. Considering Yemen’s tribal communities, drone strikes leading to civilian deaths undermine the very security concerns driving these operations.

On another front, the humanitarian disaster that has befallen the country in the wake of constant warfare for over two years has destroyed essential infrastructure and has left citizens without access to clean water, food, and medicine.  According to the latest figures from the Office of Coordination of Humanitarian Assistance (OCHA), over 14 million Yemenis are food-insecure and that the country’s economy has all but collapsed. If the United States steps in with a plan to coordinate international reconstruction funds it can prove itself a leader in the efforts to end this disaster. In the long term, Yemen’s stability, unity, and democratic and economic development will improve not only the lives of their citizenry but also regional security, and guard against the spread of extremism.

MEPP:  Palestinian-Israeli peace, which for years was the prime source of instability in the region, has again moved to the end of the queue in terms of US and world attention. Its resolution, however, has not lost any urgency or importance to regional and world peace.  Diplomats from 26 countries met in Paris recently to discuss peace in the Middle East, and declared that the Israeli-Palestinian crisis is about to lapse into a permanent state of occupation and violence. They also expressed concern for the conflict being used as tool for recruitment by extremist groups like ISIS. As settlements increase, a two-state solution is becoming increasingly unlikely. In order to avert a prolonged crisis and a more dangerous war, the US together with its European and Gulf allies can bring the two parties back to the negotiation table using trade incentives and potential new peace treaties between Arabs and Israelis in order to bring about a mutually beneficial solution.

The growth of terrorism has forced the US government to back away from supporting democratic transition, an early goal of this administration. Current budget allocations show less support for democracy and more for counterterrorism than was the case in 2010.  The short term risks of terrorism must not replace a longer term approach to security and stability via a more robust support to peaceful democratic transitions in this volatile region.