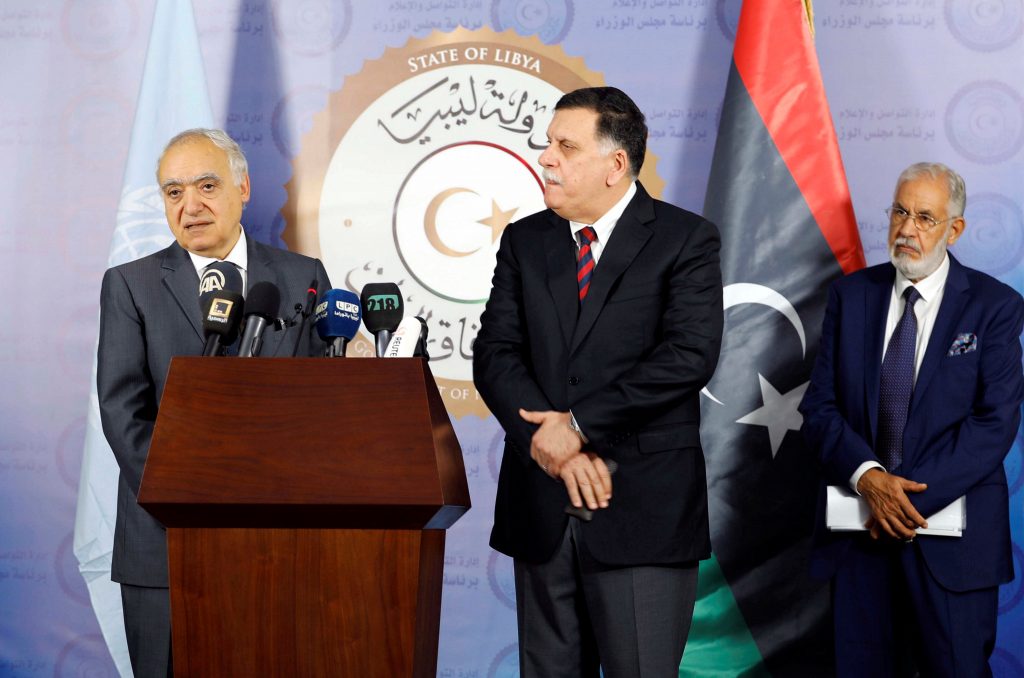 In the ongoing effort by international and domestic actors to solve the political deadlock in Libya, the spotlight is on UN Special Envoy Ghassan Salame. Since the second anniversary of the signing of the Libyan Political Agreement (LPA) in the Moroccan city of Skhirat in December 2015, Salame’s well-thought and defined Action Plan for Libya has morphed into a confused and mainly reactive approach. When discussing his plan with media, Salame oscillates between three different priorities: securing a deal between Libya’s two rival governments to modify the LPA; holding a National Conference as early as June; holding legislative and presidential elections by the end of the year.

Negotiations between the Tobruk-based House of Representatives (HoR) and the High State Council (HSC)—the advisory body to the internationally recognized Government of National Accord—ended unfinished and unsuccessful in October. The HoR, headed by Aguila Saleh since 2014, is blocking conclusion of the negotiations with the HSC, partly due to Salah and his followers’ resolution to remain in a position of power.

General Khalifa Haftar, whose Libyan National Army (LNA) protects and supports the HoR, has also proven to be a stiff opponent to political reconciliation due to his demand to be put as a head of the new, united army without any civilian supervision. Haftar has also more than once expressed his will to gain control of all of Libya through a military takeover. To date Haftar has failed to deliver on these promises. His ability to do so was recently called into question amid unclear and unconfirmed reports of his ill health.

While this eventuality seems to have been dissipated by his return to Libya from a period of hospitalization in France, the issue is far from being resolved. If Haftar relinquished command of the LNA due to an illness, it is possible that the introduction of a different leader could be constructive. Haftar is a personality of extremes: he is either adored or despised. A character more diplomatic and attune to the needs of the country could constitute progress in political negotiations.

While eastern Libya bears much of the blame for spoiling any political deal, individuals on all sides of the conflict continue to profit from their present positions, from the long duration of instability, and are therefore content with the status quo.

Given the partial collapse of Salame’s attempts to date—and those of his three predecessors—a National Conference seems to be the best path forward for Libya. It is an essential rung in Libya’s ladder of success and the country must make an earnest and long-term effort to organize it.

Earlier this year, the UN announced that preparations for a National Conference were well underway, and if realized, a successful conference would be an incredible feat for the country. Previous attempts to conduct a similar forum reveal just how difficult the task can be.

A National Dialogue initiative was conducted under the auspices of then-Libyan Prime Minister Ali Zeidan in 2013. Its purpose— in large part the same as Salame—for the holding of his National Conference is to foment a meeting between stakeholders to re-found the state and finally begin to lay the bases to reconstruct—or rather construct—state institutions.

The organizers of the National Dialogue initiative encountered many difficulties: how to guarantee the security of all participants, which body will convene the conference, and how to safeguard against intimidation by armed groups and the blackmailing or bribing of participants. While that experience was unfortunately cut short by the fall of Zeidan’s government, the many difficulties faced by the organizers of the National Dialogue are still present today. Although these obstacles will be burdensome in the context of deteriorating security and rampant corruption, reasonable negotiation and planning will suffice to tackle such issues. Large security efforts could come through outside funding, ground rules could be established and strictly enforced, watchdog groups could take a front row seat.

Nevertheless, the biggest hurdle of determining who to invite to participate remains. Vetting militias and other actors could be a costly and time-consuming undertaking. The decision to include politicians could, on the one hand, reinforce the legitimacy of the conference’s conclusions. On the other hand, it could turn those excluded into potential spoilers.

A National Conference would allow Libyans to determine the pillars of a future Libyan state. A meeting, or a series of meetings, could be a place to secure consensus on foundational issues, in order to move beyond the conflict. Participants would need to unanimously agree upon, among other things, the refusal of violence as a means to a solution, a functional economic framework, and the type of political system to be adopted by the modern Libyan state.

A new economic contract between the Libyan people and the government could be written, which would include the ownership of Libya’s natural resources by all Libyans themselves. In other words, the government pledges to return, in a form to be discussed and agreed upon, the income from the sale of oil to single citizens and/or municipalities.

At the conference, Libyans could also decide on a type of state system—decentralized, centralized, or federal—and would be called upon to express their opinion on the essential pillars of the state.

The remaining options toward establishing cohesive government and security apparatus in the current context will not be as effective as a conference. The attempt in October to go directly to negotiations to amend the LPA only further publicized the political gridlock. Political tension needs to be handled under a different umbrella before rival parties can come to an agreement on changes to the 2015 agreement.

The options that remain are voting on the constitution and national elections. Holding a referendum on the constitution is not an appealing option for many because the current draft is not sufficient and modifying the draft would take a long time, during which time the security situation would continue to deteriorate  because no national body has a monopoly of power over militias on the ground.

Going directly to elections—avoiding both a National Conference and constitutional referendum—may not make sense academically or pragmatically. It is reasonable to wait until a constitution is adopted to go to elections. However, holding elections could be a remedy to the political apathy of the Libyan population. Many Libyans have lost faith in the political landscape and—due to the security breakdown—are more focused on the safety of their communities than their involvement in national politics.

This detachment of the population from the political elites is also an issue that needs to be tackled. Elections are one of the few tools to effectively draw out participation, proven by the recent enthusiasm around voter registration in Libya. Voter registration increased to 2.5 million in the most recent cycle ending in mid-March, compared to 1.5 million in the 2014 legislative elections of the HoR.

The organization of a National Conference would unfortunately postpone the elections. This could be perceived by the general population as a negative development. The high turn-out in the registration for voters is a clear indicator of the favor with which elections are perceived by the Libyans.

On the other hand, the conference as laid out above also has the potential to engage citizens. Moreover, it could maintain high morale among the population until the situation is better suited for elections, therefore making the entire process more successful.

If Libyans are to reverse the momentum in the conflict, which is heading in the direction of further chaos amid an every-man-for-himself mentality, they will need to bypass the stallers and spoilers who currently have the upper hand. Garnering popular support around a conference could encourage a participatory mindset rather than the survival mode in play now and give Libyans the tool to begin to reverse the negative trends. The process will not be flawless and will not satisfy every person, but Libyans cannot afford for any strategy to go untapped.

Erin Neale is a research assistant at the Rafik Hariri Center at the Atlantic Council. Follow her on Twitter @erinaneale.