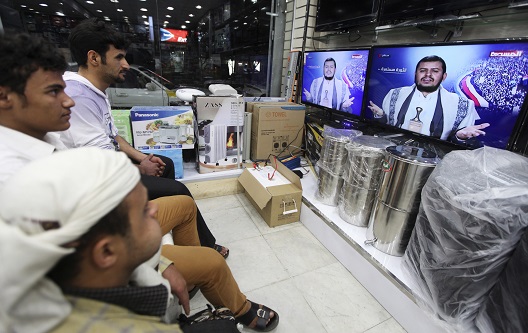 Young, handsome and charismatic, Abdel Malek al-Houthi has taken Yemen and the world by surprise. Leader of a ten-year insurgency against the central government in Sana’a, Abdel Malek has finally arrived, forcing the resignation of President Abdrabbo Mansour Hadi as Houthi fighters surrounded his house, seemingly to show displeasure with his failure to fully comply with their leader’s wishes. In style, substance, and allegiance, Abdel Malek resembles a budding Hassan Nasrallah, thanks to ten years of war instigated by former president Ali Abdullah Saleh and a power vacuum in Sana’a caused by the 2011 uprising against him. The limits of the Houthi ambitions, according to their leader’s own words, are “limitless.” Washington, preoccupied as usual with counterterrorism collaboration with the security services of both Saleh and Hadi, is still trying to decide if what happened in Sana’a on January 22 constitutes a coup or not.

After ten years of war against Sana’a’s heavy-handed and corrupt governing practices, the Houthi’s have finally emerged from the legacy of an underdog fighting oppression to that of a revolutionary force. It defeated Yemen’s central army, against heavy odds in 2010, and again, against lesser odds in 2014, launching a new era in Yemeni, and perhaps regional, politics. As such, the Houthi leadership will likely dominate the coming era, even if they fail to bring security and stability to their troubled country.

The Houthis’ celebration of the Shia holiday of Ashura in November 2014 was a departure from the same celebrations in previous years. Ashura celebrations used to be a quiet, apolitical, and non-sectarian affair in Yemen, celebrated in quiet gatherings and family outings. By contrast, the occasion this time brought together a huge outdoor rally in Saada, the northern capital, where masses of Zaidi followers of Houthi’s Ansar Allah party listened to a Shia-charged speech by their young leader with strong political overtones. The gathering looked and sounded much like the ones organized by Hezbollah in Beirut—from the opening verse of “I seek shelter from the damnable devil,” to the use of the full name of the Prophet, Mohammed Ibn Abdullah, to the orchestrated shouts glorifying Hussein, the first imam of Shia Islam. Ashura in southern Lebanon became a dramatic affair after thousands of Shia migrated from their villages to the southern suburbs of Beirut. By the mid-1980s, Hezbollah reimagined the celebration into a social and political bonding experience, inspiring Lebanese Shia with a new sense of strength, status, and ambition.

Both at the Ashura celebrations in November, and the Friday speech given by Abdel Malek after the September takeover of Sana’a, the young leader sounded and even gestured with his forefinger very much like Hassan Nasrallah, the Secretary General of Hezbollah. In his speech in September, and again on January 21, Abdel Malek made reference to the Paris/Charlie Hebdo attacks, taking a swipe at those who would insult the Prophet Muhammad and humiliate Muslims. He then denounced President Hadi and his son for derailing the implementation of the National Dialogue Conference (NDC), corrupting state institutions, abusing foreign investments, and trying to use the army against the “people’s revolution.” In doing so, Abdel Malek seemed to take a chapter out of Nasrallah’s book, moving from a general religious opening to a comment on international and regional affairs. He then got down to business, pronouncing on specific current events, showing sensitivity to the concerns of all Yemenis (with particular reference to the “legitimate grievances of our brothers in south Yemen”), and praising the army for refusing to be used by the authorities for “foreign power goals and objectives.”

In his outreach to Yemenis of all sects and from all regions, Abdel Malek expressed clear interest in leading Yemen, without limiting himself to the grievances of his own region and his own Zaidi sect. Much like his role model, Hassan Nasrallah, Abdel Malek confidently promised his people victory in their battles and success in rebuilding Yemen. In fact, the Houthi TV channel al-Massirah carries the phrase sidq al-kalimah (the true or credible word) under its logo. Similarly, one of Hassrallah’s slogans has been al-wa’ed al-sadiq (the true or credible promise). Abdel Malek is now increasingly referred to as Sayed, stressing descent from the Prophet via his son in-law Ali, rather than in his tribal title, Sheikh. The Houthi political party also changed its name from al-shabab al-mu’min (Believing Youth), a title adopted in the early 1990s and used throughout the six wars with Sana’a, to Ansar Allah (those with allegiance to God), adopted from a Quranic verse as is the case with their Lebanese counterpart, Hezbollah (party of God).

Iranian assistance and Hezbollah training, both of which began during the war with Saudi Arabia in 2009-2010, increased and began to surface after the departure of Saleh in 2011 and during the Houthi move against Sana’a last year. The takeover of Sana’a had all the markings of Hezbollah’s takeover of west Beirut in 2008, down to the yellow bandanas worn by the fighters as they surrounded the capital in August and September of 2014. As with all comparisons, however, this one also has its limits. The Houthis are quite inexperienced in politics, governance, and involvement in regional affairs. Unlike their Lebanese counterparts, the Houthis have not withdrawn from Sana’a nor do they show any signs of wishing to do so. The Houthis have also pushed south and are now embroiled in fighting with Yemeni tribes in Ma’rib (over the oil and gas fields there), with al-Qaeda in the Arabian Peninsula (AQAP) in Abyan, and with local militias in the large southern urban center of Ta’iz. Despite their friendly rhetoric towards the south, the southern Hirak movement does not appear pleased with the Houthis’ advance in the south and the ouster of Hadi, himself a southerner. The Houthis, deliberately maintaining a low profile on the subject, do not appear to favor southern secession.

The Houthis may be overreaching militarily. In allying themselves with former president Saleh, they have taken on a former enemy and a weary ally—a relationship bound to break in the near future. Their goal may well be to emulate their Lebanese counterpart, allowing a Yemeni representational formula of some sort to prevail, while retaining a dominant influence behind the scenes. But their lack of skill and over-flowing ambition could derail such plans. Should they attempt to move into regional politics too soon, and sell themselves as a tool in Iran’s regional ambitions, they may find themselves—and Yemen—embroiled in a deadly game with Saudi Arabia, the United States (despite its initial hesitation), AQAP, and even ISIS, as regional and international players with a strong interest in defeating them. A new game is afoot and all initial signs point to challenging times for the Houthis with potentially devastating consequences for the country as a whole.