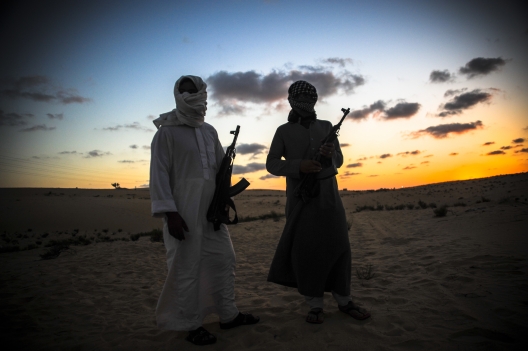 Recent developments in Sinai have once again raised the specter of a “tribal awakening” to rid the region of jihadists. Talk in recent years of armed tribal action against jihadists is not new and has generally gone nowhere, but a number of dynamics may make this moment different. Ansar Bayt al-Maqdis, (ABM), an Islamic State (ISIS or ISIL) affiliate seems to have overreached and some families belonging to a major tribe, the Tarabin, are urging mobilization. These families seem motivated by a fear that their economic interests may be threatened by ABM, and thus believe they have a bone in the fight. This presents a unique opportunity for the Egyptian military. If it fails to on it, the army risks further alienating tribes who have stuck their necks out and even the possibility that ABM takes over these “collaborators” lands.

There is good reason to be skeptical of the military’s capacity to adopt such new tactics with its outdated doctrine still based on conventional warfare. As unlikely as it may be, however, their continued inability to weed out the militants may—one would hope—force them to consider options outside the box. Besides ending scorched earth tactics and the government providing better services to locals, Egyptian authorities would benefit from considering recent tribal proposals to use local volunteers for reconnaissance with military units. Such a step presents its own set of challenges, but if successful, integrating these volunteers into a Bedouin reconnaissance unit may be a long-term security solution for the region’s problems.

An unusual sequence of events led to this moment. Last month, a group of leaders belonging to the Tarabin tribe issued a fiery statement vowing to fight the jihadists. The Tarabin are one of the largest tribes in the Sinai with a reputation for being fierce, since their territory covers parts of the infamous mount Halal, long believed to be a hideout for fugitives and hub for illicit activities far beyond the government’s reach. But the fact that many of the signatories live mostly in Cairo rather Sinai made the statement seem less credible.

One prominent signatory, Ibrahim al-Arjani, is a pro-government businessman who lives in a well-to-do Cairo neighborhood, and at first blush we interpreted the statement like many others as a self-serving stunt by a known loyalist to flaunt his patriotism. Some speculated that the government may have been behind it, but there is no evidence to support this. In fact, al-Arjani has been embroiled in a personal conflict with the militant group. Before releasing the April statement, ABM reportedly threatened his family and stole one of his cars in retaliation for anti-ABM comments he made at the March economic summit.

Things took a turn when ABM reacted swiftly to the April statement and distributed flyers threatening army collaborators with execution. They blew up al-Arjani’s house. When a man from Tarabin refused to hand out the ABM flyer and drove off deliberately kicking up sand in the face of the militants, they went to his house and killed him. The meaningless murder angered many and, what started as a war of words, turned bloody. Another allegation by some Tarabin figures that jihadists kidnapped, raped, and then beheaded a woman for the crime of collaborating with the army could further sow resentment, as targeting women is a grave offense in Bedouin culture.

But why would these tribal figures willingly aggravate ABM and put themselves on its hit list? They would likely say patriotism and tribal honor, but there are also economic interests to consider. One man who has tirelessly worked to become the poster child of this would-be tribal awakening is Sheikh Moussa al-Dalh, who despite his title is only in his early 40s. Al-Dalh’s story highlights the complex nature of tribal-state relations in this part of Egypt. He spent many years prior to the revolution on the wrong side of the law and, at times, even as a fugitive hiding out in mount Halal. At one point, he was pacified with a lucrative job as the tribal liaison for a major cement factory owned by business tycoon Hassan Rateb. After a falling out, al-Dalh had no qualms decreeing that Rateb must be killed. Shortly after the revolution, with his freedom secure as the authorities had bigger things to worry about, he organized protests and joined the speaking circuit of Sinai activists sharing wisdom on how the government must develop Sinai and end the repression of the Mubarak days. As early as 2011, he was calling for local government-backed armed units to provide local security, but he was dismissive of the militant threat then.

More importantly, al-Dalh has repeatedly emphasized that the tribe’s anti-ABM statements were driven by the militant group’s alleged encroachment into Tarabin lands, bringing the war deeper into their territory and disrupting economic activity in the region, where many make a living mining and working in a cement factory. ABM is already active on Tarabin turf, which roughly begins south of Sheikh Zuweid and the edges of mount Halal, but the group has reportedly penetrated further south into the mountainous central Sinai. Establishing a solid foothold is no doubt a strategic objective for the jihadists.

The tribes may also be compelled to act to avoid the fate of fellow tribes that have suffered at the hands of ISIS in Syria, if the Sinai franchise attempts to replicate its tactics. In the Levant, the militant group focused heavily on the tribes, exploiting weaknesses, and manipulating clans in order to neutralize threats and take over. ISIS even has an office for tribal affairs. In Ar-Raqqa, for instance, locals interviewed last year explained how the group targeted outcasts and weaker clans and placed them in positions of authority to check the major tribes. When a dispute primarily over oil smuggling with the Shaitat tribe erupted, the group looted their property and according to some estimates massacred more than 900 members.

The ABM threat motivated al-Dalh to push for a meeting of the “Sinai Tribal Federation,” which brings together representatives from some thirty tribes. Following the meeting, which took place in the south of al-Arish in early May, they issued a carefully worded communique clarifying their stance, ostensibly with a nod from the government, which helped secure the meeting. Most noteworthy was their intention to form two volunteer groups, one to gather intelligence and the other to embed with troops for reconnaissance. In return, they asked for the release of prisoners, to be treated as if they were members of the military (that is with respect), and diplomatically asked the state to stop interfering in the selection of tribal leaders.

Secrecy surrounding the list of participating tribes, however, has highlighted a likely lack of consensus at this stage—a source on the ground, who spoke on the condition of anonymity, told EgyptSource, that the meeting was allegedly not as big as the media made it out to be. However, one possible responsible reason for the confidentiality was to avoid intertribal rivalries by not shaming tribes that do not commit volunteers. Although tribes in North Sinai have largely become dysfunctional, no longer conforming to the traditional paradigm of a respected tribal leadership exercising full control over members; tribal identity, and most importantly rivalries remain strong. The current tribal “boundaries” were forged by 19th century wars, and these lines now largely serve to delineate turf for, largely illicit, economic activity. Although Tarabin turf extends to some areas where ABM is present, other tribes’ turf, such as al-Sawarka’s is where most ABM activity occurs. There have already been rumblings of tension—mostly playing out online—of Tarabin taunting Sawraka for not moving against ABM, and the Sawarka concerned that an ancient rival may encroach on their land or economic activity under the pretext of fighting jihadists.

Plans for tribal action against ABM have drawn criticism from both pro- and anti-government forces, who warn of possible pitfalls in mobilizing tribes in the war against jihadists. Anti-government critics, mainly Islamists, overemphasize the likelihood of intertribal conflict as a consequence. Tensions may be likely, but an all-out conflict is far-fetched. These tribes are already armed to the teeth without being supplied by the military, and yet have not waged full-scale war to settle disputes in roughly the past century. These critics also fail to justify their logic that the tribes should remain “neutral” and not be “dragged into this,” when it is well known that many of these militants hail from local tribes and hide in their lands, either with or without their consent. Furthermore, the jihadist militancy intersects with the illegal smuggling activities, of weapons for example, that benefit some members of these tribes, including the Tarabin. On the other end, pro-state nationalists do not wish to accept a role for tribes in their modern Egypt and warn that using them would establish a precedent for creating militias and degrade the state’s monopoly on violence. In an ideal world, they may have a point but their view is divorced from the reality on the ground where the state is weak and the tribes are armed to the teeth with heavy machine guns. Others point to the now failed experiences of similar attempts, particularly the Iraqi awakenings, but there is no room for comparison considering the presence of the US as an occupying force.

The release of some seventy Sinai locals this week seems to be a good-faith sign from the military to curry favor with these tribes. But more is needed to be done. No one disputes that the region is fundamentally in need of development and access to better services to win the support of the locals, but if the security situation does not improve, implementation becomes more difficult.

The military has thus far refrained from officially commenting on the calls for anti-ABM mobilization by tribal figures. In his monthly speech, Sisi seemed to give a nod to cooperation with locals to “restore security and stability in the Sinai” but did not specify if this extended to their proposals for armed action. If the state fails to respond to these calls, those persons could either be killed at the hands of militants, or will settle their disputes with ABM. Another more likely scenario is that without strong military backing and greater tribal consensus it may be that the Tarabin were the ones who overreached and handed ABM the perfect pretext to take over their mountainous territory. All these outcomes would be disastrous for the fight against the jihadists. A long-term security solution would build on the initiative offered by the tribal federation and recruit a volunteer unit of Bedouin trackers to be integrated in the army for reconnaissance purposes and border security. These local units offer the best security for the Sinai’s forbidding desert in a way that the Egyptian military cannot achieve with even the most sophisticated equipment.

Mokhtar Awad is a research associate at the Center for American Progress.

Mostafa Abdou is an Egyptian journalist specializing in Islamist and jihadist groups.