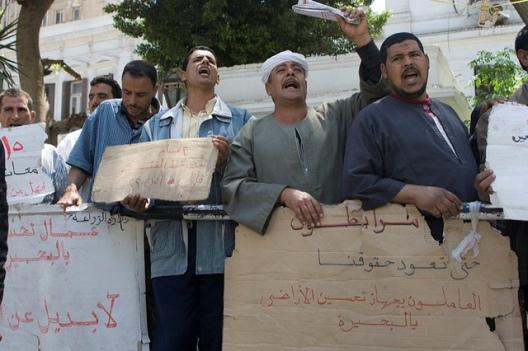 The two consecutive regimes that ran Egypt from the January 2011 revolution up until July 3, 2013, have a key issue in common: neither seemed to grasp the social, economic, and political essence of the revolution. Whether the Supreme Council of the Armed Forces (SCAF) or the Muslim Brotherhood president, Mohamed Morsi, neither sought to seriously achieve the demands of the January 25 uprising, clearly expressed in the famous slogan of the revolution: “Bread, freedom, social Justice.” Judging by the current state of affairs in Egypt, the interim regime does not seem to have learned from either the Brotherhood or SCAF’s experiences. That is, the more a regime undermines the revolution’s goal, namely social justice, the more likely it is to fail.

The Egyptian army runs a huge economic empire and maintaining it, away from any sort of public scrutiny, requires a high degree of military involvement in the political decision-making process. Retired military officers go on to fill positions within the Egyptian bureaucracy as governors, heads of municipal bodies and chairmen of governmental organizations. A sophisticated and corrupt power relationship has been built around this involvement, and Mubarak’s regime was a guarantor of these relationships.

When the revolution was ignited, military involvement in the ruling equation came under real threat. The logic of any revolution is to destroy established institutions and power relationships, and replace them with new ones. Under the guise of protecting the revolution and achieving its goals, SCAF removed Mubarak from power. This move was motivated by the desire to control the revolution’s outcome and stop the revolutionaries from asking for any changes, beyond the removal of the head of state and high ranking officials from the ruling National Democratic Party.

No serious measures were taken to address the underlying reasons people took to the street, particularly regarding issues of social justice and means in which to provide a better quality of life for people. The military crushed worker strikes, detained workers involved in any kind of activism, put them before military tribunals and refused to adjust the minimum wage rate. The honeymoon between large segments of society and the revolutionaries on one side, and SCAF on the other, did not last long. Egypt witnessed significant protests calling for an end to SCAF rule, and the military police and central security forces responded with brutal violence. Between Maspero, Mohamed Mahmoud Street and the Cabinet clashes, almost 100 people were killed.

The Islamists: Madness of Identity

By the end of 2011, Egypt had elected its first post-revolution parliament. Its first elected president, Mohamed Morsi, came to power by mid-2012. The Muslim Brotherhood and their Islamist allies sought to consolidate their power, not by focusing on the revolution’s goals, but by creating a new imagined conflict over Egypt’s identity, and the role of Islam in ruling the country politically, socially, economically, and culturally. Any debate or divergence of opinions between Islamists and their secular, liberal, or leftist counterparts was always viewed as an attempt to change the long-standing Islamic identity of Egypt, or even as a war against Islam. They used their parliamentary majority not to address social justice issues, but rather focused on censoring cultural activities, including an attempt to to ban ballet in Egypt. They also tried to implement repressive laws that would stifle protests and civil society work, and undermine the judiciary’s authority.

When former president Mohamed Morsi came to power, he made no effort to implement structural changes in the political system.  He sought to win the support of the army and the police, rather than reform the ministry of interior. Meanwhile his fellow Islamists enshrined the privileged status of the military in the constitution. The Morsi regime also made liberal use of repressive media laws inherited from the Mubarak regime, with countless cases brought against Morsi critics, in which they were charged with insulting the president.

Economically, Morsi did not seek to change the neo-liberal policies that Mubarak and SCAF depended on to run the economy. Mubarak-era businessmen, and former members of the dissolved NDP, joined Morsi’s delegation on visits to foreign countries, most significantly during a visit to China. Any activism, particularly within the labor movement, was viewed by the Brotherhood as a conspiracy by the deep state to undermine their rule. Worker strikes were violently dispersed by the police and the military police. The Egyptian Centre for Economic and Social Rights recorded a massive increase in labor and popular protests against the regime’s policies. In 2012, the number of protest and strikes reached more than 3,817, of which 2,700 occurred after Morsi’s election. The regime reacted to this spike in protests with various coercive measures, including “dismissal, suspension, transfers outside or inside headquarters, detention, beatings and lynching, pay cuts, investigation by administrative or general prosecution, threats and terror, assault by thugs at the incitement of business owners, and threatening or actually closing down companies,” according to journalist Wael Gamal.

The Brotherhood and their allies ignored rising anger over the deteriorating economic situation and over the disregard for social justice issues. Less than a year into Morsi’s presidency, the Tamarod Campaign began to collect petitions calling on the president to hold early presidential elections. Under the pressure of millions who took to the streets on June 30, the army, in agreement with liberals and leftist political powers, removed Morsi from power on July 3. A new path towards a democratic transition was announced by General Abdel Fattah al-Sisi, with the head of the constitutional court, Adly Mansour, appointed interim president, and Hazem al-Beblawi, appointed as the new Prime Minister.

It would appear that the new transitional regime, however, has not learned from the lessons of the past two and half years—a simple lesson that says that the revolution aimed to improve the lives of Egyptians socially, economically, and politically. Now a new narrative has replaced the story of social justice, in which the current regime is focused instead on fighting “terrorism,” a slogan which has been gleefully adopted by most Egyptian satellite channels—whether private or government-owned. Talk shows try to sell to people the logic that security comes first, and all else can wait. Thus, workers are not allowed to strike, any sort of political activism is not tolerated, and no economic demands can be met until the security forces rid the nation of the terrorism which threatens Egypt’s stability. In fact, the ministry of justice has drafted a new protest law which, if passed, could have dire consequences on the labor movement and the right to protest which Egyptians acquired after the revolution.

The appointment of Kamal Abu Eitta, a well-known labor activist and founder of the Nasserist Karama Party, as manpower minister was initially seen as a positive sign. He, however, could not escape this new narrative of fighting terrorism. In many interviews since his appointment, he has claimed that worker strikes are being used by political forces, among them the Brotherhood, to pressure the current regime. Even when the police and the army violently dispersed worker strikes in Mahalla, Kafr al-Dawar, and in Suez, Abu Eitta did not condemn these practices, in stark contrast with his stance under the SCAF and Mubarak regimes. Instead, he described the violent dispersal of some strikes as “a necessity to protect the ‘nature’ of the area.”

While Beblawy’s government announced the enforcement of a minimum wage rate in the public sector starting in January 2014, a move which was welcomed by both government officials and political figures, none seem to realize that the ruling regime and its policies still have a long way to go before they achieve any sort of meaningful social justice.  In fact, the minister of finance himself admitted that the minimum wage increase could have “unintended consequences,” including hiked taxes, which could prove detrimental to efforts to achieving social justice.

The issue of social justice cannot be reduced to the enforcement of minimum and maximum wages. Social justice is about enhancing people’s lives, implementing measures that can help the poor, ensure better public services, and enforce rule of law, so that no citizen is humiliated, because they don’t have the authority or power to protect themselves against any abuse of power.

The lesson that no political power in Egypt seems able to grasp is that the more you undermine the social goals of the revolution, the more chance there is of failure and instability. The narratives of protecting the revolution under SCAF, or protecting Egypt’s identity under the Brotherhood and its Islamist allies did not strengthen either regime. The current interim rulers must realize that betting on popular support for a crackdown on Islamists and the need to fight terrorism is no different, and will not last forever. Workers have resumed their struggle for fair wage rates and a better work environment, and if the economic situation continues to deteriorate, other segments of society will likely follow suit. As Hossam Bahgat, the founder and director of the Egyptian Initiative for Personal Rights said, “You can enjoy the honeymoon as long as you can, but the honeymoon will end sooner or later.

Mohamed Elgohari is an Egyptian academic based with varied experience on Arab and Middle Eastern Affairs. He is a recipient of the prestigious Ford Foundation International Fellowship, which provided him with a full scholarship to complete his MA at New York University in Comparative Politics. He worked as a researcher in Cairo for a number of academic institutions. His articles have been published in outlets including Jadaliyya, World Politics Magazine, and World Press. He is currently an intern at the Atlantic Council’s Rafik Hariri Center for the Middle East and a regular contributor to EgyptSource.