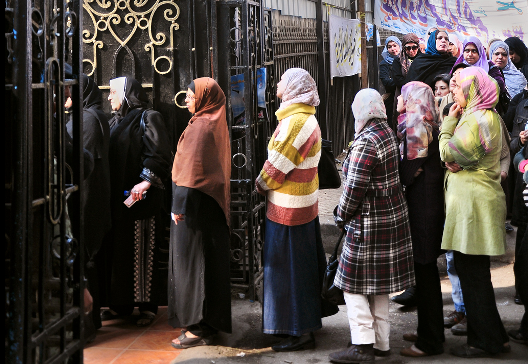 Women, who stood side-by-side with men at the frontlines of Egypt’s uprising facing off with Central Security Forces, have found themselves marginalized over the past two years. Issues relating to women’s rights have been sidelined as discussions over legislation under successive regimes instead focus on measures that would stifle civil society in Egypt, and crack down on street protests. But as women have taken their rightful place alongside men in the struggle for their basic rights, the movement has given way to a discussion about their role in the constitution, legislation and beyond.

As women took part in protests, they often did so at greater risk than their male counterparts. In a heavily patriarchal society, they were singled out and targeted, their bodies used as a weapon against them. There are no two more prominent examples than Samira Ibrahim and the woman known only as ‘the girl in the blue bra.’ Samira Ibrahim rose to prominence as the only woman willing to come forward and publicly accuse the military of performing virginity tests during their rule, while the image of the girl in the blue bra was on the front page of every major newspaper worldwide, laying on the ground as security forces surrounded her and stomped on her chest.

Much has also been said about a systematic targeting of women in Tahrir Square by groups of men sexually harassing women in a way that has led many to believe the attacks are organized. This clear attempt to lead women away from the frontlines has done the opposite. It has opened up a conversation, one that would have been difficult to have just a few years ago.

A once taboo subject has made its way into talk shows and newspapers as the question of sexual harassment, and how to address it has continued to crop up. More importantly, there have been genuine attempts to confront this phenomena, whether in the form of organized protection such as grassroots movements like Tahrir Bodyguard, a group which attempts to fend off harassment and protect women at protests, or HarrassMap, a website which allows women to report sexual harassment incidents. The movement in this space has also led to discussions on an institutional level. Measures combating violence and sexual harassment have been considered. A draft law was being considered under ousted president, Mohamed Morsi’s regime in October 2012, which would have imposed harsher penalties for sexual harassment, but it never saw the light of day. With more women in legislative positions, this may not have been the case.

Representation in the government is a key issue that must be addressed, and with the constitution and electoral law once again in the drafting stages, the question of the Egyptian woman’s place in state institutions must be answered. The current makeup of the constituent assembly, with five women in the fifty member committee was only a marginal improvement on the six women in the 100 member committee in 2012. It was a far cry from the 50 percent called for by some women activists, and as a result women’s rights in the constitution have taken a backseat to other controversial issues: the so-called identity articles, the role of the military, and the system of governance.

Despite drawbacks, Egypt has witnessed a steady increase in female participation in politics over the years. Looking at the voter turnout, it has gone from 16 percent in 1975, to 34 percent in 2004. In 2012, women turned out in force, waiting in line for hours to vote.

Representation in parliament has not had as steady a trajectory, due to the on-again, off-again approach with the use of a gender quota. While critics of the gender quota argue the practice undermines female participation in government, Egypt’s current political situation clearly calls for the use of quotas. It gives women the chance to get their foot in the door, and can be used as a means of raising social awareness, as well as demonstrating women’s ability to take a leading role in governance.

Women earned the right to participate in the Egyptian parliament in 1956, where they occupied anywhere between 0.5 to 2.4 percent of the seats until the introduction of a gender quota in 1979. Thirty seats were designated to female members of parliament, leading to a modest jump to 8 to 9 percent of the seats until 1986, when the quota was abolished. From 1986 until 2010, women’s participation in parliament continued to decline until the reintroduction of the quota – this time with sixty-eight seats set aside for women, allowing them to make up 12 percent of the parliament – the highest its ever been.

Quotas have been used elsewhere in the Middle East with even better results. In Morocco a sixty seat quota for women has seen them account for 17 percent of the parliament, while in Iraq a 25 percent quota has been fulfilled. Looking at other countries in transition, Egypt also lags behind them. In Tunisia and Libya, they dropped the use of a quota and opted instead for another electoral system that favors equal representation. Both countries adopted a closed-list zipper system – alternating between women and men candidates on the lists. Consequently women fared far better, with Tunisian women accounting for 27 percent of the parliament, and Libyan women accounting for 17 percent of the General National Congress.

During Egypt’s last parliamentary elections, the then-ruling Supreme Council of the Armed Forces not only abolished the women’s quota, they also used a proportional list system for two thirds of the candidates. While all parties and coalitions had to include women on their lists, they did not stipulate where women should appear on the lists. As a result, women, more often than not, were placed at the end, decreasing their chances of earning a parliamentary seat. Women running on party lists in the 2012 parliamentary elections accounted for only 6.15 percent of the candidates vying for two thirds of the seats. Women competing as individual candidates accounted for 30.6 percent, vying for only one third of the seats. With the numbers already stacked against them, out of the 376 women who ran for seats, only eight women, representing 2 percent of the parliament, were elected. Half of them belonged to conservative Islamist parties and toed a party line that was clearly not in favor of advancing women rights.

In the ongoing conversation within the constituent assembly surrounding the electoral system, the body appears to be leaning towards single member districts – and historically in other countries – women have not fared well. It is to be expected that if this were to be applied in Egypt – it will likely have a detrimental effect on female participation in parliament.

Women in the constituent assembly have pushed for the reinstatement of a gender quota in parliament. While this issue has yet to be resolved, the assembly appears to have reached consensus over a women’s quota of 25 percent in local municipality elections, but the last local municipality elections were held in 2008. This has been received with some optimism that it may also translate into a quota for Egypt’s parliament, but the constituent assembly has seen significant controversy over not only the introduction of a 30 percent women’s quota, but over whether or not to maintain the 50 percent farmer/worker quota.

Beyond the question of legislative representation, looking at the article dealing specifically with women’s rights in the amended constitution, Article 11, states that the “state ensures protection and care for motherhood and childhood, the reconciliation between the duties of a woman toward her family and her work in the society, and a status equal to man in political, social, cultural, and economic areas of life without prejudice to the principles of Islamic Sharia.” The article preceding it defines family as “the basis of society and is based on religion, morality, and patriotism.”

Women’s rights in the amended constitution are limited by stating that a woman is equal to man, in accordance only with Islamic Sharia, and are painted in a framework of her duties to her family, and as a mother. The article does not stray far from the 2012 constitution drafted by an Islamist-dominated body, maintaining the vague wording that confines women’s rights to a patriarchal definition.

Away from the pages of dated and tired legislation, Egyptian women have been at the forefront of significant grassroots and youth movements – Mona Seif has been a leading voice for No to MIlitary Trials movement, while Ragia Omran has worked tirelessly within the legal system as a human rights lawyer, securing the release of countless activists and protesters arrested by security forces. These are just two examples of many. As its political scene continues to mature, albeit slowly whether among men or women, at the very least, Egypt has begun to build a new generation of men and women who can be part of a more coherent, stable and democratic nation.

There is no better place to start with increased women’s participation than with the constitution and electoral laws. Enshrining women’s rights in these legislative documents is the first step towards increasing social awareness of women’s rights.