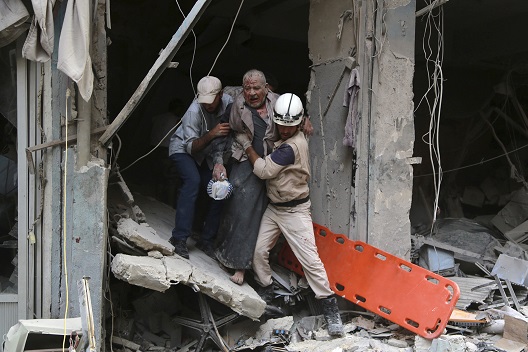 As President Barack Obama considers whether to provide forceful assistance to the Syrian democratic resistance forces, one of the last pillars of hope for Syria is dangerously close to falling. My city, Aleppo, just thirty-five miles from Turkey, is the largest city in Syria and it is currently under threat from both the Islamic State in Iraq and al-Sham (ISIS, or the Islamic State) and the Assad regime. The city has 7000 years of history and serves as a symbolic center for Syria and the entire Middle East. For the last several years, it has hosted the Syrian resistance, which seeks a real democratic transition and political reform. As the city falls under siege, so does the living spark of the free Syrian resistance.

As president of the Free Aleppo Governorate Council, I have worked with the United States and European countries to facilitate the delivery of tons of food and supplies when our people needed them dearly, but wheat and clothing cannot save us any longer. Our Council formed a police force with the help of the West as we struggled to restore law and order, but the influx of bombs and extremists threatens one of the last bastions of moderate civil life. We fight to maintain electricity, water, waste management, medical services, and resources to meet the needs of free Syrians—many of whom have lost so much in the violence. But now, the violence threatens to consume us all. An Assad siege and ISIS invasion can wash away our years of work to preserve Aleppo’s dignity. If the United States continues its current hands-off approach, Aleppo will be lost, and our dream of democratic political progress and stability in Syria may very well be lost with it.

Over the past three years, the Free Syrian Army (FSA) helped us defend Aleppo from constant attacks from ISIS and Assad. Thus far, we have held terrorist and regime forces at bay, despite Bashar al-Assad’s relentless barrel bomb attacks and air strikes on civilian areas. While trapped civilians suffer daily bombardments, both ISIS in the northern countryside and the Syrian Army in the south and west of the city squeeze FSA battalions. The telltale signs of an Assad siege have emerged. His forces take steps to cut off supply chains and terrorize the population with bombings. Meanwhile, ISIS advances into our countryside, forcing FSA soldiers to respond to hold strategic areas. Residents take to the streets, begging the FSA to remain in their villages, save their lives, and protect them from ISIS’s signature mass murder, torture, and brutal rape. We have sacrificed much in our fight against these common enemies; we need your help. Our brothers in Deir Ezzor came to the Obama administration with this same warning and call for help several months ago. Unanswered, ISIS invaded their region and established a stronghold in the East, using it to stage attacks on Iraq. ISIS committed countless atrocities in Deir Ezzor since then, including a recent slaughter of 700 people, mostly women and children, belonging to the al-Sheitaat tribe who dared resist ISIS occupation.

The fall of Aleppo would precipitate a series of catastrophic events in Syria, further tipping the scales in favor of Assad’s forces and the expansion of ISIS. Without air support and weapons from the United States, we stand little chance to prevent this collapse and sustain our city as a beacon for Syrians engaged in the two-front conflict against both terrorists and the regime.

The first step to a strategic partnership with the Syrian resistance for the United States is to help us save Aleppo. The Pentagon and CIA already know which groups they can work with, and President Obama already conveyed a willingness to provide more support. Despite the fact the ISIS is better equipped, better paid, and better fed than us, our moderate brigades in Syria have killed more ISIS soldiers than any other armed group in Iraq or Syria. We have a safety network that ISIS will never have: the support of our local population and our unwavering commitment to protect them. But we need help to keep Aleppo alive. In order to achieve this strategic goal, the United States, Turkey, and other willing states should immediately establish a NATO-enforced no fly zone covering Aleppo and the neighboring Idlib province, with a focus on securing Aleppo city and protecting humanitarian supply chains across the Turkish border.

The United States should also provide sufficient heavy military and logistical aid to vetted resistance forces to enable them to defend the city and take the offensive against Assad and ISIS. Only then can Free Syrian forces begin facilitating the return of our displaced civilians, under the protection of air support. As our refugees return, we would welcome the transfer of the Syrian Interim Government from Turkey into northern Syria, setting the stage for legitimate governance and the start of a true political transition. The United States could then help turn the tide by implementing longer-term scalable initiatives to arm and equip vetted resistance forces throughout Syria. This plan would ultimately include arming 50,000 fighters operating in Free Syrian Army battalions. Such support would have a strategic impact on the battlefield in defeating al-Qaeda and ISIS, and force Assad to accept a political arrangement.

A strong showing of strategically significant Western support to our Syrian resistance would not only create battlefield gains, it would reinvigorate free Syrians everywhere and spark an expansion in our recruitment of fighters to defeat ISIS and Assad. We do not want to be ruled by brutal Islamists any more than we want to be ruled by a ruthless dictator. Provided with military support, we can succeed in our ongoing fight against both. For us, it is victory or death.

Abdulrahman Dadam is the president of the Free Aleppo Governorate Council in Syria. The Council formed in March 2013 to provide services and administrative assistance for civilians living in free areas of Aleppo Province, the most populated region in Syria. Despite regular targeting by the government of Bashar al-Assad, the Council has been effective in facilitating the delivery of much needed aid and services to civilian populations. Mr. Dadam has also served as a representative of Aleppo province in dealings with foreign governments, aid providers, and the Syrian political opposition.