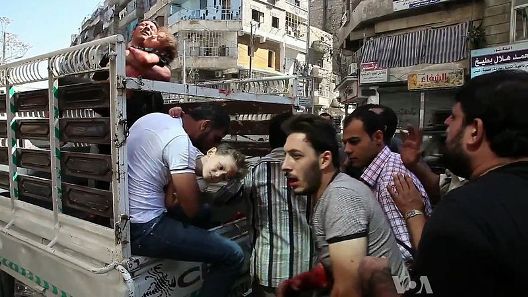 Last month, China and Russia predictably vetoed a French UN Security Council proposal to refer Syria to the International Criminal Court (ICC). Without Syria’s ratification of the Rome Statute, the Security Council is the only body that can refer investigation of the conflict to the ICC. Although this window has effectively closed, other options exist to hold accountable the perpetrators of the gross human rights violations that have occurred in Syria over the past three years.

In the spring of 2012 at Syracuse University College of Law, Professor David Crane began a new course, which would become the Syrian Accountability Project (SAP). Professor Crane is a former Chief Prosecutor for the Special Court in Sierra Leone, the tribunal which held former Liberian President Charles Taylor responsible for war crimes. The task of the students in that course was to connect news reports, social media documentation (viewing pictures on Twitter and watching videos on YouTube was perhaps the most difficult task), and other data to attempt to corroborate claims and create a comprehensive narrative of the Syrian Civil War, from the beginning to contemporary accounts. The goal was accountability: the SAP sought to identify individuals who either commanded or performed major acts of violence. Next, the SAP sought to match each entry in its database with applicable law to identify possible violations of international humanitarian law or the Syrian penal code.

Since then, the international community’s attention toward Syria has waned. Nonetheless, the Syrian people continue to languish in one of the most devastating and thoroughly documented man-made tragedy in our lifetime. The world at large has done nothing to seek justice for Syria.

The SAP nonetheless continued these efforts over the past two years, bringing on other esteemed international jurists and organizations to consider the legal options for transitional justice once the widespread violence ends. Last year this group released the Chautauqua Blueprint, a draft statute for a Syrian tribunal for the prosecution of human rights atrocity crimes. The document is much like a legal Mad Lib, allowing specific decisions to be made at a later time. The drafters of this document understand first-hand the glacial pace of international bureaucracies and internal negotiations when creating transitional justice mechanisms. As such, they attempt to help provide a key structural framework to accelerate the process in any way, because justice delayed is justice denied.

At the release of the document, the drafters acknowledged that the political context needed for such a transitional justice mechanism might not materialize anytime soon—or perhaps ever. Religious extremism, the Saudi Arabia-Iran regional rivalry, and the US-Russia international rivalry have exacerbated the conflict, made unlikely a diplomatic resolution, and prevented international intervention, respectively. That same political context has kept the conflict going for three years, with no hope to curb the massive loss of home and life, and has now prevented the ICC from gaining jurisdiction over the country.

Previously, ICC prosecutor Fatou Bensouda stated she would support a special tribunal for Syria if the ICC was not granted jurisdiction over the conflict. This option is not without critics, however: the International Criminal Tribunal for Rwanda and the International Criminal Tribunal for the former Yugoslavia were hugely expensive endeavors that give pause to many when discussing transitional justice. However, the structures recommended in the Chautauqua Blueprint more closely resemble the Special Court in Sierra Leone, which was one of the least expensive ad hoc tribunals to date. The international community also now has greater experience in creating and managing a variety of ad hoc trials, allowing for the implementation of best practices and a more efficient justice institution.

Any transitional justice mechanism for Syria cannot begin functionality until a majority of the violence has ended and either a peace is brokered or a side is vanquished; sovereignty dictates that those in power must accept such a judicial mechanism. Any such structure would benefit from the incorporation of the Syrian penal code under the principle of complementarity and charge the gravest crimes against humanity as representative of the acts that have been occurring throughout the Syrian Civil War. A formal transitional justice institution should also complement an iteration of a truth commission which would concentrate on restorative justice for victims. Most importantly, a tribunal for Syria must be able to seek the justice which the Syrian people want. The Chautauqua Blueprint is an example of just that structure.

Last week the international community again failed the Syrian people by not submitting the country to the jurisdiction of the ICC. The world has been unable or unwilling to stop the violence and now appears unwilling or unable to hold the perpetrators of that violence accountable. An ad hoc criminal tribunal for Syria, however, can still help bring justice to a people that have been victimized for so long. It is, quite honestly, the least we can do.