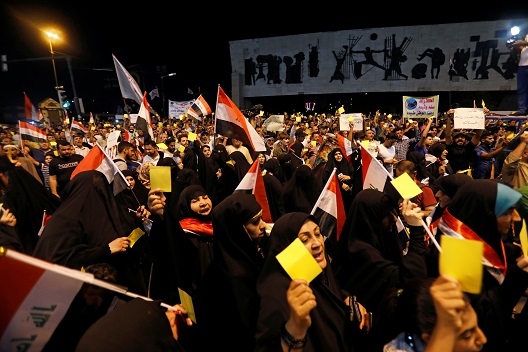 Since 2003, the principle of multi-party consensus has defined Iraq’s political system. This formula was deemed best for Iraq during a transition period, and it relied on the existence of broad sectarian and ethnic coalitions. In practice, this consensus represented the major Shia and Kurdish political parties while Sunnis fit into the mold as best they could or were left out. Though consensus rule certainly gave a wider group of political actors a stake in the system, it also blurred the lines of responsibility and made accountability impossible. Cracks are now emerging in the consensus model, with coalitions fragmenting and a historic step in Iraq’s democratic transition: the appearance of an opposition party.

The 2018 election was the beginning of the disruption of the consensus rule formula. Despite efforts by Iran, no overarching Shia coalition formed either before or after the elections. Instead, two Shia-dominated coalitions were eventually formed: Al-Islah, led by Muqtada Sadr’s Sa’iroon bloc, and Binaa’, led by Hadi Al-Amiri’s Fatah bloc, both of which included smaller Shia and Sunni parties. Consequently, the selection of Adil Abdul-Mahdi as prime minister did not emerge from a grand Shia coalition, as in previous elections, but from a transactional agreement between Sadr and Al-Amiri.

The fragmentation of the Shia was mirrored in the Sunni and Kurdish camps, resulting in a fractured parliament and the loss of the consensus model that previous governments relied upon. Traditionally, the prime minister held the majority together by distributing choice posts in the ministries. In the current government, there are too many groups and not enough posts to satisfy everyone. The government now is faced with the prospect of a summer of discontent, with scorching heat and demonstrations that may lead to violence as they did last year. On June 14, Ayatollah Ali Sistani, the leading Shia Marja’ in Najaf, issued his most searing criticism yet of the state of affairs in Iraq.

Against this background, Al-Hikma, the political group led by Ammar Al-Hakim, officially declared itself on June 16 a “constructive opposition” and withdrew from the Islah party. Allegedly, Iranian emissaries tried to dissuade Al-Hikma from taking this step to preserve the appearance of Shia solidarity behind the prime minister. The move is unprecedented in Iraqi politics: perhaps not since the demise of the monarchy in 1958 has there been a formal opposition. It is a bold tactic that carries risks, but if it succeeds it may change Iraq’s political system.

Al-Hikma is not the only dissenter, though it is the only one on the front lines. The Nasr Alliance—also within the Islah coalition and headed by former prime minister Haider Al-Abadi—has been voicing its discontent for some time. On June 13, before Al-Hikma made its formal declaration, and before Sistani’s speech, Nasr announced itself in opposition, albeit informally, stating that it supports a “corrective” stance and backs Al-Hikma’s move. The backbone of the Islah coalition, Sadr’s Sa’iroon, is an important participant in the government yet also fiercely critical.

In my meetings with senior members of Al-Hikma and Nasr in Baghdad in June 2019, both groups stressed that they are a “loyal opposition,” and that their purpose is to reform the government. Al-Hikma promises to exercise vigorous oversight in parliament, hold the government accountable, and fight corruption. For this purpose, Al-Hikma is contemplating establishing a British-style “shadow government,” with sufficient resources and designated teams to track and scrutinize the performance of specific ministries.

Why an Opposition Now?

Both Al-Hikma and Nasr say that they wanted to give Prime Minister Abdul-Mahdi plenty of time to succeed; they did not wish to be seen as spoilers. Eight months into Abdul-Mahdi’s government, they feel that time is running out and course “correction” is due.

Other factors are at play too. The distribution of the most senior posts in the government is almost complete, and Al-Hikma and Nasr believe they did not get their fair share. Demonstrations against poor services in the south are gathering momentum, and both Al-Hikma and Nasr want to be seen as siding with the protesters. Senior Al-Hikma officials believe that since they have not been given a meaningful role in the government, there is no reason why they should share in the blame for the government’s shortcomings. At a personal level, Al-Hikma probably feels disappointed by Abdul-Mahdi: though he maintained his independence, he was regarded as being closer to the Al-Hakim family than to other Shia factions, and there is a sense that he has failed them.

In the longer term, being in open opposition is pre-positioning for the provincial elections due to take place in the spring of 2020. Although these are often dismissed as less important than parliamentary elections, they are in fact a significant determinant of policy direction and resource distribution.

The Challenges Facing the New Opposition

Scrutiny of government performance by a formal opposition is a worthy and necessary goal, but it may be hard to achieve, and it carries risks. An opposition needs a platform that distinguishes it from the incumbent government. Al-Hikma and Nasr voted for the current prime minister’s four-year program, presented in late October 2018, so now they can only hold him accountable for performance.

This is difficult to do: data on government performance is not necessarily accurate, transparent, or publicly available. The prime minister’s office recently issued a report announcing that it has achieved 79 percent of its six-month goals, yet this claim is challenging to verify. Corruption is so systemic and pervasive that it is hard for an opposition group to address except in general terms. Moreover, because members of Al-Hikma and Nasr participate in the government, albeit at lower levels, their denunciation of corruption can sound insincere.

The biggest obstacle facing a formal opposition is numbers. Al-Hikma has at best twenty seats out of the 329 seats in parliament. If no other group joins them, Al-Hikma will be out in the cold with little possibility of garnering support for any serious oversight effort. Given the promises it has made to the public, failure may damage its prospects in the provincial elections and doom any further attempts at forming a viable opposition. At a tactical level, Al-Hikma officials believe there is sufficient latent opposition in parliament to enable them to form majorities (or coalitions) on specific issues. Indeed, it is possible that others, such as Nasr, will join Al-Hikma in some situations. Nevertheless, unless another major group declares its opposition, the step taken by Al-Hikma is a gamble.

Al-Hikma, Nasr, and any other group that wishes to exercise the role of formal opposition must demonstrate to the public that they are serious and effective. If the creation of an opposition succeeds, it will transform Iraqi politics and could lead to greater accountability. But the chances for success are far from certain.

Rend al-Rahim is a former ambassador of Iraq to the United States. She is the co-founder and president of the Iraq Foundation and is a member of the Atlantic Council Iraq Initiative’s Advisory Committee.

Image: Photo: Supporters of Iraqi Shi'ite cleric Moqtada al-Sadr hold a yellow card which means the last warning, during a protest against the poor performance of parliament and government in Baghdad, Iraq, June 21, 2019. REUTERS/Khalid al-Mousily