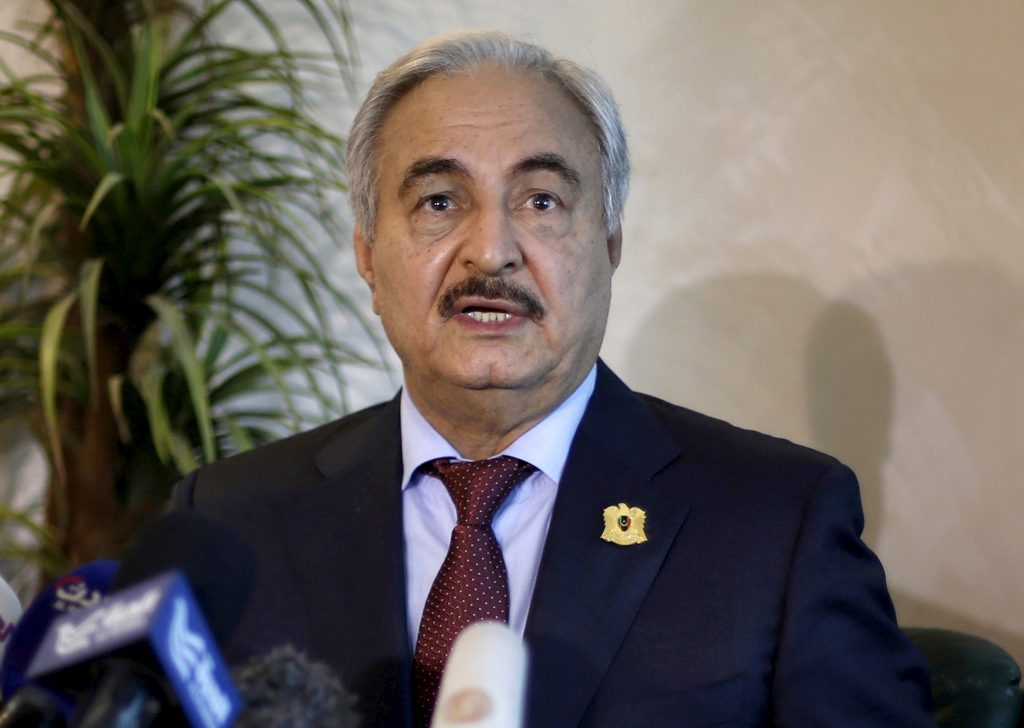 As the situation in Libya increasingly declines, and in the aftermath of the election of Donald Trump at President of the United States, Libya experts are considering new ideas for US policy in Libya. One idea is for the international community to abandon its effort to create a Libyan unity government in line with the December 2015 Skhirat agreement and instead lend support to a stronger party that could better ensure the rapid stabilization of the country. In other words, it would mean shifting support from the Presidential Council (PC) and Government of National Accord (GNA) of Fayez Serraj to the Libyan National Army (LNA) of Khalifa Haftar. Is this feasible? Is it desirable?

US and European policies are stalled between declared support for Serraj, the product of 18 months of negotiations between Libya’s various conflict parties led by the UN, and the realization that the efforts and resources invested in Serraj’s government are not producing the desired results. Its authority is still limited to parts of Tripoli, and support within the population is rapidly diminishing. Many commentators have even gone as far as declaring the entire Libyan Political Agreement (LPA) produced in Skhirat as failed. Western capitals see the impasse and thus have begun to search for an alternative that would allow for an exit.

The forces that theoretically pledged support for Serraj are divided among themselves and often in open conflict with one another. Establishing a clear configuration of forces in this chaos that can operate in a way allowing the PC to function effectively and with the appearance of independence is difficult. This lack of independence makes it improbable that antagonistic forces in the east will recognize the PC. Therefore, the PC, in the actual conditions in which it finds itself, stands little to no chance of expanding its role in the country and successfully facing its adversaries. In contrast, the forces led by General Khalifa Haftar, which are hostile to the PC and aligned with the eastern House of Representatives, are becoming militarily and politically stronger.

Thus, some ask, if Haftar’s influence increases and reaches the point where he could project his power to the western province all the way to Tripoli, then wouldn’t it be wiser for the United States and its European allies to join him and support his campaign?

Shifting to Haftar could involve several steps. Lifting of the UN arms embargo would allow the LNA to acquire heavier weapons and equipment, which would further empower it to launch attacks on opposing forces in the west. Allowing Haftar to sell oil from the eastern terminals and cash the revenues would further bolster the strength of his forces, allowing the LNA to coerce its opponents into surrendering. Haftar could also be supported in forcing Serraj to accept a deal in which he would formally recognize Serraj’s government in exchange for receiving full command of all Libyan armed forces and becoming the de facto ruler of the country. The last option in particular could allow the international community to save face, as it would effectively guarantee all power to Haftar without requiring the formal withdrawal of support from Serraj’s government.

Would such a decision be politically savvy for the international community and positive for the Libyan population? To answer this question, one has to examine a complicated international scenario. European, American, and regional actors combine to weave a complex policy tapestry.

A Regional and International Impact

The European countries have all pledged allegiance to the PC/GNA but have, in reality, behaved ambiguously. Both France and the United Kingdom have in fact provided military support to Haftar’s forces indirectly by supplying training and advisers and directly by employing their special forces on the ground to help LNA fighters. Italy has been coherent in its support for Serraj and the PC, but rumors abound about possible rapprochement with Haftar. High level Italian officials have spoken in public about the need for Haftar to be part of the solution in Libya.

The United States, through declarations in support of Serraj and aerial support to the Misratan troops fighting the Islamic State in Sirte, has been coherent in its support for the PC both in word and deed. However, the change of administration casts doubts on the continuation of this support given the seeming preference of the president-elect for strongmen and their presumed capacity to impose stability on volatile environments.

The main regional actors—Egypt, Tunisia, and Algeria—while directly impacted by events and conditions in Libya, do not have a common position.

For Tunisia, disorder at its border with Libya is a constant threat that risks destabilizing its fragile transition to democracy. Tunisian leadership has expressed support for the PC and opposes any foreign intervention in Libya. Tunisia has also tried to act as mediator between competing Libyan factions. Algeria is in a similar position, given the fragility of its political moment owing to the issue of the succession to the ailing President, Abdelaziz Bouteflika. Algiers supports Serraj’s presidency and has inserted itself in the negotiation process by hosting meetings and roundtables to facilitate an agreement between the various Libyan factions. Algiers is also strongly opposed to foreign intervention in Libya, not only by the United States and Europe, but also by other regional actors such as Egypt.

The Egyptian position is more nuanced. Motivated by its opposition to Islamist movements and fearful of disorder on its doorstep, the Egyptian leadership is hedging its bets. On the one hand, Cairo has expressed support for the UN-led negotiation process. However, at the same time it has bolstered Haftar as a means to establish order in Libya’s eastern province and secure the shared border. The Egyptian army’s full and effective support for Haftar’s forces has guaranteed them a constant supply of weapons and the rapid training of troops. Strategic advice and operational support from Egypt has allowed them to rapidly seize major oil terminals, push back against jihadists in Benghazi, and reach a level of parity with the militias of Misrata–Serraj’s main supporters. The massive and direct involvement of Egypt in the Libyan theatre has undermined the negotiation process by allowing Haftar to believe that a military victory on the ground is an achievable objective.

In this framework, a change of policy by the United States and its European allies in favor of Haftar’s bid for power would be received well by Egypt, but could undermine the situation in Algeria and Tunisia. In Algeria, for which the geopolitical equilibrium in North Africa has been a central foreign policy pillar, the result of Egypt’s predominance in Libya would be considered a failure for the ruling elite and could create high-level tensions, which in such a delicate moment could easily escalate and undermine the stability of the country. The same scenario could be applied to Tunisia, where the Islamist party Ennahda is very strong and would not react positively to the victory of a staunch anti-Islamist leader such as Haftar.

Other international actors also have a stake in the evolution of the Libyan situation. Turkey and Qatar would like to see the success of their allies, namely the Muslim Brotherhood and some minor Islamist groups. This would be viewed by the United Arab Emirates, which has openly expressed support for Haftar’s anti-Islamism, as the worst possible outcome. Russia, in its historical quest for a foothold in the Mediterranean region, sees an opportunity in Libya to reach this objective. Haftar has gone to Moscow for help and has received encouraging expressions of support from the Russian leadership. Rumors of an agreement to facilitate the opening of a Russian military base in the east of Libya are probably unfounded or at least premature, but the possibility of such an eventuality is enough to worry the United States and could become an important consideration in a potential rapprochement with Haftar.

What would be the domestic consequences of a shift in US and European allegiance from the GNA to the commander of the LNA? An empowered and more secure Haftar could decide to undertake direct negotiations with his main opponents in Misrata and other cities in the west to reach a consensus on his role and overall policy. If successful in this endeavor, the road to Tripoli and national leadership would be open, with only minor opposition from radical Islamist groups expected.

The kind of regime that would be put in place in this case is unclear, but judging by the militarization of eastern Libya under Haftar’s control through the appointment of military officials as mayors of major cities, it would not be surprising to see the same applied to the country as a whole.

If, on the other hand, direct negotiations were to fail and opposition to Haftar’s hegemonic plans succeeds, the country could be divided into two or more zones of influence or, worse, an all-out war between the LNA and its western opponents could emerge with devastating consequences for the population.

The idea that the United States and Europe, by switching their allegiance and support to Haftar, could resolve the deadlocked situation in Libya positively and peacefully may be overly optimistic. The external, as well as the domestic, situation in Libya is so intricate and delicate that abruptly trying to alter it may do more harm than good.

It would probably be better to continue to support the PC/GNA, work to address dysfunction within the LPA, and provide more effective support to the PC. One way to do this would be to present a new cabinet to the HoR for approval that would be composed of heavyweights that could bring real ground-based strength and influence to the PC/GNA. Such a cabinet would be more effective in bringing consensus and operative capabilities to the governance of the country. This does not mean in any way closing the door to Haftar. On the contrary, by showing coherence, consistency, and cohesiveness of purpose and intent, the United States and its European allies could be more effective in helping General Haftar understand that the best outcome for him and for Libya lies in reaching a negotiated power sharing agreement and a consensual political-economic way forward that could decisively reverse the country’s negative trajectory and put it on a pathway toward unity and prosperity.  For outsiders the advice is simple: measure accurately and often before cutting.