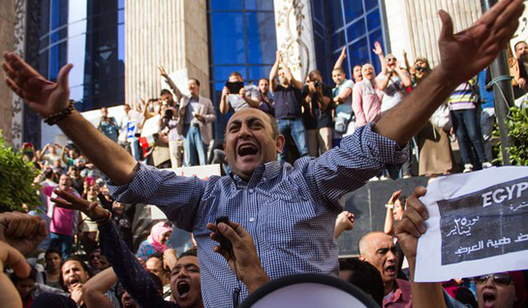 Egypt’s opposition was dealt a heavy blow early this week after several courts sentenced 152 protesters, arrested on April 25, to two to five years in prison. They were detained for demonstrating against the maritime border agreement signed by Egypt and Saudi Arabia in early April, ceding Cairo’s sovereignty over the two strategic Red Sea islands of Tiran and Sanafir to Riyadh. The defendants were also charged with joining an unnamed illegal organization, seeking to overthrow the regime, spreading disorder, and spreading false rumors to harm the country’s national interests.

While those opposed to the agreement were able to hold a large peaceful protest in which a few thousands took part on April 15 in front of the Press Syndicate, the Interior Ministry issued several statements confirming that any planned street protests on April 25 would be met with a decisive response. A report in independent daily Al-Shorouk also claimed that President Abdel Fattah al-Sisi was critical of the Interior Ministry’s handling of the April 15 protests, allowing thousands to gather, and that a repeat was not to be seen. The Presidency issued a statement denying the Shorouk report, but the ministry nonetheless took serious measures to prevent the protests from taking place, and those who did take part were swiftly sentenced 19 days after their arrest.

On May 14, the Qasr al-Nil Court sentenced 51 of the protesters, mostly young men, to two years in prison. Of the defendants, nineteen had been released on bail pending trial, while the rest remained in detention. Their Lawyer Mukhtar Mounir told MENASource he was “astonished” at the speed in which the court issued the sentences for a large number of defendants, after just two sessions.

A few hours later on the same day, also during the second session and after nearly 10 hours of deliberations, another court in Giza sentenced 101 protesters to five years in prison, with 79 of them facing an additional hefty fine of EGP 100,000 (around $10,000) each. Of the 101 protesters, 54 were sentenced in absentia. The court tried the defendants under Egypt’s terror law because they were charged with blocking roads and disrupting law and order, lawyer Mounir explained.

Dozens of other protesters are also still on trial on the same charges of illegally protesting on April 25.  There are at least three other cases in which a total of nearly 100 other defendants are facing similar charges, and are awaiting sentences. On Tuesday, the Abdin Court adjourned its trial of 52 defendants until May 31, and two more trials are ongoing in Giza and Boulaq.

“We have never requested a permit to hold street protests because we believe the Protest Law violates the Constitution,” Mustafa Hagar, a member of April 6 Democratic Front Movement told MENASource. “But we also never saw courts sentencing university and school students to two and five years jail for protesting peacefully in the streets. There wasn’t any violence whatsoever reported on April 25,” he added.

While lawyers will appeal all sentences issued against the defendants, opposition groups—mostly small leftist, Arab nationalist and liberal parties—have argued that the real aim of the government was to silence any dissent, particularly against the agreement signed with Saudi Arabia.

Several others were rounded up in the days after the planned protest, and are facing the same serious charges of seeking to overthrow the regime, spreading rumors and false information, harming national interest, and spreading disorder. Among them are prominent lawyer and activist, Malek Adly, and two journalists, Amr Badr and Mahmoud Saka, whose arrest at the headquarters of the Press Syndicate on May 1 has led to an ongoing confrontation between the press and the Interior Ministry. The three are part of a case before the Shubra Al-Kheima Court in northern Cairo, together with six other defendants.

Members of the troupe, Atfal Shawara (Street Children), which posts satirical skits online, were also arrested last week. The group records its ‘selfie’ skits on their mobile phones, prompting other activists to launch a campaign calling for their release by taking selfies, with the hashtag: “Does the mobile phone camera terrify you?” Satirical commentator, Bassem Youssef also released a video calling for their release.

All six members of the group were arrested, with the youngest member, Ezz Khaled, 20, released on EGP 10,000 bail pending trial. Prosecutors ordered the imprisonment of the five remaining members for 15 days. While the group, which was formed earlier this year, started out addressing mainly social issues, they had become increasingly political, publishing videos critical of the government and its supporters, including a video on the agreement with Saudi Arabia. They are all facing charges of forming an illegal organization seeking to overthrow the regime. These charges are punishable by life imprisonment, or the death penalty if acts of violence are involved, according to Amr Imam, a lawyer and member of the defense team representing the many detainees arrested over the past month after the signing of the maritime border agreement between Egypt and Saudi Arabia.

Adding to the list of activists sent to prison this week, prominent activist Sanaa Seif turned herself in to police to serve a six-month jail term on May 14. She was sentenced on charges of insulting a public official, for refusing to respond during questioning in an investigation related to inciting protests against the agreement with Saudi Arabia. She reportedly refused to answer the prosecutor’s questions, saying, “I don’t believe you are independent and you receive your order from executive bodies.” Seif spent over a year in jail after she was arrested in June 2014 while taking part in a small demonstration opposing the Protest Law, and was among those released by presidential pardon last October. Her brother, Alaa Abdel Fattah, is serving a five-year jail term, also for violating the Protest Law.

Hala Foda, of the Egyptian Social Democratic Party and coordinator of the Front in Defense of Freedoms, which includes other liberal and leftist parties as well as human rights organizations, told MENASource, “The regime wants to distract us from opposing the agreement signed with Saudi Arabia, and make us busy with running after the young protesters who have been arrested or sentenced to prison terms.” She said the financial resources of most parties have been drained in paying hundreds of thousands of Egyptian pounds to bail out those by prosecutors pending trials. “But we will not give up. We will appeal the sentences, fight against the Tiran and Sanafir agreement by all legal means, and try to pressure the parliament to amend the Protest Law and to refuse the deal with Saudi Arabia,” Foda said.

A group of lawyers, including former presidential candidate Ali, filed a case on April 10 against the government for signing the deal with Saudi Arabia without prior approval of the parliament and without first informing the public. During the first session of the trial on May 17, Ali told judges that the agreement violated article 151 of the Constitution that outlawed ceding any part of Egypt’s territory. After listening to arguments by lawyers, including government lawyers who claimed the agreement with Saudi was an act of sovereignty that violated no laws, Chief Judge, Yehia Dakrouri, adjourned the case to June 7.

“President Abdel Fattah al-Sisi said in public statements that Egyptians should no longer speak about the agreement signed with Saudi Arabia, and that the final decision was in the hands of the parliament when they vote on the issue,” Maasoum Marzouk, a former diplomat and prominent figure in the Popular Current Party, said at a press conference held at the headquarters of the Karama Party on Tuesday. He added, “As citizens who vote for this parliament, we have the right to tell our deputies how to vote, whether by signing petitions or holding peaceful protests. Depriving us from such rights clearly violates the constitution and the basic right on freedom of expression.”