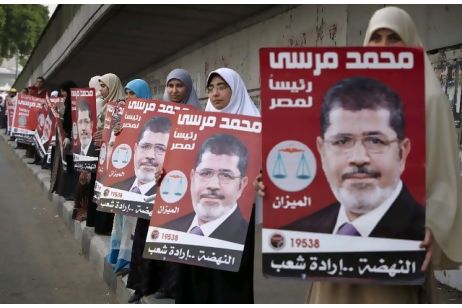 There has been a rather stunning reversal of fortunes over the last week in the coming presidential race.  Amr Moussa and Abdel Moneim Aboul Fotouh, the two candidates considered front runners for some time now, seem to have lost ground due partly to their televised debate on May 10.  The other and probably more important reason is that they are being eclipsed by two candidates with far more substantial support networks:  Freedom and Justice Party (FJP) President Mohammed Morsy, backed by the Muslim Brotherhood, and former military officer Ahmad Shafiq, backed by the remnants of the Mubarak regime.

Shafiq’s sudden rise in popularity is the big news in the last few days, although perhaps it should not be a surprise in view of the fact that the SCAF leadership reportedly does not care for the idea of a mere diplomat (former Foreign Minister Amr Moussa) telling them what to do.  Political activists and journalists have told me that all of a sudden former members of the ruling party are pushing Shafiq’s candidacy assertively; so far it is unclear whether they are doing so under instructions or have simply understood without being told that he, as the only viable military candidate, is their man.  It astonishes me that Egyptians could have forgotten so quickly what a catastrophe Shafiq was during his brief tenure as prime minister (January 29-March 4, 2011). Who could forget, for example, the disastrous live talk show on Egyptian television on March 3, when an apparently inebriated Shafiq lost his temper in response to tough questions from prominent author Alaa al-Aswany, leading to Shafiq’s resignation the following day?

But whether deserving or not, Shafiq claims to offer one thing that is in short supply today in Egypt:  security.  He is reportedly drawing on support from several quarters: Egyptians tired of the political and economic instability since Mubarak’s fall, wealthy business people eager to re-establish the pre-uprising order, and Christians fearful of Islamist domination.  Most of the Christian vote—potentially 5 out of 54 million voters—had been likely to go to Moussa until recently.  But according to MP Emad Gad of the Social Democratic Party, many Christians found Moussa “unconvincing” in the May 10 debate and fear he would be more willing to compromise with an Islamist-dominated parliament than they would like.  Shafiq, who has refused to participate in debates (a wise move) reportly takes a satisfyingly tough line against Islamists in private.

Islamists, revolutionaries, and many liberals, on the other hand, grow visibly alarmed at the prospect of a Shafiq victory.  “If Shafiq wins, it will be a disaster; expect to see the parliament dissolved by court order within six months,” one Brotherhood activist predicted.  “If Shafiq wins, revolutionaries will go back into the streets; we didn’t watch our friends get killed for this,” said a young secular activist.  A liberal MP, in a more somber mood, muttered “we haven’t gone through all this for the past 18 months to end up with a president like Shafiq.”  An ugly confrontation on May 19 between Shafiq supporters and Egypt Air employees accusing him of corruption during his tenure as Minister of Civil Aviation gave a taste of things possibly to come.

Just as controversial is the prospect of victory by FJP candidate Mohammed Morsy, which some Brotherhood and non-Islamist observers believe could even happen in the first round on May 23-24 (you read it here first).  While I wondered a few weeks ago whether the Brothers really had the will to elect Morsy—who, after all, was their second choice after Khairat al-Shater was disqualified—it is now clear that they are completely in earnest. The Brotherhood organizational machine has now fully engaged on behalf of Morsy, as illustrated graphically by the 470-mile long human chain constructed from Cairo to Aswan on May 17 to support his candidacy.  Morsy appears to have picked up some supporters who left Aboul Fotouh after the latter performed poorly in the May 10 debate, but clearly the Brotherhood organizational capacity is his major asset and it is not to be underestimated.  In the March 2011 referendum and Nov 2011-Jan 2012 parliamentary elections, Brotherhood organization proved to be decisive (Salafi organization was also impressive, but the Salafis no longer have their own horse in this race).

Egyptians are eagerly watching the returns of early voting by expatriates in the Gulf States, in which voting preferences are considered to reflect what is likely to happen inside Egypt; Morsy and Aboul Fotouh are showing strongly.  For many Egyptians, the possibility of a runoff between Morsy and Shafiq is a bit of a nightmare, as it would polarize the country between an Islamist and secularist candidate.  For the Brotherhood, a Morsy-Aboul Fotouh runoff would be even more uncomfortable, pitting a Brotherhood-sanctioned but largely unpopular FJP candidate against a renegade son who is more charismatic and no longer controllable by the Brotherhood.