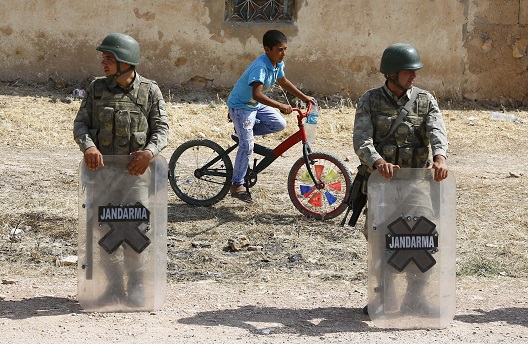 In recent weeks, Syrian Kurdish fighters made substantial territorial gains in northern Syria, along the Turkish border. Although these victories have come at the expense of the Islamic State (ISIS or ISIL, which Turkey increasingly sees as a threat), they have fueled Turkish concerns over the emergence of a de-facto Kurdish state on its border, and the subsequent weakening of Turkish-backed anti-Assad insurgent groups. It is increasingly possible that Turkey will take unilateral military action to establish a safe zone in northern Syria.

The United States has indirectly opposed the idea, most probably over concerns that Turkey, a NATO member, will become bogged down trying to maintain a safe zone in northern Syria and call for international support against any number of potential rivals including ISIS, Kurdish forces, or the regime. The United States can use this latest crisis to establish a broader, more productive approach with Turkey toward ISIS and the Syrian conflict. At the very least, it can work with both Turkey and the Syrian Kurds to help ensure neither sides’ critical interests are violated.

Turkey sees Kurdish advances in northern Syria as a national security threat as they raise the possibility of a Kurdish-controlled corridor stretching across most of the Syrian-Turkish border. The Syrian Kurds, led by the Democratic Union Party (PYD), have links to the Kurdistan Workers’ party (PKK)—an insurgent group that since 1984 has fought an intermittent insurgency for greater political and cultural autonomy against Turkey.

By capturing the ISIS-controlled border town of Tal Abyad, the PYD’s military arm, the People’s Protection Units (YPG), united the Kurdish cantons of Kobani (northern Syria) and Jazeera (northeast Syria). This conquest secured a critical YPG supply line, allowing it to move people, weapons, and supplies westwards from its northeast stronghold. Thus, the PYD can now try to link and unite the Kurdish cantons along Turkey’s border. Indeed, it has since indicated it intends to push towards the remaining Kurdish canton of Afrin in northwestern Syria, which would require capturing still more border areas and critical ISIS-held cities in Aleppo province.

Turkish policymakers are also concerned about indirect US support for the YPG. Since the US-enabled Kurdish victory at Kobane in September-October 2014, YPG fighters provided battlefield information to a US staffed military planning office in Erbil, Iraq, then relayed to coalition aircraft operating against ISIS in Syria. This has raised Turkish concerns that the United States supports the establishment of a Kurdish corridor in Syria, which Turkey deems an unacceptable security threat.

In addition to concerns about an emerging Kurdish corridor, especially absent a clear US policy statement on Syrian Kurdish goals, Turkey worries that a US-backed YPG could threaten critical Turkish overland, cross-border supply routes to allied Syrian insurgent groups in Aleppo province. For example, since January 2014, a collection of nationalist, Salafi, and jihadist groups controlled the town of Azaz. It since came under renewed threat from ISIS, which sought to retake its former stronghold in early June. A successful YPG offensive against ISIS could displace and pressure it to target areas held by insurgents allied with Turkey. Alternatively, these ISIS held-territories could fall to the YPG at the insurgents’ expense, as could critical border towns and supply lines. Either scenario would play out at the expense of Turkish-supported Syrian insurgent groups.

Turkey cannot accept the collapse of its anti-Assad insurgent allies. It argues that ISIS and Assad have a strategic cooperation agreement against the Syrian insurgents. The YPG, Turkey argues, is also working at cross-purposes with those same insurgents (as described above), thereby aiding Assad. Turkey therefore believes the United States is undercutting its rebel allies by supporting the YPG, thereby empowering the regime, which itself is sustaining ISIS.

While Turkish-backed rebels have battled ISIS inside Syria, Turkey has prioritized overthrowing the regime. This explains its inconsistent approach to ISIS, but Turkey appears increasingly ready to take more definitive action against the group, both in Turkey and possibly through a ground offensive against ISIS strongholds in Syria. This increased focus on ISIS does help narrow the gap between the United States and Ankara, even as the two sides remain sharply at odds over the means and goals of the coalition’s war on ISIS in Syria.

Sending Turkish forces to Syria would carry high political risks. It could derail the AKP’s effort to form a government after recently losing its parliamentary majority, triggering new elections and political instability. However, a ground campaign could both push ISIS back from Turkey’s border and prevent its replacement by a contiguous Kurdish enclave stretching west to Afrin. Such a policy would reflect worst-case scenario thinking in Turkey and continued friction with the United States about a US-led military effort that has focused exclusively on targeting ISIS and not the Syrian regime, as Turkey would prefer. However, this policy would also aim to address Turkey’s security interests—as they pertain to ISIS, the PYD, and the broader trajectory of the Syrian conflict.

Yet, despite substantial US-Turkish disagreements, a broader Turkish-US strategic agreement in Syria is possible—one in which Turkey feels less compelled to take unilateral action in the fractured, perilous northern landscape of the Syrian war. The most transformative shift would be a joint US-Turkish military effort to fight ISIS directly and through allied insurgent and Kurdish groups in Syria. This would target ISIS (a US and, increasingly, a Turkish priority) and addresses Turkey’s interests in the insurgency and fighting the regime. Such a significant shift in US strategy seems unlikely, however, and might not deliver results quickly enough to defuse this latest crisis.

Instead, the most prudent short-term approach would entail the United States using its outreach to and leverage over its tactical Kurdish allies to compel them to respect Turkey’s red lines, including preserving the security of key insurgent supply routes and refraining from taking action or making statements supporting Kurdish independence in northern Syria. In return, Turkey would be counted on to rein in its allied rebels, most of which are opposed to the PYD.

The Kurds have emerged as an important player in the Syrian civil war and stand poised to control substantial terrain and natural resources in northern Syria. As a de-facto US ally in the war against ISIS and the most powerful Kurdish actor in northern Syria, the PYD has stressed that their political demands be taken into account in any post-Assad Syria. The United States should consider these demands, while respecting the interests of Turkey and its Syrian allies.

The United States, Turkey, and Syrian Kurds have all voiced their commitment to Syria’s territorial integrity. The Turkish and Kurdish positions lie far apart, but with the United States in a position to broker a broader understanding, it could help forestall a Turkish intervention in Syria, and perhaps ease—if ever so slightly—Turkish-Kurdish tensions along a volatile border.