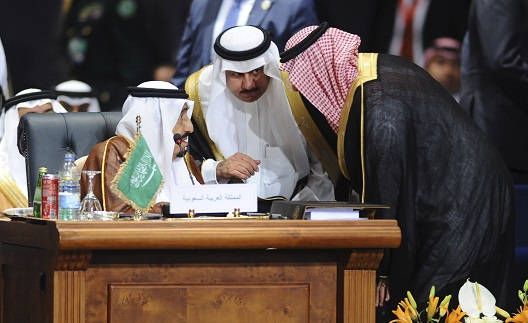 In an Atlantic Council report and subsequent article in The National Interest, my colleagues Barry Pavel and Bilal Saab at the Brent Scowcroft Center of the Atlantic Council have made a case for a formal alliance with US security partners in the Gulf. In brief, they contend that an agreement on Iran’s nuclear future, if concluded, would induce the Gulf states to “compete much more aggressively” with Iran, thus introducing increased instability to the region and endangering key US interests. I believe the notion of a mutual defense treaty with Gulf states is premature and problematic, and mistakes the need to pursue somewhat narrow shared security interests with the broader interest of a mutual defense treaty centered around protection of a shared set of values found in the political systems of all parties.

Pavel and Saab note in their article that a treaty with Gulf partners “could likely be opposed by some in the US Congress whose concerns about some Arab Gulf countries’ human-rights records trump their security concerns.” This characterization implies individual freedom issues must be addressed at the expense of security interests, but it also misses a more fundamental point about values: we and the Gulf start from a very different place. We should not only be “concerned” about human rights, but we should think long and hard about the wisdom of formal long-term defense ties with family monarchies. The United States was founded on the notion that monarchy is a bad idea, not only because monarchies have a tendency to put human rights on the lower end of their priorities, but because they are inherently unstable.

When the rules of the game in a country are determined by the power of single royal families, the rules change according to their needs, not according to any notion of a transparent system of rule of law. While many experts found the recent succession in Saudi Arabia rather uneventful when it actually happened, they had fretted for years about the instability that could be introduced when the Saud family feud began to replace the late Saudi king. And rightly so: not even Saudi citizens have any significant insight into the machinations that produce their own leaders, their policies, or even their government’s quotidian priorities. And we have no real way of knowing whether we are in the final or the early chapters of the latest fight for power in Saudi Arabia, particularly because one branch of the Saud family seems to have made a concerted effort to marginalize another.

The Lessons of Iran

Another example is worth recalling from the other side of the Persian or Arabian (or whatever you want to call it) Gulf. For over thirty years, the United States invested very heavily in its relationship with the Shah of Iran and vice versa. Iran was the single largest purchaser of US arms in 1978 and had a military force rivaling many European countries. Iran was the protector of US interests against Soviet expansion and served as a check on Gulf states hostile to Israel. Would a mutual defense treaty with Iran at the time of the Shah’s internal difficulties and subsequent expulsion somehow have protected American interests in the region or would it have drawn the us into a domestic fight that would have further poisoned what had already become a toxic relationship precisely because of our installation of the Shah and subsequent support? In a treaty scenario, had the Shah been able to convince Washington that the threat to him was orchestrated from the outside, the US may well have felt compelled to defend his regime to the end. The success of the Iranian Revolution was certainly not a good thing for US interests, but there was virtually no one in Washington in 1979 that thought American soldiers should die to save the Shah. And although signs were present, almost nobody predicted the Shah’s overthrow.

One-family rule can last a long time, can be moderately progressive in its social and economic policies, and can appear from the outside to be quite modern, but, absent reforming itself into a constitutional monarchy, the end almost always comes suddenly and unpredictably. This fundamental fault line in monarchies and one-family rule, be they benevolent or not, effectively precludes durable foreign and defense arrangements, and in the case of the Gulf, such a formal treaty could further damage US long-term interests. What would a defense treaty with these Gulf royal families signal to those who still look to the United States as a country that values individual liberty, the ability to choose one’s leaders at all political levels, and the right to express one’s views freely? It would say: “Forget about it. What we really care about it is military power.” If there is one lesson from our experience in Iran, it is that putting all your eggs in one basket can lead to very damaging consequences.

People Power is a Real Thing

Rather than putting our energy into formalizing what is already a very robust set of military arrangements, the United States needs to work a lot harder at finding ways to be at the side of the citizens of the Middle East, and not rely only on a group of families that came to power through accidents of colonial history. If we believe in our own American ideals and values, we will believe that the people will eventually prevail in the Middle East. Regardless of our security issues, we cannot put Arabs and Iranians in some expedient category of people that do not merit participatory democracy, or who are simply unprepared to pursue it. The people of the Middle East may not always prevail in ways that we find appealing and there will be no guarantees that their crippled civil societies will be up to fostering truly representative political systems in the near future. But, at the bare minimum, we have an obligation to do no harm to the emergence of systems that share our values. I believe a US treaty with Gulf partners, reinforcing a set of values that we do not share, is unnecessary and would do harm.

Richard LeBaron is a retired career diplomat and a Non-Resident Fellow at the Scowcroft and the Hariri Centers of the Atlantic Council.

Image: Saudi King Salman (L) speaks with his delegations during the opening meeting of the Arab Summit in Sharm el-Sheikh, March 2015. (Reuters)