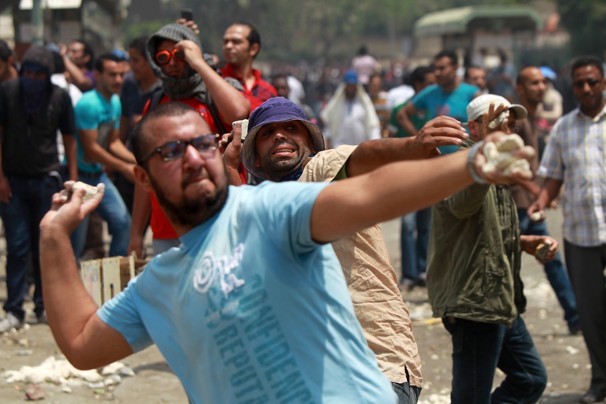 A microbus was moving slowly down Ramses Street in downtown Cairo due to the clashes in Abassiya Square between angry youth and military police near the Ministry of Defense. On the bus, a female passenger expressed her anger about the return of violence. The woman did not know who was killing whom, or what was the cause; all she knew was that the country was not gaining anything from this disturbance but ruin.

Over the past three days (since May 2), Egypt has seen a new round of violence and protests resulting from the military’s insistence on conducting elections in accordance with procedures that raise concerns about the integrity of the upcoming presidential election scheduled for May 23 and 24.

The events began in the early hours of the morning on May 2, when around two hundred protesters – most of them supporters of the disqualified Salafi presidential candidate Hazem Saleh Abu Ismail who objected to their candidates’ exclusion from the race and other measures related to the administration of elections – were surprised by thugs who appeared intent on opening fire, which lead to the outbreak of clashes in which eleven people were killed and 168 more injured, according to official statistics.

Following the events, a number of youth movements coalesced to organize a mass march in solidarity with the protesters in Abbassiya. The protest continued in Tahrir Square on Friday, May 4 at the urging of political forces, but a number of youth groups led by the April 6 Movement decided to demonstrate in front of the Defense Ministry despite the military’s warning against encroaching on state property. When confronted by military police, the youth responded throwing stones, prompting the police to retaliate with water cannons and tear gas. At least 370 people have been injured in the clashes so far.

The demands put forward by protesters — an immediate transfer of power to civilians and the amendment of Article 28 of the interim constitution just three weeks before the presidential election — are viewed by an increasingly skeptical public as unrealistic, prompting many to sympathize with the SCAF.

The most obvious result of the events has been to distract attention from the presidential election, as the media has been entirely preoccupied with covering the violence for the past few days.  All of the Islamist and revolutionary presidential candidates have temporarily suspended their campaigns, while only the two candidates associated with the former regime, Amr Moussa and Ahmed Shafiq, remain on the campaign trail.

These violent events are not the first of their kind. Before the parliamentary elections, police attacked around 200 protesters in Tahrir Square provoking the infamous clashes that became known as the incident at Mohamed Mahmoud Street near the Cabinet building, which left dozens dead and hundreds injured. These events pulled the spotlight away from the impending parliamentary elections, during which Islamist parties committed extensive electoral violations, including exceeding limits on campaign spending and the illegal use of religious slogans. This instigation of sectarianism aided the Islamists in their electoral victory.

Some believe that the provocation of the angry youth is aimed at dragging the country into deeper instability to postpone the presidential election and with it the transfer of power beyond the scheduled deadline at the end of June. During the press conference held by members of the SCAF on the day following the violence, a large banner was hanging behind the three SCAF representatives with the words, “The Armed Forces Are Committed to Their Promise.” During the conference, General Mohamed al-Assar vowed, “The presidential election will be 100 percent fair,” yet political forces still have doubts.

There are two possible scenarios that could arise from the latest violence in Cairo. First, there is the possibility for an escalation of protests that will intensify pressure on the SCAF to respond to the demands they have raised, foremost among them the amendment of Article 28 of the interim constitution, which bars appeals to decisions made by the Supreme Presidential Election Commission (SPEC). In the second scenario, limited protests may persist, resulting in the disruption of the presidential election and portray revolutionary and Islamist forces as instigators of chaos seeking to perpetuate the state of instability that a majority of Egyptians are tired of, and would like to bring to an end. Eagerness to end the transitional period with elections will favor the candidates affiliated with the former regime, who will benefit from the public’s desire for the restoration of normalcy.