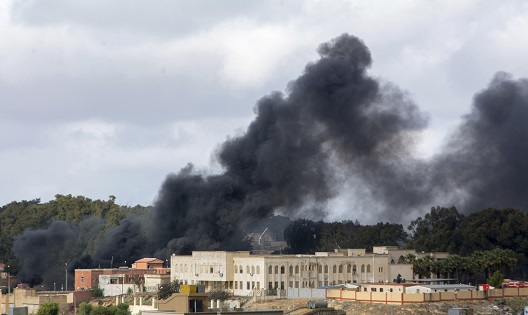 The Libyan quagmire has worsened. Last week, the country’s Supreme Court compromised the standing of portions of the elections law that led to the instituting of Libya’s elected parliament, the House of Representatives. Much controversy surrounded the vague decision and the circumstances in which it took place, exacerbating tensions between forces aligned with the Tobruk-based House and those aligned with the Islamist-backed Tripoli-based Operation Dawn alliance. The two sides have engaged in a violent power struggle for the future of Libya. The decision puts the international community in an awkward position, given its recognition of the House as the country’s legitimate government.

This development comes as Libya faces increased attacks from radical armed groups. Ansar al-Shari’a and its allies in Benghazi are currently engaged in hostilities with other residents and forces loyal to the elected parliament. The alignment of hardline elements in the Dawn coalition with the alliance in Benghazi—which includes extremists such as Ansar al-Shari’a—is particularly worrisome. Meanwhile in Derna, many radical Islamists have also sworn allegiance to the Islamic State in Iraq and al-Sham (ISIS).

Libya needs an internationally assisted roadmap to lead it out of this disaster and bring about national consensus, in order to allow the country to combat the radical security threats it faces, and begin the reconstruction process. This roadmap should include the following elements:

The international community is critical to this entire process—particularly the United Nations and the UN Support Mission to Libya, headed by Bernardino Leon, who has proven apt at building alliances. The role of a prime minister who can maintain unity is likewise vital.

Libya is far too fragile to withstand internal and external pressures. All regional and international actors involved must support the UN initiative without covertly interfering with Libya. The UN Security Council and its member states must support this initiative and empower the process with all means at their disposal.

This is a very delicate time, and the opportunity to initiate positive change before Libya goes beyond the brink is shrinking fast. Libya can recover and rebuild, or it can go over the precipice. The choice must be made now.

Dr. H.A. Hellyer is nonresident fellow at the Centre for Middle East Policy at the Brookings Institution in DC, and Associate Fellow in International Security Studies at the Royal United Services Institute in London. Follow him on Twitter @hahellyer.

Image: Black smoke rises from the scene of a bomb blast in Shahat, eastern Libya, November 9, 2014. A bomb exploded on Sunday in an eastern Libyan town where a U.N. special envoy was due to meet Prime Minister?Abdullah al-Thinni, but there were no casualties, officials said. One government official said at least one car bomb went off in front of the security headquarters in the eastern city of?Shahat. Thinni and U.N. envoy?Bernadino Leon?were due to meet in a different building, and a security official said the blast had been near the venue of the meeting of other government officials. REUTERS