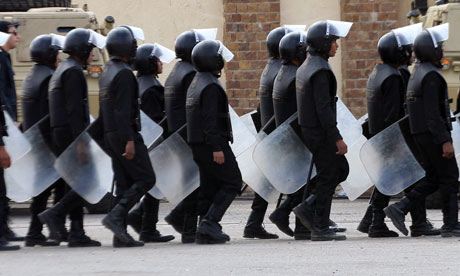 A year after the Egyptians voted overwhelmingly to approve the SCAF-drafted amendments of some articles of the constitution, few did know that the outcome of the referendum would jeopardize the future of the revolution, extinguishing the embers of the Arab spring – which is now turning into an Islamic winter, as described by Israeli Prime Minister Benjamin Netanyahu and his back-up Ismail Haniyeh, head of the Gaza sacked government.

Over the past year, the path of the Egyptian uprising has been distorted into a stalemate, rather than advancing the objectives of the revolution. Egypt is still dealing with the feudal cancer that has resisted reform for sixty years of military rule, and has seen entrenched authoritarian institutions go from bad to worse, now compounded by new and troubling developments, most notably the rise of religious ideology in politics and an empty nationalism that aims to isolate Egypt from the world.

Although Egypt’s uprising was a youth uprising led by a middle class armed with the tools of globalizing knowledge, the overall weak assimilation of modern knowledge values has strengthened the appeal of medieval religious ideology, and nationalistic sentiments derived from that was spurred on by a propaganda of foreign conspiracies that actively extended into hostility to peace and refusal of  membership in free world and modern human values and principles, including the values of tolerance, human rights and citizenship.

Despite warnings last March that Egypt was falling into the trap of military rule that threatened to extinguish the popular uprising, calls for stability prevailed, leading to the implementation of democratic mechanisms that lacked democratic values. Rather than paving the way for democratic development, the constitutional referendum consolidated the power of the ruling military council, which closely resembles its predecessor – the Free Officers – who staged a coup in 1952.

The SCAF’s policies over the past year have proven that the military is not mature enough to run a democratic transition. Within days of the overthrow of Mubarak, the military’s true intentions became apparent: the establishment of an authoritarian regime based on a temporary legitimacy granted to the SCAF after February 11, 2011. SCAF’s rapid slid into authoritarianism was just an inevitable result of the failure of a totalitarian regime based on a religious ideology.

The SCAF’s totalitarian aspirations became clear, with the help of leading Muslim clerics who led celebrations of Mubarak’s resignation in Tahrir Square in a scene reminiscent of Ayatollah Khomeini’s return to Tehran in 1979.

In using the constitutional referendum as an instrument to strengthen its own legitimacy, the SCAF relied heavily on its alliance with religious movements, most notably the Muslim Brotherhood. However, Egypt’s military rulers quickly realized that religious ideology was not sufficient to manage the looming problems bringing Egypt to the brink of state failure. Thus the military stepped up its campaign of violence against peaceful protesters, culminating the massacre of Christians outside of Maspero on October 9, 2011 – in which a friend of mine was killed. Compounding this crackdown was the military’s use of internationally banned weapons against civilians during what has become infamously known as the “massacre” on Mohamed Mahmoud Street on November 28, near the old campus of the American University, then around the Cabinet headquarters.

The administration of the parliamentary elections did not appear to differ significantly from the constitutional referendum in March 2011, however the elections were marred by new and more serious violations:  the scandalous manipulation of voter registration databases that were still under review by the judiciary and the clear bias of election officials toward Islamist candidates who benefited from media propaganda and the distribution of commodities produced by military-owned factories and farms to voters. Not only did religious parties and movements sway voters with these techniques, but they also used state-owned mosques to promote their candidates and attack their rivals – whether liberal, socialist or secular – who were calling for a civil state. These violations took place in the context of a weak judiciary lacking independence from the executive branch, as well as the absence of international monitors. Furthermore, the constitutionally dubious electoral law mysteriously redesigned and enlarged the country’s electoral districts in ways that clearly disadvantaged smaller parties and certain social groups. Thus, military and state institutions were fully complicit in the electoral victory of Islamists.

After successfully overseeing the installation of an Islamist majority in parliament – which has in fact been reincarnated as the new ruling party rising from the ruins of Mubarak’s former National Democratic Party – the SCAF began its second phase in restoring authoritarianism, which consisted of the dismantling of civil and liberal political forces through the farcical storming of NGOs supporting democracy and human rights.

In addition to the military’s full-blown assault on Egyptian civil society, the SCAF has also deliberately provoked a series of crises with Israel, most notably the diplomatic fallout resulting from its failure to intervene to prevent the storming of the Israeli embassy in Cairo, although hundreds of troops were stationed only a few meters away from the building. This deliberate incitement of strains with Israel bears resemblance to the acts of political theater surrounding the indictment of foreign as well as Egyptian NGO employees.

The Egyptian judiciary’s involvement in this politically motivated case has been characterized by endless violations of the rights of the accused. International Cooperation Minister Fayza Aboul Naga has incited public opinion against the defendants and their governments and fueled hostility toward civil society overall, using fiery rhetoric of a level not seen since 1968, when Egypt was at war with Israel.  Despite the lifting of the travel ban on the foreign defendants, Egyptian NGO workers – including many of my friends – are still accused and are in danger of imprisonment for five years, solely as a result of their efforts to support Egypt’s democratic transition.

Despite the SCAF’s promise to transfer power to an elected civilian government by the end of June, the military’s political track record and past performance suggest that the generals are pushing Egypt to the brink of economic collapse due to their mismanagement and insistence on an authoritarian model that maximizes the state’s interference in the economy. Not to mention the military’s control of at least a third of the country’s overall economic activity. On the diplomatic front, the regional schisms resulting from the SCAF’s clumsy foreign policy are becoming increasingly clear. In this context, the so-called elected civilian government is now torn between two poles: the military establishment and the Egyptian street, still energized by anger and hope.

Many Egyptians believe that the election of a new president will help bring an end to the current crisis, but Egypt is still dealing with problems that cannot be resolved overnight or at the ballot box: continued military rule, legal and constitutional turmoil, weakness of the judiciary, and the retreat of civil society over fears of new prosecutions. Furthermore, there are reasons to be concerned about the status and agenda of Egypt’s future president, given the rise of Islamist movements and the military’s continued domination of all state institutions.

In fact, Egypt’s future is now even more uncertain than it was last year and is raising alarm regionally as well as internationally. Egypt is in danger of becoming a new Pakistan in the Middle East and could transform into a fascist religious militarized state. Sadly, Egypt’s revolutionary dream of leading the region on the pathway to democracy is fading more every day.

Amr Bakly is the director of the Cairo Liberal Forum. Photo Credit: The Guardian