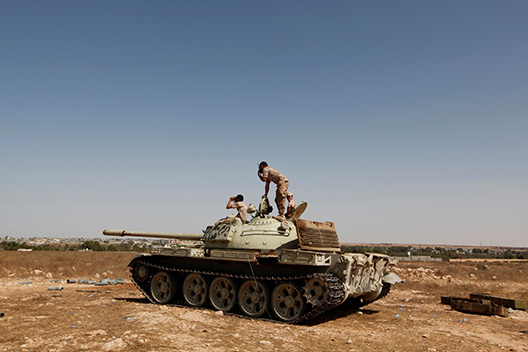 In early June, forces loyal to the UN-backed Government of National Accord (GNA) claimed to have entered the city of Sirte. Indeed, fighting continues in the last strong hold of the so-called Islamic State (ISIS) in Libya.  The defeat of ISIS in Sirte would be a significant development in the war against the group in Libya. However, the defeat would not mean the end of the group in Libya, and significant challenges and threats would still remain among the remaining forces in the Sirte region.

ISIS took control of Sirte and its surrounding areas in July 2015, crushing a brief uprising by local fighters from the Furjan tribe in Sirte, killing around 40 people and crucifying scores more. Since then, ISIS has worked to consolidate its power in Libya’s central region, a strategically important location due to the presence of vital oil and gas infrastructure.  From Sirte, the group was able to take control of a number of key towns including Bin Jawad, Nawfalyia, Harawah, and Abugrain among others, giving it control over an estimated 280 kilometers of Libya coastland on the Mediterranean. The group also attacked Libya’s two main oil terminals of Essdira and Ras Lanuf and key oilfields in the Sirte basin, causing damage estimated at billions of US dollars.

Following its defeat in the city of Derna in August 2015, Sirte became the group’s main stronghold in Libya, and the largest territory it controlled outside of Syria and Iraq.  Recent advances and gains by the GNA loyal forces, however, have reduced the territory ISIS controls significantly with GNA government forces spokesperson, Brigadier General Mohamed al-Gasri claiming that ISIS forces in Sirte are surrounded in an area to less than 20 square kilometers at the city’s center. The advance is said to have been slowed by snipers and landmines.

While the GNA has made the most significant gains against ISIS in Sirte, it is not the only military force in the area. Three different military commands are based in or around the city and the Sirte basin area.

One military command was set up by the GNA government, with the bulk of its forces coming from the city of Misrata. Other participating forces include the Border Control and Petroleum Facilities Guards (PFG) units led by Ibrahim Jathran and Col. Bashir Budhafeera. These units are effectively a group of armed federalists from the city of Ejdabyia and surrounding area, and they have been in control of Libya’s main oil terminals since the overthrow of the Qaddafi regime. Budhafeera and Jathran are strongly opposed to the GNA’s rival Eastern Libyan government, its Libyan National Army (LNA), and its commander General Khalifa Haftar. It is possible that they have chosen to support the UN-backed GNA government out of convenience to strengthen their position against the LNA’s expanding control in the eastern and central regions of Libya. This force is currently on the eastern front of Sirte specifically in Bin Jawad and Nawfalyia towns, along with some additional forces from Southern Libya. This military command itself is further divided between three different operations room—partly due to past rivalry and a lack of trust between the participating forces in this alliance.

The second military command falls under the LNA’s leadership, with their forces controlling vast swaths of the desert south of Sirte, including the towns of Zillah, Maradah, and more recently Ash Shwayrif. Participating forces in this alliance include those from the eastern and southern Libya regions and are supported in the western region by forces from the western cities of Zintan and Wershafana.

Since April, the LNA has deployed more than 6,000 fighters to the Sirte basin area according to sources close to the LNA. LNA opponents and critics say this was done to undermine the GNA government by expanding its military presence and control over the strategically important Sirte basin region. The soundness of the LNA’s mobilization in Sirte and the stretching of its forces and resources, has also been questioned given that, in the past two years, they have yet to achieve a decisive victory against extremist groups in Benghazi. In the end, the LNA never engaged in fighting against ISIS in Sirte. However, in speaking with tribal figures and key LNA supporters in Eastern Libya there is a belief that a western led conspiracy is undermining the LNA’s position and its leadership in their war on terrorism in favor of UN-backed forces. They reason that the UN-backed government declared its war on ISIS in Sirte only after the LNA had mobilized its forces towards the city to liberate it to prevent the LNA from taking credit.

The third military command falls under the authority of the defunct GNC and its chief of staff in Tripoli Jadallah al-Obaidi. This alliance, also in direct opposition to the LNA, is supported by key figures including the Grand Mufti Sadiq al-Gheriani, who maintains influence among key groups in Tripoli, as well as by some ex-commanders from the militant group, the Libyan Islamic Fighting Group (LIFG), such as Sami al-Saadi. The forces are led by a number of army officers, as well as, Islamist militia leaders who fled the fighting in Benghazi. The recently established “Benghazi Defense Brigades” that directly follows the controversial Grand Mufti of Libya is one of the most prominent militias in this military command.

This variety of military structures is partly due to the failure of the UN-led dialogue process to find concrete answers to military and security concerns in a post-Qaddafi Libya.

As the two-month advance appears to be nearing its end, the GNA and the international community should consider that, while achieving a unified military structure will take a considerable amount of time, they should focus on de-confliction between the various forces in the Sirte basin area by establishing a joint military command for non-extremist forces which would include forces loyal to the GNA and LNA forces. If GNA and LNA forces are able to work together following the defeat of ISIS in the area, this could prevent the rise of other extremist groups in the area, such as the Benghazi Defense Brigades, who could exploit divisions and infighting between the two groups.

Additionally, in a post-ISIS Sirte, if the GNA government repeats the mistake of relying on armed militias instead of professional army and police forces, it could cost the government much needed popular support due to the largely negative legacy of the militias’ role over the last five years. A win over ISIS in Sirte should not be an excuse for armed militias that played a part in that defeat to coerce the GNA into accepting them as the primary security force without rigorous vetting and proper disarmament, demobilization, and reintegration (DDR) and security sector reform (SSR).

And finally, with reports from sources close to the Benghazi Defense Brigades that some of the group’s fighters from are joining the GNA’s force fighting ISIS in Sirte, the international community and GNA must be careful that these forces do not exploit the situation to get their hands on new weapons as a result of the imminent partial lifting of the arms embargo on Libya by putting in place a robust mechanisms for assessment of the GNA’s request for concessions on new arms and equipment through the UNSC sanctions committee.

Mohamed Eljarh is a nonresident fellow with the Atlantic Council’s Rafik Hariri Center for the Middle East.

Image: A fighter from forces aligned with Libya's new unity government talks on a radio while his comrade uses binoculars to scan for an Islamic State position in Sirte, Libya June 30, 2016. Picture taken June 30, 2016. (Ismail Zitouny/Reuters)