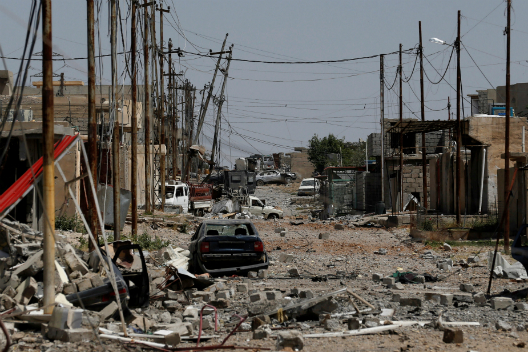 Debris is seen on a street controlled by Iraqi forces fighting the Islamic State fighters in north west of Mosul, Iraq, May 9, 2017. REUTERS/Danish Siddiqui

The fight against ISIS in Iraq is in full swing. Despite the costly human errors that caused the death of hundreds of Mosul residents, the offensive forces continue to make progress, having managed during the past months to isolate, besiege, and take control of over 60 percent of the city.

The battle for Mosul is particularly important because it could end ISIS’ presence in the region. Yet the crumbling and geographic disintegration of Islamic State (ISIS, ISIL, Daesh) does not mean an end to the war against it. Indeed, ISIS is set to transform into disparate gangs, groups, and cells that engage in Afghanistan-style retaliation attacks. Since 2001, the US has managed to put a lid on the power of the Taliban and al-Qaeda in Afghanistan. However, splits over religious ideology and the incompetent governments that assumed power over the last years allowed terrorist groups to resume their activity through individual attacks, such as the attack on Khost province in early April. This is proof that war against terrorism with weapons and air strikes is not enough to end the phenomenon. These countries need comprehensive development and governance programs built upon the resolution of political, social, and economic problems.

Post-ISIS Iraq will have its own peculiarities. Old problems have resurfaced, from determining the “owners” of disputed regions after their liberation and the related conflict among societal groups. Disputes over the provinces have returned to the forefront with the Kurds’ ambition to annex new regions of Iraq—namely, Kirkuk, Diyala, and Sinjar—to the Kurdistan Regional Government (KRG), which both Shia and Sunni forces oppose. Sunnis still fear Shia expansion through the Popular Mobilization Forces (PMF) and sectarian retaliation against Arab Sunnis. In fact, the Iraqi parliament passed a law legalizing the PMF—which happen to be Iran’s proxy in Iraq—turning it into a military corps separate of the army regulars, while the US-backed law on the National Guard, which Sunni forces rely on for balance on the ground, remains inactive due to opposition from the Shia parliamentary bloc.

In addition, regional and international forces continue to interfere in Iraq, contributing to long-term political conflict. These forces provide their support to militarily strong Iraqi parties, using them to settle their own political scores.

The oppression, sidelining, and deprivation of Sunni provinces of their political and social influence are on the rise. The performance of successive governments has generally declined and corruption has plagued their institutions. Services have deteriorated and poverty rates have increased. All of this is a major cause for future conflicts with the Shia forces in control, something that ISIS could exploit again to reinforce its popular base, expand clandestinely, and execute its murder and displacement scheme, taking advantage of the chaos and suppression prevailing in Iraq’s western regions.

The solution is simple: adopting reconstruction plans for Iraq, working to go beyond the mere restoration of stability, enabling and pressuring the government’s anti-corruption mechanisms to build a real balance among the various components of society, engaging western Iraq’s communities in reconstruction and reform, and providing services and education support based on the needs of society. This should be a priority in building a stable, properly recovering Iraq without leaving behind any scars that could be exploited to inflict new agonies on post-ISIS Iraq.

Looking back at the abilities of the US military, in light of the current political situation, it is obvious that the military is not the decision-maker in American politics. It is certainly aware of the conflicting nature of its mission—having to fight terrorism while at the same time exacerbating sectarian conflicts that increase ISIS’ appeal as it executes orders from the White House. In the meantime, the US administration only intervened in Syria and Iraq to make political gains at home and deliver on the campaign promises of US President Donald Trump. Trump has yet to appoint the types of mid-level personnel and analysts who would read this kind of article and share their thoughts and suggestions with the top leadership. In contrast, the US administration under former president Barack Obama had staffers who collected opinions and thoughts and shared them with the administration, but a useful plan was never implemented because of the president’s stubbornness.

The US must reconsider its policy in the region and rearrange its priorities in harmony with the overall strategy against terrorism to prevent extremist groups from forming and spreading.

But first of all, the US political system—including the White House and the Congress—must be convinced to take an interest in the events in Syria and Iraq apart from their influence on their own political lives. Had the US policy, including that of the executive branches—the Department of Defense and the State Department—been changed years ago, and had they acted with enough flexibility to change the course of events, things would not have been the way they are now.