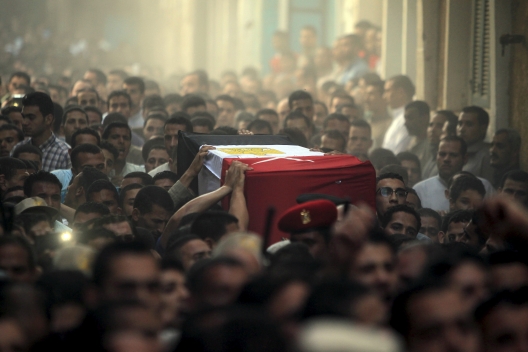 Photo: Relatives of 21-year-old Mohamed Adel, one of the army officers who died in the July 1 Sinai attacks, carry his coffin during the funeral in Al-Kaliobeya, near Cairo, Egypt, July 2, 2015. (Mohamed Abdel Ghany/Reuters)

Angry chants demanding the execution of top Muslim Brotherhood leaders are commonplace at funerals of security personnel killed in terrorist attacks. These calls now seem stronger than ever following the assassination of late Prosecutor General, Hisham Barakat, and the death of at least twenty-one soldiers and officers in clashes with terrorists late last week in northern Sinai.

President Abdel Fattah al-Sisi delivered a statement during Barakat’s funeral on June 30, in which he vowed to amend the laws to “achieve justice in the swiftest possible time.” He added, “If a death sentence or a life term is handed down, it will be implemented.” In what some have interpreted as a reference to the Muslim Brotherhood, he also said, “They issue their orders from their [court] cages, and the orders are implemented.” The Interior Ministry said it was tracking Barakat’s suspected killers, and was working on a plan to provide more security for top government officials and buildings. However, acting Prosecutor General, Ali Omran, quickly imposed a blackout on publishing any information on Barakat’s assassination on July 2.

While no group has officially claimed responsibility for Barakat’s assassination, the July 1 Sinai attacks were claimed by Egypt’s Islamic State affiliate, the Sinai State, previously known as Ansar Bayt al-Maqdis. The Brotherhood has officially denied any involvement in either incident, but some supporters seemed to gloat over Barakat’s violent death, claiming he was responsible for sending many of its members to trial. Aisha al-Shater, daughter of the Brotherhood’s Deputy Supreme Guide, Khairat al-Shater, went so far as to claim that security agencies could be involved in his death, noting that “in any case, it is enough that God could be punishing him” for ordering the bloody dispersal of sit-ins held by Brotherhood supporters two years ago, sending many of the group’s members to prison, and seizing their assets.

Since the army forcibly removed former President and Muslim Brotherhood leader, Mohamed Morsi, two years ago, nearly all top Brotherhood leaders have been put on trial, and over 1,000 death sentences issued. With Egypt’s lengthy legal appeals process, it could take up to five years before a final verdict is confirmed in the majority of these cases. This pace has left many dissatisfied with the legal system, despite the judiciary coming under fire for issuing swift, mass rulings.

“I want executions. Open the prisons now and execute them,” popular television presenter Ahmed Moussa screamed at the camera as he stood in front of his chair during his daily talk show. Referring to Morsi, the Brotherhood’s Supreme Guide, Mohamed Badie, and his deputy, Khairat al-Shater, he said: “Don’t we have death sentences against them? Carry them out now. I don’t want to hear a word about the Court of Cassation,” he added. According to figures released in March by marketing research company, Ipsos, Moussa’s talk show is among the most popular in Egypt, coming third only to shows hosted by Wael al-Ibrashi on Dream TV and Lubna Assal on Al-Hayat. Noting that seven death sentences have been carried out since Morsi’s removal by the army two years ago, he said, “What are seven death sentences? This is nothing. There can be no less than 1,000 executions in revenge. Only 1,000 heads is fair revenge for the Prosecutor General.” .

In a demonstration held in front of Al-Qa’ed Ibrahim Mosque in Alexandria on Friday, participants carried effigies of Morsi in a red prison jumpsuit, the color worn by convicts facing the death penalty. They reportedly also called for Morsi’s execution. Echoing Sisi, they said that the lengthy trial procedures failed to respond to the serious threat terrorism posed. They also called for amendments to the laws.

Meanwhile, security experts continue to call for harsh measures against the Brotherhood, including banning prison visits for six months and preventing the media from covering their trials in fear that that they would issue instructions to lawyers and supporters to carry out terrorist operations. These same experts, mostly retired army and police generals, are pushing for a scorched earth policy, with some calling for an expansion of the evacuation zone along the border between Egypt and Gaza. Following a coordinated terrorist attack against the army in Rafah in late October, Sisi ordered the evacuation of 1,500 meters of the Egyptian side of the border. The Egyptian military alleged that terrorists used tunnels between Egypt and Gaza to smuggle weapons and fighters. Former Assistant Interior Minister Mohamed Noureddine, however, said this was not enough, and demanded the army temporarily evacuate cities such as Sheikh Zuweid, with a population of 60,000, where the latest round of confrontations took place. Noureddine told EgyptSource, “We should totally evacuate Rafah and Sheikh Zuweid because they are centers for terrorists operations and to enable to armed forces to thoroughly search the area.” He noted that an article in a draft anti-terror law proposed by the cabinet this week would allow for such necessary measures “at a time of war.”

Human rights organizations, the press syndicate, and several political parties have criticized the anti-terror law, which has been referred to Sisi for his approval. They warn it violates many basic freedoms guaranteed in the Constitution, particularly in terms of the right to a fair trial and freedom of expression. The Press Syndicate held an emergency meeting on July 6 to protest a proposed article in the draft, which punishes “anyone who publishes information on terrorist operations contradicting official statements issued by concerned bodies,” with up to two years in prison.

Meanwhile, Mostafa Bakri, a journalist and television show presenter who claims close ties to the army, attacked those he described as “Western and US agents” for criticizing Sisi’s recent visit to Sinai in his military uniform. Sisi pledged in the speech he delivered announcing his presidential bid, “This will be the last time you see me in a military uniform.” Like many of the president’s supporters, Bakri said he was proud to see Sisi in military fatigues, adding that this made Egyptians feel more confident that the country’s top official was personally taking part in the war against terror. Many Sisi supporters changed their profile pictures on social media to photos of the president in his military uniform during his Sinai visit.

Following Barakat’s assassination, government and security officials, however, sidestepped criticism of the failure to provide security for the late Prosecutor General. Similarly, it is unclear how the Sinai State was able to amass up to 300 fighters, anti-aircraft missiles, and heavy weaponry for the July 1 attacks, despite military operations against militants in Sinai over the past two years. Instead, the government is choosing to rally the people behind the president and to accept more exceptional measures under the banner of “fighting terror.”

The official rhetoric claiming victory in Sinai, and calls to rally behind the “national army,” have created an atmosphere of intimidation preventing objective discussions in the local media of the consequences of the recent escalation of violence in Egypt, or whether soldiers in Sinai, mostly conscripts, are receiving proper training. In the first quarter of 2015, Sinai alone witnessed 156 attacks according to a report issued by Democracy Index, while terrorists killed well over 300 soldiers and policemen in attacks across the country in the period from October 2014 to this past April, according to research by the Tahrir Institute for Middle East Policy.

Questioning the government response has been met with serious consequences, even when these questions come from a relatively unknown soccer player. Ahmed al-Merghani, from the Wadi Degla soccer team, criticized Sisi on his Facebook page, describing him as a “failure,” and as a result, his club fired him. “You (Sisi) asked the people to give you a mandate to fight terrorism, and the people came out and filled the streets. However, since then, everybody has been dying, civilians, army and police,” he wrote. “You are responsible for every drop of blood spilled in this country,” Merghani added. Similar criticism has been limited to a few small news websites and blogs by critics of Sisi, operated chiefly by leftists and radicals. The overwhelming mood in Egypt, however, remains one of support for the government’s measures, and revenge against the perpetrators.